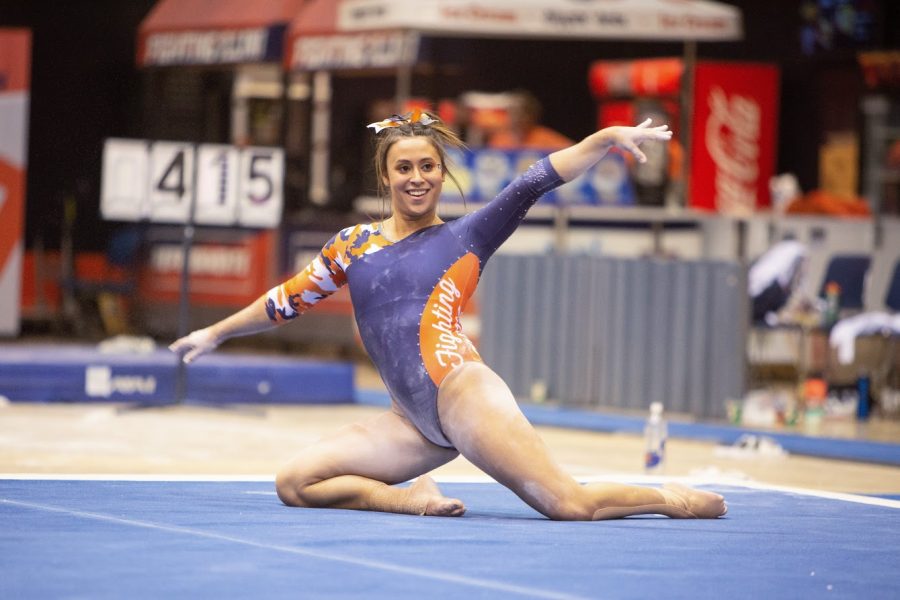 Senior Nicole Biondi competes in the floor routine during the meet against Penn State on Feb. 2 at Huff Hall. The Illinois women’s gymnastics team recenly resumed practice after an extended offseason.

With last season ending abruptly due to COVID-19, it was relieving for the women’s gymnastics team to finally be back in the practice routine after a long offseason, even if there were changes to the usual protocols.

“Previously we came in whenever we wanted and did as we pleased,” said senior Nicole Biondi. “But now we have to have designated times we come in and show up in our pod (the group of teammates we live with). To start practice we have to wash our feet, wash our hands, mask on 24/7 unless we’re actually doing gymnastics … other than that, our gymnastics is the same. I think the team is doing a really good job (of) following the protocols and doing what we can in the gym.”

Head coach Nadalie Walsh added how gymnastics is already a socially distant sport and is not as hard of an adjustment as other sports.

If an athlete tests positive for coronavirus, they have to miss at a minimum two weeks before returning to team activities. The mindset of the team is to make the necessary sacrifices in order to not hurt other members of the team.

“We continually tell them that it’s a privilege to be a student-athlete and part of the gymnastics program,” Walsh said. “There’s a lot more at risk for us … I constantly remind them not to live in fear or be full of anxiety. I really want them to learn to not feel these emotions when they’re out in public. We have a lot of trust built between the coaches and athletes.”

Trust has been an essential part of the team, as coaches are not worried about their gymnasts not following protocols; they see how determined their athletes are and see how much they don’t want to lose another season. Biondi added that trust is built into the Illini culture and is prominent in all sports.

They’ve worked their entire childhoods to get to this point, and they are not about to throw it all away through their own actions.

This culture was instilled when the gymnasts were going through the recruiting process. They quickly bonded with the coaches and upperclassmen, even more so this year.

“It was a really unique preseason in the sense we were allowed to let them listen in on meetings when we were on Zoom calls,” Walsh said. “We’ve had more communication and more foundation built with them than in the past. Even though they couldn’t be in the gym with us, I think the freshmen are just following the lead, and they’re doing a great job and they’re showing every day that they’re here for a purpose and they are not intimidated.”

Even when the team went home after the early end to the season, they stayed in constant communication with each other and the coaching staff. Their goal over the summer was to come out of the shutdown better than when they went in.

One way Biondi said they accomplished this is by posting pictures every day during the summer after a workout in their team group chat to motivate eachother.

Since they have come back, everybody has shown the work they put in during their long break, but sophomores Mia Townes and Olivia O’Donnell have particularly stood out.

“I know Mia Townes really busted her tail all year,” Walsh said. “She lived in Texas and was able to actually get in and do some weight training and things like that. I can see that she’s so much stronger than she was last year coming off an Achilles surgery. Olivia O’Donnell is another sophomore who recovered from an injury last year and she’s come back and is doing all four events and doing outstanding.”