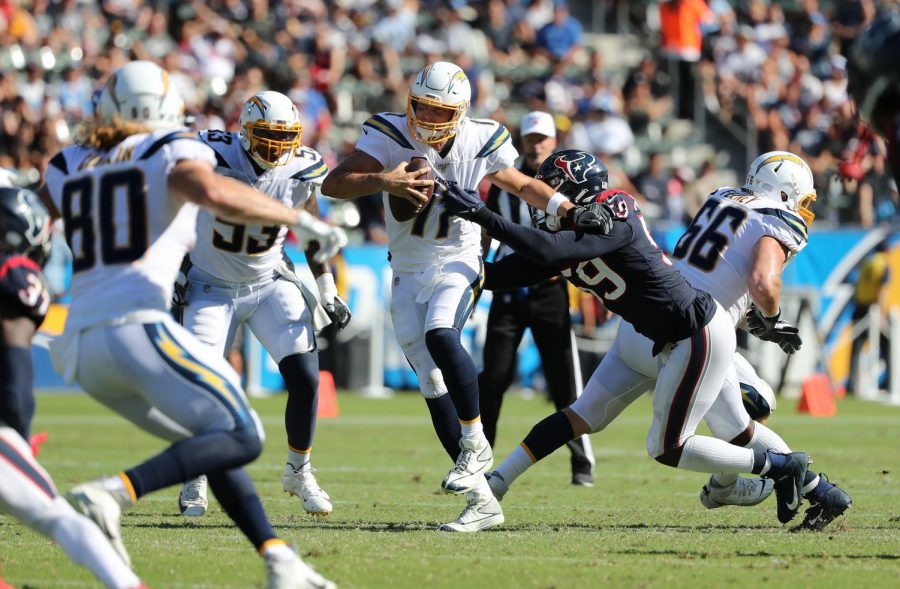 Los Angeles Chargers quarterback Philip Rivers tries to evade the sack of Houston Texans outside linebacker Whitney Mercilus and ends up fumbling on the play in the second half at Dignity Health Sports Park on Sept. 22, 2019 in Carson, CA.

While Big Ten football may not be back for another month, the National Football League wrapped up its second week of action over the weekend, with 10 former Illini currently listed on NFL rosters. Let’s take a look at how they’ve started the 2020 season.

Allegretti, the most recent alum of the Illini football program, returns to the Chiefs after winning the Super Bowl in his first year in the NFL. Though listed as the team’s backup left guard, Allegretti plays a majority of his snaps with the special teams unit, as he was on the field during the Chiefs’ game-winning field goal in Week 2 to defeat the Los Angeles Chargers 23-20 in overtime. The Chiefs are currently 2-0 after victories over the Houston Texans and the Los Angeles Chargers

After starting every game during his first four years in the NFL with the Cincinnati Bengals, Fejedelem signed a three-year contract with the Miami Dolphins and was named one of the team captains prior to the 2020 season. He has not played a game yet after being sidelined with a pectoral injury, though he hopes to return on Thursday against the Jacksonville Jaguars. The Dolphins are off to a tough start, losing their opening two games of the season by a combined 13 points.

Hardee enters his fourth season in New Orleans, though he is slotted behind the more experienced Janoris Jenkins on the depth chart. He has registered a tackle in each of the team’s first two games and has seen decent playing time on defense. The Saints are 1-1 on the season after a Week 1 victory over the Tampa Bay Buccaneers and Week 2 loss to the Las Vegas Raiders.

Karras, the only other active Illini alum who has won a Super Bowl ring during his NFL career, enters his fifth year in the NFL, though this is only his first as a Dolphin after four years and two championships with the New England Patriots. Karras is the Dolphins’ starting center and one of the team captains, and he has started both games of the season thus far, though the team is still looking for its first win of 2020.

The most experienced Illinois alum in the NFL, Mercilus enters his ninth season as a Houston Texan. Starting both games thus far, he has collected three tackles, with all of them coming in the team’s Week 1 loss to the Kansas City Chiefs. Though the team is 0-2, they have faced arguably the two best teams — and two best quarterbacks — in the league in Patrick Mahomes and the Chiefs and Lamar Jackson and the Baltimore Ravens.

The 2020 season saw Phillips named to his first 53-player active roster, and he saw action in Week 1 on the special teams unit during the Bills’ victory over the New York Jets. Phillips, listed as the team’s second-string linebacker, was sidelined with an injury in Week 2, though he will likely return to face the Los Angeles Rams in Week 3. The Bills have started the season undefeated.

Smoot is playing his fourth season in Jacksonville, and he is considered the team’s second-string defensive end. Smoot has recorded one tackle so far in 2020, coming in the team’s Week 2 loss to the Tennessee Titans. The Jaguars sit at 1-1 after two weeks of action, and they will play fellow Illinois alumni Fejedelem and Karras in Week 3.

After being claimed off waivers from the Green Bay Packers on Sept. 6, Turner has yet to see action in Dallas on the offensive side of the ball, though he has gotten playing time on the special teams unit, playing 28 snaps so far. Slotted behind wide receivers Amari Cooper, CeeDee Lamb and Michael Gallup, Turner could get some playing time in the event any of them get injured. The Cowboys are 1-1 after a 20-point comeback victory of the Atlanta Falcons in Week 2.

Ward enters his fifth year as a pro, and the Ravens are his third team in the NFL. Ward has earned some playing time on the defensive side of the ball despite being listed as a second-string defensive end. Ward has registered one solo tackle and seven assisted tackles so far in 2020 and has helped the Ravens to a 2-0 start after impressive wins over the Texans and the Cleveland Browns.

2020 is Wilson’s first season in Indianapolis and his ninth in the NFL. While he has gotten three snaps on defense, Wilson sees a majority of his playing time on special teams, though he is yet to register any tackles on the season. The Colts are currently 1-1, falling to the Jaguars in Week 1 before defeating the Minnesota Vikings in Week 2. Expect him to get some more playing time in the coming weeks.