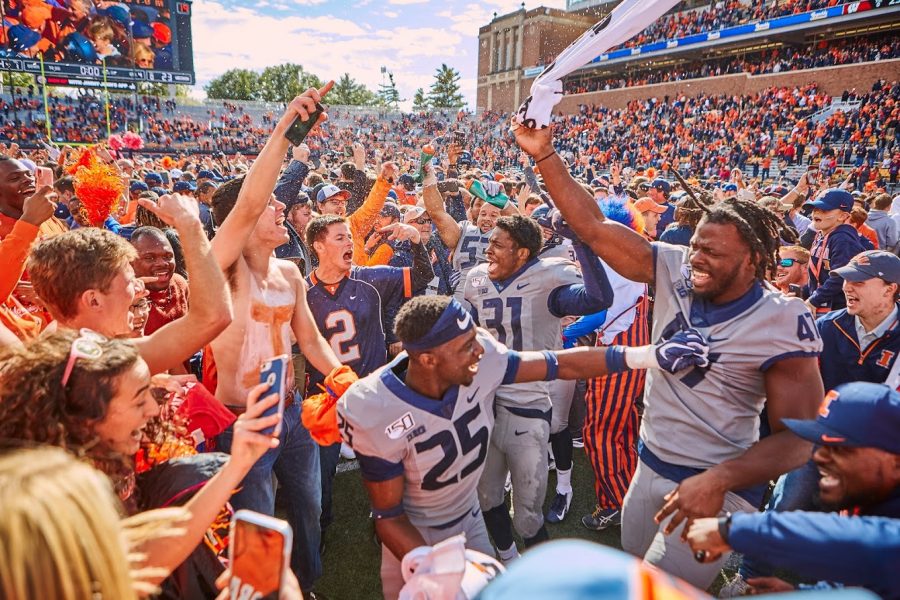 The Illini football team and fans commemorate their win against the Badgers on the field of Memorial Stadium.

Last season, Illinois’ football program was at a crossroads. After starting 2-0 with wins over Akron and University of Connecticut, Illinois stumbled, losing four in a row. Eastern Michigan simply outplayed Lovie Smith’s squad. Nebraska ripped out Illinois’ heart, preventing head coach Lovie Smith from getting a signature win. Minnesota and Michigan ran all over the defense, scoring 82 points against then-senior linebacker Dele Harding and company. Smith saved his program, and perhaps his job, though, against the unlikeliest of teams.

Last season, despite being 31-point underdogs, the Illini shocked No. 6 and then-undefeated Wisconsin Badgers 24-23, ending hot seat talk and sparking Illinois’ hottest stretch of football since 2007. In just over a month, the Illini will play a rematch against the Badgers on the road in the season opener, hoping to shock pundits again.

Amid COVID-19 and all of the postponements, this is the most talented team Smith has had. Illinois returns the 12th-most production in the country, along with key pieces on both sides of the ball, specifically senior quarterback Brandon Peters.

While Peters was inconsistent at times — passing for only 78 yards against Nebraska — he proved to be invaluable to his team’s success when he was locked in with wide receivers while utilizing his legs. Although he doesn’t look like a dual-threat quarterback, Peters has hidden speed and instincts that allow him to extend plays. Against the Badgers, a diverse offense is essential for an upset.

The Badgers come into this season ranked No. 12 despite losing some key pieces. After three years of gashing defenses, running back Jonathan Taylor forgoed his senior year and entered the NFL draft.

For most programs, losing a running back who averaged over 2,000 rushing yards a season would be a massive blow. But for Wisconsin, who has produced NFL running backs such as Montee Ball, Melvin Gordon and James White, any running back they place in will create some damage. Still, senior quarterback Jack Coan will have to step it up with his arm to keep defenses honest.

Coan has not shown he can consistently will his team to score with his arm, as he was able to ride off Taylor’s coattails. Although his stat line looks efficient — 18 touchdowns and five interceptions — Coan was untested, as he only threw for over 200 yards in four Power-5 games.

The key for Illinois — or any team that plays Wisconsin — is stuffing the run game or at least slowing it down. Although Taylor was still able to crack over the century mark for rushing, Smith and his defense didn’t allow any big plays. After slowing down the attack, turnovers were key in turning the tide, the trademark of the Smith defense.

Although the Badgers have question marks with their offense, the defense is projected to pick up exactly where they left off.

Before the Illini shocked the Badgers, Wisconsin had one of the most dominant half-seasons in recent college football history. In their first six games, they allowed a total of 29 points and recorded four shutouts. While the Badgers started to show cracks down the stretch, they still finished in the top 10 in total defense and scoring defense.

Smith has rebuilt the program by getting creative and taking advantage of new recruiting tools. Illinois will never be able to compete nationally against the Ohio States of the world when it comes to recruiting, but Smith adapted and made Illinois into a transfer portal hotspot. Players like Peters, junior tight end Luke Ford and senior wide receiver Josh Imatorbhebhe — who came from Michigan, Georgia and University of Southern California, respectively — have found a new home where they can showcase their talent that got overlooked at the blue blood schools.

Smith has got his best team prepared, but it’s unfortunate Illinois fans only get a shortened season to see his work. This team has eight regular-season games and one extra crossover game to show off their progress. And while Smith would probably like a few non-conference games before diving right into Big Ten action, the fact is the Badgers are waiting in Madison as they prepare to defend their division crown.

But if the turnover-forcing Lovieball is in store, as well as Peters’ ability to keep the defense honest, Illinois could replicate last season’s magic and shock the college football world.