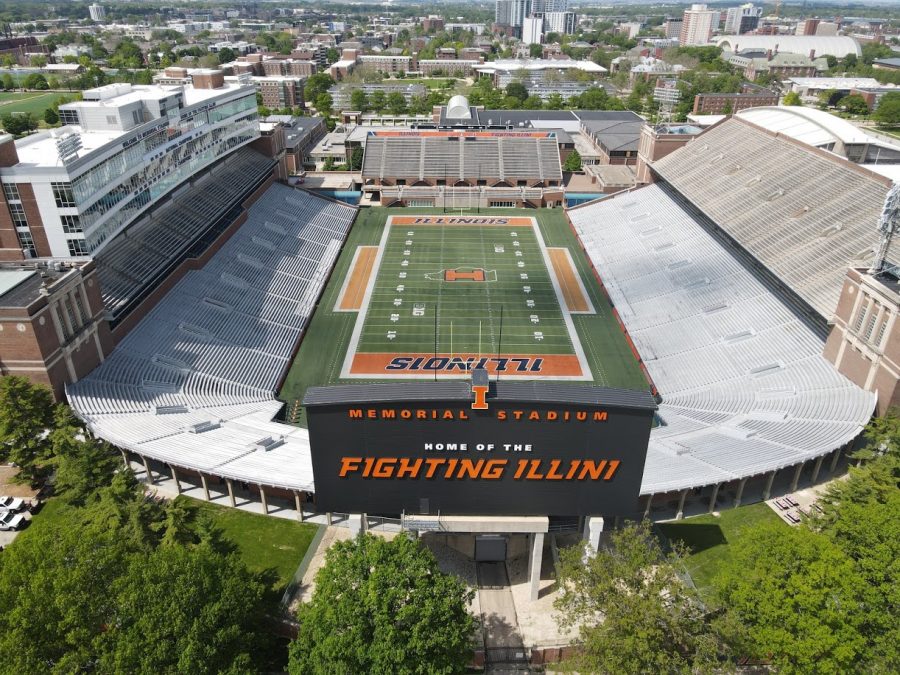 An aerial view showcases the scale of Memorial Stadium on May 23. Louisiana State University and Oklahoma’s upsets on Saturday opened up spots for Big Ten teams in the college football playoffs.

Although college football has been back for a few weeks, this past Saturday felt like a return to normalcy with the return of the Southeastern Conference. While the Big Ten still has a few weeks until they resume play, Saturday provided one of the most unpredictable opening weeks in recent memory.

Defending national champions Louisiana State University expected to take a step back. Aside from losing Joe Burrow, the Tigers lost double-digit starters and both of their coordinators. The after effects were apparent.

Mike Leach and the Mississippi State Bulldogs shocked the Tigers on the road 44-34 behind a monster performance from K.J. Costello, who passed for over 600 yards and five touchdowns. LSU became the first defending champion to lose a home opener since the 1998 Michigan Wolverines.

Spencer Rattler and Oklahoma Sooners blew a three-touchdown lead against Kansas State, who got upset against Arkansas State earlier this year. Although Rattler, who’s the first non-transfer to start for the program since 2014, put up some sparkling stats, he struggled down the stretch with turnovers, finishing with three interceptions. This is the second consecutive year the Wildcats have upset head coach Lincoln Riley and the Sooners.

Alabama and Nick Saban came out strong against the Missouri Tigers on the road, winning 38-19. With Tua Tagovailoa out of the picture, quarterback Mac Jones and his receiving core took over with ease, scoring 28 points in the first half. The Crimson Tide, who haven’t won a national title since 2017, look hungry and ready to reclaim college football’s top prize.

Head coach Tom Herman has battled inconsistencies since leaving Houston for Texas, with a Sugar Bowl and a six-loss season on his resume. Quarterback Sam Ehlinger saved Herman from hot seat talk after the Longhorns came back from a late deficit to hold off Texas Tech in overtime, 63-56. In what has been a rough year for the Big 12, Texas was able to save face and keep their playoff hopes alive.

After a season of watching painful, inefficient offenses, the Miami Hurricanes have come alive under Houston transfer quarterback D’Eriq King.

Miami whacked rival Florida State 52-10, cementing their status as an ACC front runner and college football playoff contender. With the turnover chain, combined with the arrival of King, Clemson has a new worthy opponent who can rival them for ACC supremacy.

Although the Big Ten doesn’t resume play until Oct. 24, the conference got a huge boost with the recent upsets. With LSU and Oklahoma losing at home, the possibility of getting two teams in the playoffs has gained traction for the Big Ten.

Ohio State, a national championship contender, has the easiest path to the playoff with the amount of the talent Urban Meyer and Ryan Day have collected. Wisconsin and Penn State have the most realistic shot to steal a second playoff spot.

The Pac-12, who doesn’t start until November, might not have enough games to qualify. The top contenders in the Big 12 have struggled out of the gate, and the SEC suffered a big blow with LSU being upset. If Ohio State finishes 9-0 and another team finishes 8-1, the Big Ten could send two teams to the playoff for the first time ever.