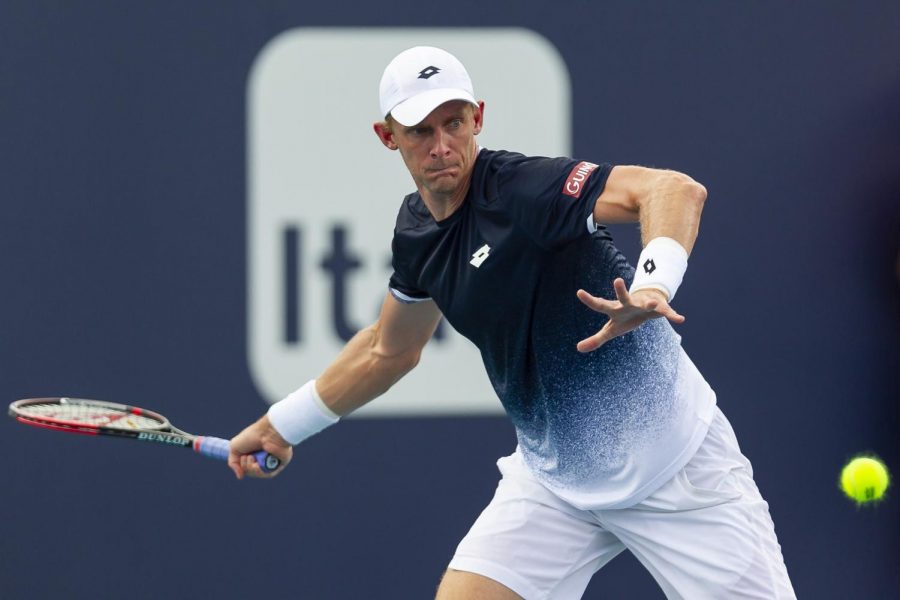 Kevin Anderson returns a shot to Joao Sousa during their match at the Miami Open on March 25, 2019. Anderson played tennis for three seasons at Illinois, winning the national doubles championship his sophomore year in 2006.

After months of inactivity due to the coronavirus pandemic, sports have returned, though not without a few minor issues along the way. While we still have to wait another month for the Illini to take the field once again, let’s take a look into how former Illini have performed in their respective sports. Note: former Illini in the NFL will not be included; please see last week’s story for an update on the 10 Illini currently on 53-man rosters.

2020 marks Roark’s first season with the Blue Jays, which is his fourth big league team since leaving Illinois in 2007. The shortened season has been a bit rough on him, as he has a 7.01 ERA across 10 appearances this season, with a record of 2-3. Roark features prominently as a starting pitcher, and while the Blue Jays have already clinched a postseason berth, it is unclear what his role will be in the playoffs, as the team also features the likes of Hyun Jin Ryu and Robbie Ray.

Gerber is the latest Illini to make his MLB debut, appearing out of the bullpen against the Los Angeles Angels on Aug. 4. Gerber has looked really solid since making his debut, allowing one or more runs on only three of his 15 appearances thus far, while he has a 3.21 ERA. Though he features out of the bullpen, Gerber earned his first professional win against the Texas Rangers on Sept. 5. Though the Mariners are out of playoff contention this season, expect to see Gerber in the majors next year and beyond.

After averaging 6.1 points and 5.1 rebounds per game across 51 appearances during the regular season, Leonard has only played in one playoff game for the Heat thus far, getting nine minutes of action and two assists in Miami’s Game 3 victory over the Milwaukee Bucks on Sept. 4. Though he has not contributed in the Eastern Conference Finals series against the Boston Celtics so far, Leonard still remains available off the bench if needed. Miami is currently one win away from the NBA Finals.

Nunn has featured a bit more prominently than Leonard, though neither player has received consistent playing time in the playoffs. Averaging 29.3 minutes and 15.3 points per game in the regular season, Nunn has seen both statistics drop in the playoffs, as he is averaging only 11.5 minutes and 3.2 points per game in nine appearances. This is still only his rookie season, so expect his game time to increase in the future after gaining essential playoff experience this season, though he has the chance to make the NBA Finals in his first year in the NBA if the Heat secure one more victory against the Celtics.

Anderson has featured in three events since tennis resumed, though he has struggled after the long break. Anderson competed in the ATP Masters 1000 Cincinnati, falling in the Round of 32 to world No. 6 Stefanos Tsitsipas, 6-1, 6-3. The Johannesburg, South Africa native also faced early-round exits in the U.S. Open and ATP Masters 1000 Rome, falling in the first round in both competitions.

Ram featured for the Chicago Smash in its debut season in World TeamTennis in July and August, guiding the team all the way to the finals before ultimately falling to the New York Empire in heart-breaking fashion, 21-20. More recently, Ram has competed with his doubles partner Joe Salisbury in the U.S. Open, making it to the semi-finals before falling to duo Wesley Koolhof of the Netherlands and Nikola Mektic of Croatia. Ram also announced he will be a volunteer assistant coach for the University of California men’s tennis team.

Vukic participated in the Ostrava Open, falling in the Round of 32 to Germany’s Oscar Otte in three sets, 3-6, 6-4, 6-3. The Sydney, Australia, native saw more success in the Moneta Czech Open, making through four rounds of competition before falling in the quarterfinals to eventual tournament champion Kamil Majchrzak of Poland, 6-4, 6-1.

Pieters also competed in the U.S. Open, and he got off to quite a hot start. The Antwerp, Belgian, native shot four under par on day one which saw him tied for second place, and only one stroke behind the leader going into the second round. Pieters struggled during the final three rounds, shooting a combined +14 over the three days. He would go on to finish tied for 23rd place after four rounds.

Stricker participated in the U.S. Open as well, though he was unable to make it through all four rounds of the competition. Shooting four over par after the first day of the event, Stricker failed to make the cut after the second round, shooting +7 on day two and +11 overall.

Though there are other Illini competing on teams overseas, none of those leagues have started yet, leaving DiBernardo as the sole Illini to compete since soccer’s return. DiBernardo has featured in both of the Red Stars’ two games of the NWSL Fall Series, though she also played a prominent role in Chicago’s run in the NWSL Challenge Cup in which the team ultimately fell to the Houston Dash in the finals. Across two games in the Fall Series, DiBernardo has started both games, and she bagged a goal and an assist in the team’s 4-1 win over Sky Blue FC. The team has two more games before wrapping up the season.