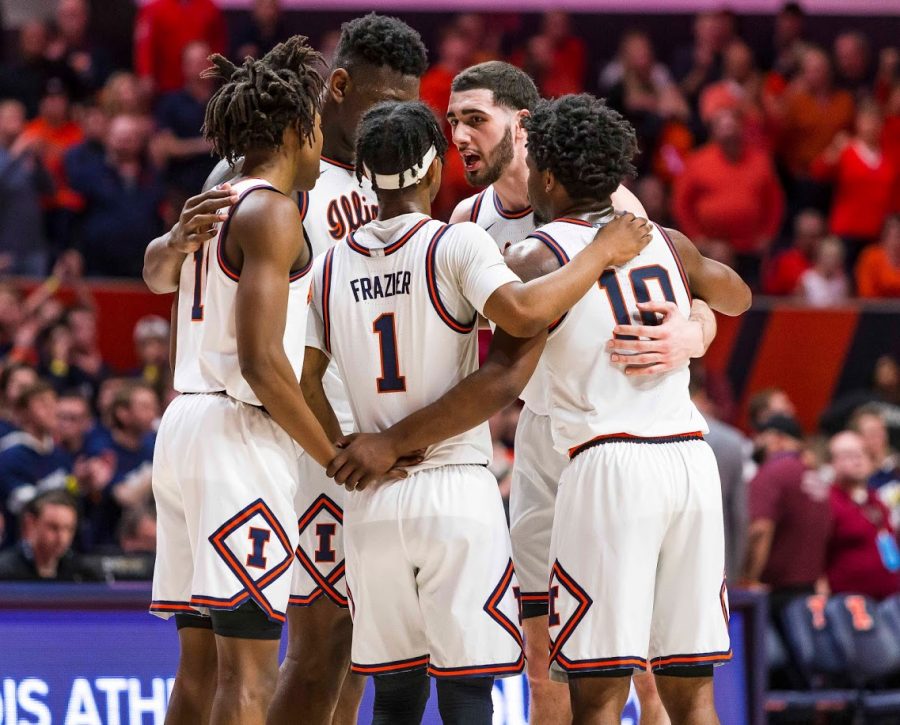 The Illini huddle up during the game against Indiana on March 1. Illinois is highly ranked in multiple preseason polls.

With September ending, we are getting closer to the start of NCAA Basketball. On Sept. 16, the NCAA approved moving the start date of the 2020-21 men’s and women’s basketball season to Nov. 25.

Illinois men’s basketball had its promising season cut short in March before the Big Ten Tournament. With the returns of junior guard Ayo Dosunmu and sophomore center Kofi Cockburn, newcomers like freshman guards Adam Miller and Andre Curbelo and established seniors Trent Frazier and Da’Monte Williams, the experience and talent are in abundance for Illinois. Many people feel the Illini have a good chance of being a top team in the nation this year, and the rankings reflect that.

For Illinois fans, it’s no surprise Andy Katz has Illinois ranked as the highest Big Ten team in the nation. He has been on the Illini wave for a while now. Katz is high on Dosunmu and Cockburn coming back and the coaching ability of Brad Underwood.

Katz has Gonzaga at No.1, Baylor at No. 2 and Villanova at No. 3, all above Illinois. And while the Illini are the top-ranked Big Ten team, Iowa and Wisconsin are right on their tail. The Big Ten, which is stacked, has three teams ranked in the top-10 and eight in the complete 36-team ranking.

Between the two heated competitions from last season, Luka Garza and Dosunmu both trying to have a stake in the Big Ten Player of the Year award and both teams looking to win the Big Ten, Iowa is no doubt one of Illinois’ biggest threats this season.

Parrish made a lot of Illini fans happy when he says that, for the Illini, “a trip to the Final Four is a realistic goal.” That’s something even some casual Illini fans hoped could be a possibility last year before the tournaments were canceled. The difference this year is if the Illini stay atop the rankings all year, they won’t need a semi-Cinderella run to make it.

Parrish, along with everyone else, is in agreement the key for Illinois is Dosunmu and Cockburn. But, he has Iowa ranked above Illinois by one spot on the back of Garza, who he thinks is the clear preseason favorite for the Player of the Year award.

In ESPN’s rankings, the Illini went from unranked to No. 7 after the return of Dosunmu and Cockburn. Borzello sees the experience of the Illini as one of the biggest assets.

“Dosunmu will earn preseason All-American attention,” wrote Borzello. “And Cockburn is a dominant big man down low. Illinois returns five players who started at least 22 games last season, and there is going to be competition due to the additions of ESPN 100 guards Adam Miller and Andre Curbelo.”

Borzello has the Illini as the third highest-ranked Big Ten team behind Iowa at No.5 and Wisconsin at No 6. Borzello is big on Garza and his potential Wooden award campaign, but Iowa shares the same experience that Illinois has with players like Jordan Bohannon, Joe Wieskamp and CJ Fredrick all returning.