Shorter practices may be Illini’s secret to success 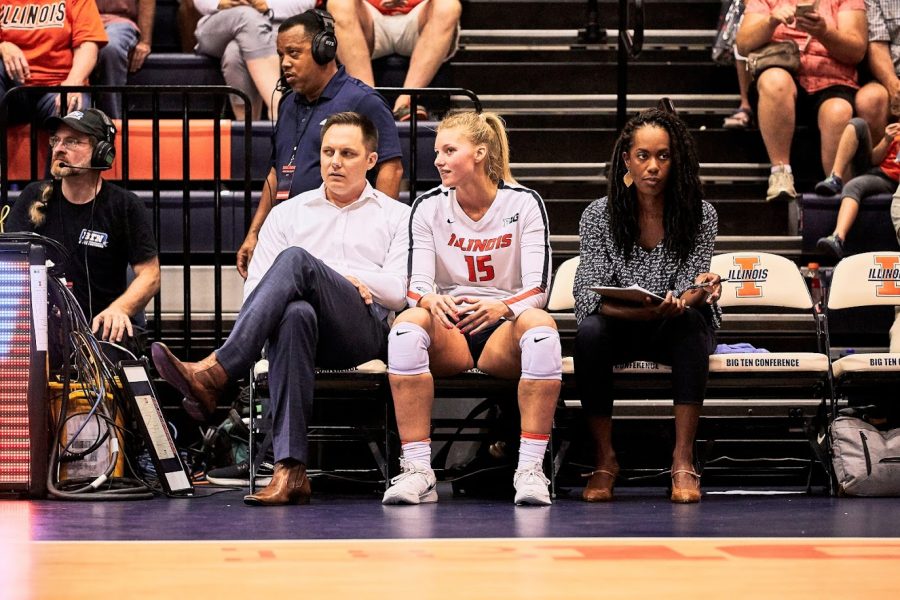 A typical Illinois volleyball practice looks different from most college programs across the country for one key reason: brevity. Head coach Chris Tamas has brought a ‘less-is-more’ philosophy to the program and now has the results to back it up.

One of Tamas’ goals when designing practices is to match the speed and feel of a real match. As a result, practices focus on scrimmaging and typically range from an hour and a half to two hours long, the length of an average volleyball match. To compensate for the shorter length, Tamas expects his players to be ready to give maximum effort the second that practice begins.

“I don’t want to take 25 minutes to get warmed up,” said Tamas. “You’re (expected to be) warm when you step in, and your first rep better be as intense and intent as your last rep.”

As a kinesiology major in college, Tamas learned of different theories as to how to practice most effectively. The most popular theory among most coaches is what Tamas calls “multiple reps theory,” which argues the more repetitions players put in, the more they will improve. However, Tamas believes that fewer but more intense reps may be most effective.

“I feel that if you’re going to get good at this game then you want to maximize every rep that you have,” said Tamas. “It’s not necessarily about how long we can be in the gym, it’s about how to go as hard and as fast as you can for that hour and a half to two-hour block and really train as if you were in a game.”

Beyond his background in kinesiology, Tamas also credits his approach to his time on the U.S. national team along with reading coaching books and scientific studies. When describing Illinois practices, “efficient” has been the most common word among players, such as setter Diana Brown and hitter Megan Cooney. According to Cooney, Tamas will often end practices early when he feels the team is working hard and locked in.

Another large benefit to Tamas’ approach to practice is the potential for injury-prevention due to the overall lower number of reps the volleyball team takes.

“For our positions that jump a lot like middle blockers and outside hitters and setters, we want to make sure that we know that we’re not going to put so much load on them that they’re going to get injured,” said Tamas. “We definitely have load management, making sure that we’re tracking jumps. That’s a part of the reason that we practice a bit shorter than most teams would as well.”

Over the past few years, the concept of load management has risen to prominence across sports, such as in the NBA where players routinely sit out of games and practices to reduce their injury risk. While Tamas has utilized his efficiency-focused approach since the day he became head coach of Illinois, the proliferation of load management as a widely-used, effective strategy has certainly reinforced his belief in it.

Due to his strong belief in reducing the overall loads on his players’ bodies, Tamas doesn’t like the idea of doing a team conditioning test.

“It’s really tough to say that (we should do a conditioning test) because, in our game, it’s a marathon run by 100 or 150 sprints depending on how many rallies that you end up having,” said Tamas. “We have 10 to 20-second bursts of going as hard as you can.”

While overall conditioning is important, the nature of volleyball lends itself towards staggered movement, allowing players to rest between rallies. If players were to spend their summers exhausting their bodies in order to pass a conditioning test, their injury risk may increase, and mental burnout could become a factor.

A large risk with shorter practices and less of a focus on offseason conditioning is accountability among players to stay in shape. According to Tamas, however, it hasn’t been an issue as he takes special care during recruitment to make sure his players will buy into his culture.

“I don’t want to have to explain to someone how to work hard,” said Tamas. “We should have already seen that in their tournaments or in their practices that we’ve seen. I would say our roster is very much built around that”.

If all else fails, players know Tamas will not hesitate to cut their playing time with such a competitive and deep roster at his disposal.

Tamas has emphasized that he feels he has the results to back up his style of practice. With a Final Four appearance just two seasons ago, he has certainly earned the respect to conduct practices however he thinks will best help the team win. The only question now is whether or not his practice model can work with a new group of players. If it can, the sky may be the limit.