Illini draft prospects have season to prove themselves 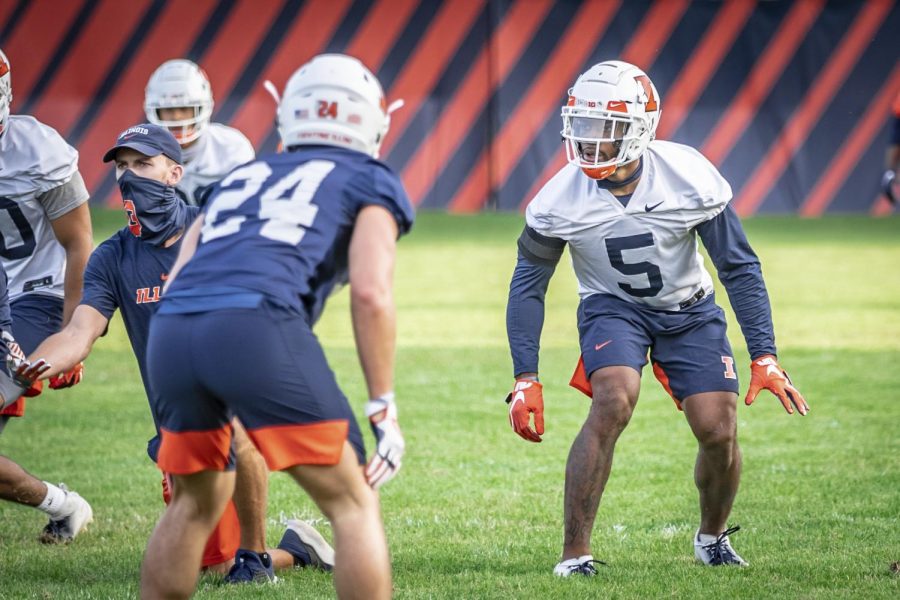 Senior linebacker Milo Eifler stands ready before the play during football practice on Sept. 17. Eifler is one of several Illini that will consider the NFL Draft after the fall.

On Aug. 19, eight days after the college football season was postponed, the NCAA announced it would grant an extra year of eligibility to all fall athletes whether or not they participated in a fall sport or not. This affects each of the 27 seniors on Illinois’ football roster, even more so the ones that are considering the NFL after college.

The Illini haven’t had a player drafted into the NFL since Nick Allegretti was taken in the 7th round by the Kansas City Chiefs in 2019, but that’s expected to change this year. Senior offensive lineman Alex Palczewski is almost a lock draft pick at right tackle and could be as high as a mid-round pick. Redshirt junior Kendrick Green is also expected to forego his senior season and enter the draft. Following Palczewski and Green, however, there aren’t any sure-fire picks, which leaves a number of Illini seniors with an important decision to make following the conclusion of this year’s college football season.

Doug Kramer, a center who was ranked by Pro Football Focus as the third-best returning center in the country, will be on a lot of people’s draft boards for 2021. Kramer is strong and has been productive over his last three seasons at Illinois, though he is undersized. An undersized lineman, especially at the center position, needs to show dominance in order to get drafted. Kramer has shown why he’s considered one of the top centers in the Big Ten, which is why a lot of people think Kramer should slide into the draft in the later rounds. If the nine-game season doesn’t end with Kramer as a likely pick, he could use an extra year to improve his game and consistency and potentially end up in the NFL. But, any improvements should land Kramer in the late rounds of the draft.

On the defensive side of the ball, linebacker Milo Eifler is in a similar position to Kramer. The odds lean in his favor right now to sneak into the draft, but Eifler still has improvement to show in order to be a certified pick. Like Kramer, without any improvement season this fall, we may see Eifler back another year to raise his draft stock if needed.

Daniel Imatorbhebhe, a tight end transfer from USC, would need a tremendous season this fall in order to get drafted. However, this will be Imatorbhebhe’s sixth year in college. Considering he would need to improve a dramatic amount to reach the NFL — and he would be choosing to enter a seventh year taking classes — it isn’t likely to see him back after this fall.

Offensive lineman Vederian Lowe and wide receiver Josh Imatorbhebhe are key offensive pieces that could raise their draft stocks more than anyone this fall. Both have a high ceiling and unique skill sets but were far too inconsistent last season to get drafted after their junior years. Both would have to take big steps this fall in order to be considered for the draft, which may make them more likely to come back for an extra year. Consistency is the key for Lowe and Imatorbhebhe this fall.

Defensive back Nate Hobbs is in a similar position. Hobbs is fast and athletic and forced enough turnovers last season, but he lacked consistency. He has the second-best odds on the defensive side of the ball to get drafted, but without showing consistently in his senior season, Hobbs could come back to increases of getting to the NFL.

Jim Nagy, the executive director of the Reese’s Senior Bowl, named Brandon Peters as his Big Ten quarterback that benefits most from playing this fall. The key to Peters is his consistency. He is above-average on his feet and can throw an accurate ball. An above .500 season record-wise should put Peters’ name on the draft board.

Most likely to stay

Defensive back Tony Adams, running back Mike Epstein, wide receiver Trevon Sidney and defensive ends Isaiah Gay and Christian Bell are all seniors with some draft potential that need standout seasons to be good enough for the draft after this fall. If anyone in this group is serious about a future NFL career, barring a breakout season, they would benefit from another year at Illinois.

Punter Blake Hayes and kicker James McCourt are two of the top special teams players in the country after impressive junior seasons, but they’re at positions that only see one or two players go each draft, making the pair more likely to stay. Hayes has already expressed interest in staying another year, and McCourt has not commented on his eligibility. If both do stay an extra year, it will keep Illinois’ special teams game as one of the best in the country.

Needless to say, Illinois has a lot of unknowns for the 2021 season. The NCAA’s decision to grant an extra year of eligibility could bring back multiple key players for the Illini on both sides of the ball, but only time will tell if players take advantage of the rule.