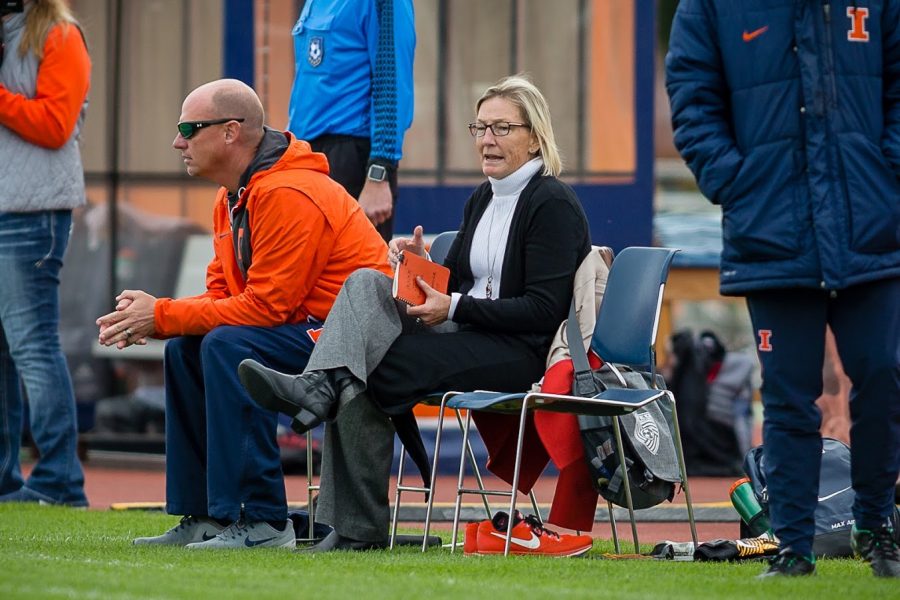 Illinois head coach Janet Rayfield shouts directions at her team from the sideline during the game against Indiana at the Illinois Soccer Stadium on Oct. 14, 2018. The Illini won 1-0 in double overtime.

Illinois soccer head coach Janet Rayfield has an extensive history in soccer. She’s been head coach for almost 20 years and has been one of the most successful coaches in program history. However, even before her time at Illinois, she played collegiate soccer in an era where women’s soccer isn’t like it is at Illinois right now.

Like most kids, Rayfield played soccer when she was younger. After moving to Colorado around third or fourth grade, her mom wanted her and her six other siblings to get to know the other families and kids in the neighborhood. The YMCA was down the road from their house and her mom signed all of them up.

“Soccer was the program they (YMCA) were starting that summer and had lots of spots available and they told my mom that it was throw a ball out and a lot of running around ‘she said that’s great’ and signed us all up,” Rayfield said.

Rayfield has played soccer ever since. During the time she grew up, soccer wasn’t as popular. It was a sport that was still growing in the United States, so there were not any high school or even college teams for Rayfield to play on.

Without high school soccer, Rayfield played club soccer instead. It wasn’t until after her senior year of high school where she was given the chance to play something other than club soccer.

“I was set to go to a small school in Colorado and potentially try to walk on to their volleyball team and then Coach (Anson) Dorrance called from North Carolina that summer and offered me an opportunity to play college soccer,” Rayfield said. “I hadn’t even thought about it until that moment in time.”

With Dorrance set to the task of creating a women’s team at the University of North Carolina at Chapel Hill, he had to recruit. While at a U.S. Soccer state representative meeting, Dorrance approached Rayfield’s club coach about any recent graduates who were skilled enough and had the grades to get into UNC.

Rayfield’s good grades, which she pushed herself to get in high school, paid off for her.

“I always tell student-athletes this, but the best thing you can do is be prepared for the opportunity that you don’t know is coming and I think this is a perfect example,” Rayfield said.

After being accepted into UNC, Dorrance established a collegiate women’s soccer team in 1979. Rayfield went on to play for the Tar Heels from 1979-1982.

“It was certainly a unique experience to be a part of a team that goes from the Junior Varsity basketball practices or tryouts to try and find a goalkeeper to all of a sudden winning a national championship in a three-year time span,” Rayfield said. “Just being a part of that was amazing in some ways and really challenging in others.”

Over Rafield’s four years at UNC, some of her greatest moments were winning an Associate for Intercollegiate Athletics for Women (AIAW) National Championship and the first NCAA Championship.

“We hosted it (AIAW National Championship) at the University of North Carolina and we played in the football stadium. We won the national championship at home in front of probably 3,000 people,” Rayfield said. “It was a very special moment, that was the first time my parents had come to see me play at North Carolina.”

In Rayfield’s junior year in 1981, Nike had compiled a list of the top soccer players in the United States. The list was always full of men, but this one year in particular Rayfield’s name popped up and she was the only female on that list. Rayfield was then named as one of the Nike Soccer Players of the Year.

“It was a huge honor and kind of a shock and surprise because women’s soccer wasn’t held to the same esteem that men’s soccer was, but that was an indication that things were starting to change,” Rayfield said.

By the end of Rayfield’s collegiate soccer career as a forward for the Tar Heels, she had been named an All-American, Nike Player of the Year, Two National Championships (1 AIAW and 1 NCAA), while ranking third in all-time goals at 93.

After graduating in 1983 with a Bachelor of Science in Mathematical Sciences, equivalent to the modern-day computer science degree. She took one last trip with the UNC women’s soccer team to Europe, then came back to the states and immediately started to look for a job.

While job searching, Rayfield received a call from someone she knew in youth soccer, offering her to coach an under 12 soccer team as well as connect her to get a job with either Texas Instruments or E-Systems.

Once accepting a job offer from E-Systems, she went on to coach the U-12 team and that’s where her coaching career set off.

Now almost 20 years at Illinois, Rayfield has 202 wins as a coach under her belt and has seen the team and program grow a lot.

Senior midfielder Maggie Hillman said that Rayfield understands her and her teammates more than any of her previous coaches have.

“She cares so so much about the players here, you just feel like there’s nothing that can go wrong,” Hillman said. “You know you can approach her with anything regardless if it’s soccer or life or anything like that, you know she’ll listen and be able to work around whatever it is.”

With understanding your players, it’s also important to make people feel included. Junior Ashleigh Lefevre, an international student from Australia, has never felt left out during her time on the team.

“Even though I’m an international student, Janet (Rayfield) has not treated me any differently,” Lefevre said. “I’ve never felt out of place on the soccer team and that’s because she has not only been able to give me those opportunities to develop relationships within the team, but she also hasn’t shoved me as an outcast.”

Having a long history with Illinois, Rayfield says that she feels like she has a really deep root in the soccer program.

“It’s like a perennial plant, the roots are really deep so you know it’s going to come back next year, but the flowers that bloom, you’re never tired of the blossom and the bloom that comes year after year,” Rayfield said “Every team is a little bit different and that difference is what I think that keeps you going over time. The longer you’re here, the deeper the roots and the more history you have.”