Block I to host watch party for football season opener 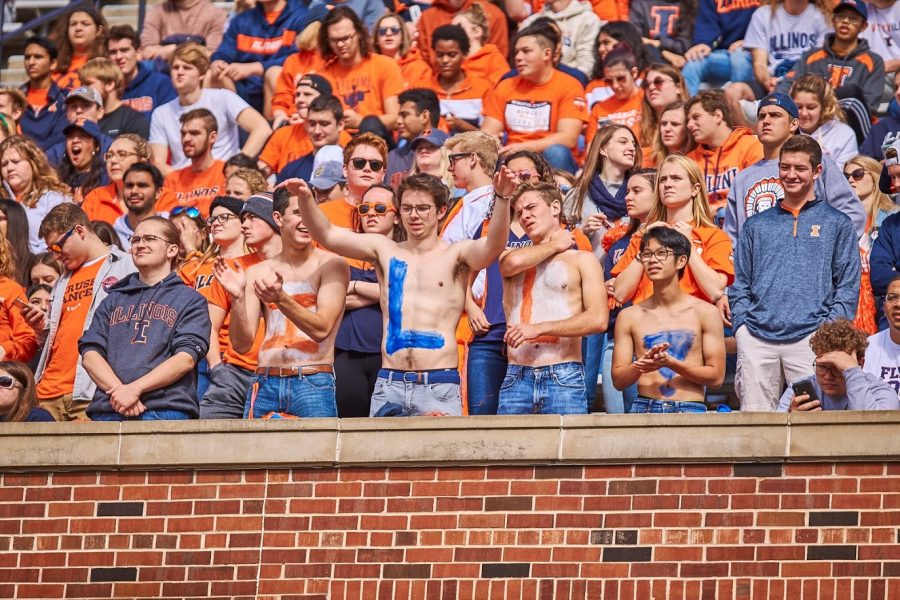 Students in the Block I fan section cheer during the game against Wisconsin on Oct. 19. Block I is a student organization that allows students to show their support for Illini sports teams; the group will be hosting a watch party for the return of the football season.

With the Big Ten announcing the return of college football on Sept. 16, Illinois players, coaches and fans all rejoiced as they realized they would be able to see arguably the best team of the Lovie Smith era compete in 2020. For Block I, this reinstatement meant going into overdrive to figure out how to safely allow students to watch games while following COVID-19 guidelines.

Block I is a branch of Illini Pride, the organization that allows students to support all of the University’s varsity sports teams. After the Big Ten announced all games would be played without fans during the fall season, Block I had to make adjustments.

John Sullivan, junior in AHS and vice president of Block I, considered holding events outside the realm of Illinois football. Now that football is returning, he believes watch parties and events can be conducted safely.

The organization’s first planned event will be a watch party at Memorial Stadium for Illinois’ season opener against Wisconsin.

“People will be able to come and social distance and sit on the field,” Sullivan said. “We are going to try and do a card stunt during that and try to do some other fun stuff.”

Sullivan says there will be no entrance fee, though students must show their Safer Illinois app status before being admitted. While students do not have to make any reservations in advance, Block I is trying to organize a pint glass giveaway for seniors, who will need to RSVP before showing up at Memorial Stadium to receive the free item.

The University will be selling concessions during the event, as well as alcohol to students 21 and over.

It is unclear how Block I will hold events after the watch party, as Sullivan says they want to see how the first week goes before moving forward. All membership fees were refunded because students can’t attend games, meaning Block I can’t hold as many events as they would like due to a smaller budget.

“Our biggest thing is without a budget we can’t do many events,” Sullivan said. “We are going to try and do some indoor events when the weather starts to get colder in November and early December, but it’s going to be really difficult to do that with all of the COVID-19 restrictions.”

To keep students active in Block I and Illini Pride, Sullivan says the group has considered holding contests at watch parties and over social media, though nothing is set in stone at the moment. Students can join an email list where they will get notified about Illini Pride news and announcements. Illini Pride will also be launching an online store where students can purchase Block I, Illini Pride and Orange Krush merchandise, with an anticipated launch date set for Oct. 15.

Like most things these days, many of Illini Pride and Block I’s plans for the 2020 season are still up in the air. Though students may not be able to attend live games at Memorial Stadium, Block I still hopes to create a fun gameday environment through watch parties at Illinois’s home stadium.