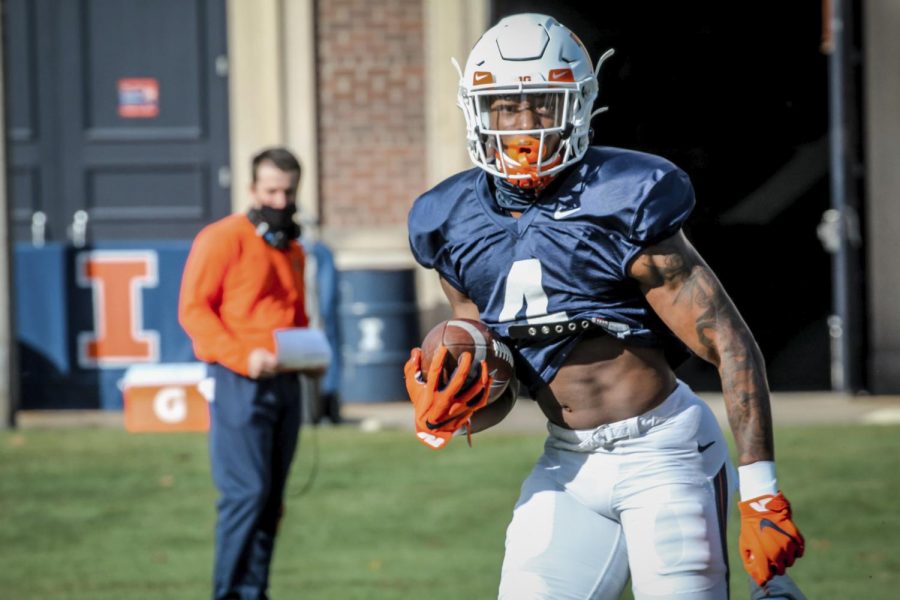 Sophomore wide receiver Khmari Thompson stands ready with the ball at football practice on Thursday. Thompson adds speed and strength to the team after transferring from Missouri, measuring in at 6-foot-1-inch and 220 pounds.

Brian Hightower, a four-star recruit and former University of Miami commit, has impressive size and athleticism. He only had 12 receptions for 148 yards and two touchdowns over two seasons at Miami, but he’s filled with potential. Hightower had offers from Alabama and Clemson, among others, coming out of high school, and his 6-foot-3-inches, 220-pound frame provides great size for Peters to target.

Thompson never played real minutes at Missouri but has impressive speed. He is 6-foot-1-inch, 220 pounds and is a former track runner, so the redshirt sophomore adds strength and speed to the group.

Thompson and Hightower were granted immediate eligibility, and Smith says he’s excited for the skills they can bring to the team.

“Whenever you bring a transfer in, you have to really like their skillset coming in,” Smith said. “We thought (Hightower) would be a big body with sure hands and someone that can compete hard every down and that’s what we’ve seen from him … Khmari a bit more speed and a bit more quickness, he’s a punt returner also, so we like the skillset both of the guys have brought to the mix so far.”

Desmond Dan, a two-star recruit who played at New Mexico State, had an impressive freshman season as an Aggie. He caught 37 receptions for 491 yards in 2018 before suffering a season-ending ankle injury shortly into the 2019 season. Dan has the most experience of the three and will be expected to make a difference for the Illini, though he won’t be on the field this fall because he wasn’t granted immediate eligibility.

Navarro has already gotten to work with the new additions in practice and is impressed with what he’s seen so far from Thompson and Hightower.

Senior cornerback Nate Hobbs has also gotten to work with them, facing the new receivers in practice, and says he likes the depth they bring. It is important to have both Thompson and Hightower eligible for this year, Hobbs says.

With a senior quarterback and a proven offensive line, the offense is expected to be a bright spot for the Illini this year, and the receiver position fits into that. Returning players such as Imatorbhebhe, Navarro, senior Trevon Sidney and sophomore Casey Washington will lead the way, with the newcomers in Thompson and Hightower also expected to make an impact. Lovie Smith has gone to the transfer portal for many positions but continues to make a splash at the wide receiver position.