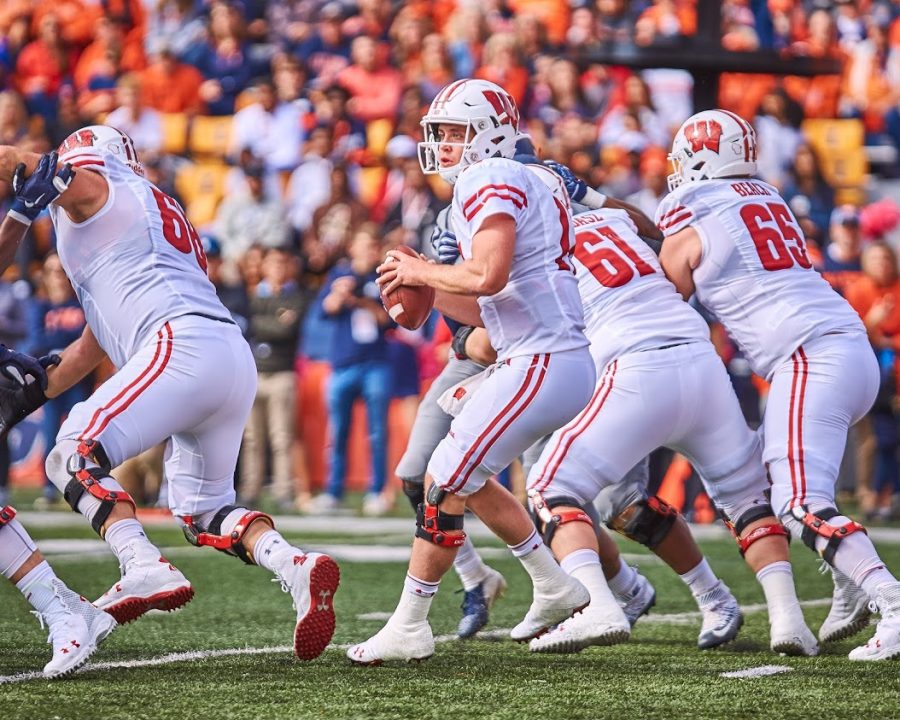 Wisconsin quarterback Jack Coan scans the field before throwing a pass during the game against Illinois at Memorial Stadium in Champaign on Oct. 19, 2019.

Another week of college football is in the books, meaning we are closer to the beginning of the Big Ten football season. Some high-profile opening week games for the Big Ten include Michigan taking Minnesota, Ohio State playing host to Nebraska and finally Lovie Smith and Illinois looking to upset Wisconsin in Madison. Still, Oct. 24 is far away, so Big Ten fans will have to tolerate SEC, among other conferences, for a little longer.

During a pandemic, it makes sense upsets are occurring on a regular basis.

Spencer Rattler and the No.18 Oklahoma Sooners squandered a fourth-quarter lead, falling to the Iowa State Cyclones 37-30. The Cyclones, led by fifth-year head coach Matt Campbell, used a balanced attack and a late interception to upset the five-time defending Big 12 champions. It was the Cyclones’ first win over the Sooners at home since 1960.

Rattler, who came into the season with Heisman hype, played well throughout the game, finishing with 300 yards and two touchdowns. However, when trying to lead his team to a game-tying touchdown, Rattler threw an interception in the endzone, ending the Sooners’ rally. Oklahoma is now 0-2 in the Big 12 for the first time since 1998.

After surviving a scare against Texas Tech last week, Texas’ luck ran out against Texas Christian, getting upset at home 33-31. Fans of the Longhorns are now floating the idea of booting Tom Herman out of Austin and replacing him with Urban Meyer, although it’s just talk. Still, “Texas is back!,” the phrase made famous by announcer Joe Tessitore, looks more misplaced every year.

The Georgia Bulldogs dominated the Auburn Tigers at home 27-6, cementing their status as a College Football Playoff contender. After a very subpar outing against Arkansas last week, Georgia came ready to play, jumping out to a 24-0 lead. Despite losing quarterback Jake Fromm and numerous NFL talents, Kirby Smart proved he doesn’t rebuild, he reloads.

In other news, Arkansas won its first conference game since 2017, knocking off No.16 Mississippi State at home 21-14. Clemson won yet again, blowing out Virginia 41-23. Alabama routed Texas A&M 52-24, making Aggie fans wonder if Jimbo Fisher will ever take them to the next level.

Wisconsin received bad news that quarterback Jack Coan has suffered a foot injury and could be out indefinitely.

Coan, who finished last season with 18 touchdowns and five interceptions, provided a steady presence for the Badgers, who usually rely on their running game. With Coan out, it appears sophomore Chase Wolf and freshman Graham Mertz will battle for the top spot.

Minnesota, on the other hand, received a pleasant surprise when wide receiver Rashod Bateman announced he’s returning to school after originally opting out of the season.

Bateman was fantastic last season, finishing the year with 1,219 yards and 11 touchdowns. A top target for quarterback Tanner Morgan, Bateman can help lead the Gophers to their first Big Ten West division title.

Ohio State is projecting a $107 million deficit for the 2021 fiscal year, showing the impact the coronavirus has had across all sectors of America. Ohio State, however, is far from alone when it comes to fiscal turmoil. In times like these, pay cuts to coaches become regular, and maybe even elimination of some athletic programs in worst cases.

The Illini are back in full pads as they get ready for their first game in just under three weeks. Hailed as Lovie’s most — likely — talented team, there’s one glaring difference between other years: experience.

The Illini have 25 seniors on the roster, more than 2018 and 2019 combined. Players like Nate Hobbs, Jake Hansen and Doug Kramer, who have been with Coach Smith since the beginning, have the chance to give Illinois their first winning record in conference play since 2007.

Illinois’ first opponent, Wisconsin, could have suffered a huge loss at quarterback if Coan is declared out for the season.

With Coan out as well as losing Jonathan Taylor to the NFL draft, the Badgers are battered on offense. Despite that, the Badger defense expects a big season, making a 13-10 type of game against the Illini appearing more likely.