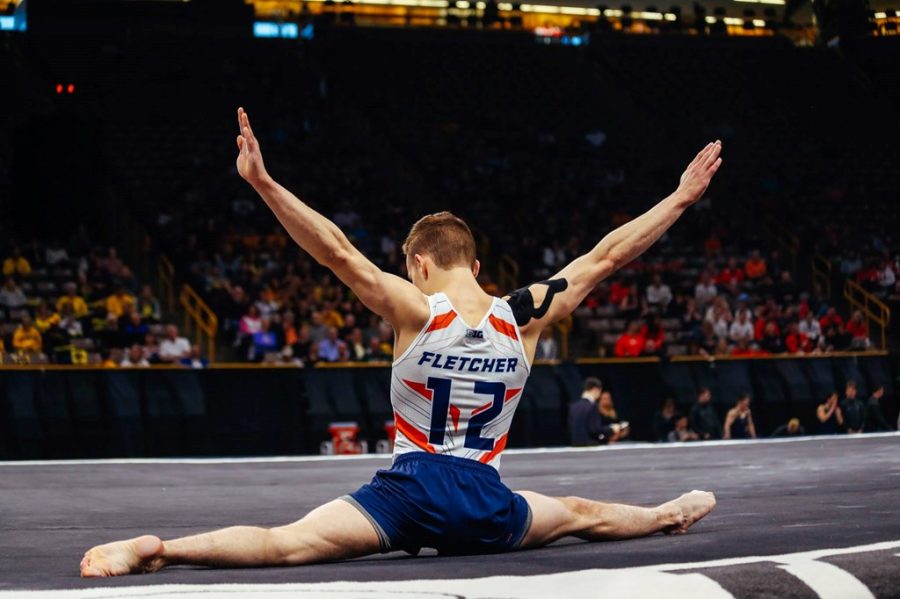 Redshirt junior Michael Fletcher performs the splits while competing at the Big Ten Championships on April 6, 2019. Fletcher and Clay Mason Stephens return to practice with the Illini after sustaining injuries.

Juniors Michael Fletcher and Clay Mason Stephens are once again practicing in Kenney Gym after the pair redshirted the 2020 season due to ACL reconstruction surgeries. Over the last 19 months, the two of them combined for three ACL reconstructions and have spent the majority of that time recovering from their injuries.

Fletcher tore his left ACL in August 2019 while competing in the U.S. National Gymnastics Championships. Although he was able to have his reconstructive surgery fairly quickly, it wasn’t until the following January that he was able to start light practice. Those months of inactivity took a mental and physical toll on him.

“It was tough for a while,” said Fletcher, who focused on his upper body during that time. “It was hard to find the motivation to work out without doing gymnastics because that has always been my way of working out. It did put my body at a disadvantage for a while, and I think I did lose a little bit of strength and endurance, but I guess that’s understood when it comes to injuries.”

Once Fletcher was able to start practicing again, it was a slow easing back into the sport. He was unable to practice on floor or vault, and although he could practice on all of the other apparatuses, he couldn’t practice dismounts. Because this easing was expected to last the majority of the 2020 season, Fletcher chose to redshirt the season to retain a year of eligibility.

“Those were big elements that I was missing last year that stopped me from competing,” Fletcher said. “I wasn’t in a shape or health standpoint to actually compete in a way that would help the team.”

While Fletcher was easing back into the sport, Stephens had mostly recovered from his own ACL reconstruction that happened five months before Fletcher’s did. As a result, Stephens was able to compete at full strength in 2020, but between finishing his recovery and attempting to qualify for the Olympic Games in Tokyo, he would’ve missed much of the Illini’s season. He also chose to redshirt the 2020 season.

But in a cruel twist of fate, just months after finishing his recovery, Stephens tore his left ACL while competing in Australia, and the Olympics ended up being postponed to 2021 because of the COVID-19 pandemic.

The pandemic led both gymnasts to experience difficulties with finishing or starting their recovery processes. Stephens’s reconstruction surgery was delayed by a month, and both gymnasts had limited access to the resources they needed.

“I wasn’t able to get into a gym,” Stephens said. “A lot of time was taken away when it comes to having the right equipment and rehab facilities.”

Because of travel restrictions, Stephens was unable to fly home to Australia, so he spent most of the summer in Champaign. He did gain access to the weight room and rehab facilities in Memorial Stadium to start the process, but it wasn’t ideal.

“I was able to get back in fairly early, but the extent of what I could do and the time that I had in there was limited,” Stephens said. “Going to (Memorial) Stadium twice a week was great, and I was super lucky that I had that opportunity, but still, if the gym was open, I would’ve been in the gym every day.”

March would’ve been the time when Fletcher would’ve started running, tumbling, jumping and landing his dismounts. When the pandemic hit, Fletcher said that it “threw a pretty big wrench” into his recovery.

“I was able to get some physical therapy at home during the pandemic, but it wasn’t as good as it could’ve been because I wasn’t able to get into the gym and train like I used to,” Fletcher said. “A lot of the recovery process with the lower body comes with doing jumps on the floor and the springboard and landing on mats. It’s not easy for a normal person to get access to that stuff.”

Five months after his reconstruction surgery, Stephens is currently in a similar position to where Fletcher was in January: no vault, floor or dismounts for now, but he hopes to start practicing on those within the next month. Stephens is also hoping to be fully recovered by February when Australia restarts its Olympic qualification process.

Fletcher, on the other hand, is fully recovered. By the time he competes again in January, assuming the NCAA season starts on schedule, Fletcher will have gone nearly 17 months without competing. He’s looking forward to that day.

“I’m so excited to be back in Huff Hall and to get through a great routine and stick the landing,” Fletcher said. “Freshman year, those were my favorite moments, and I can’t wait to get back there. I’m more excited than anything else just to get back to competing for Illinois again.”