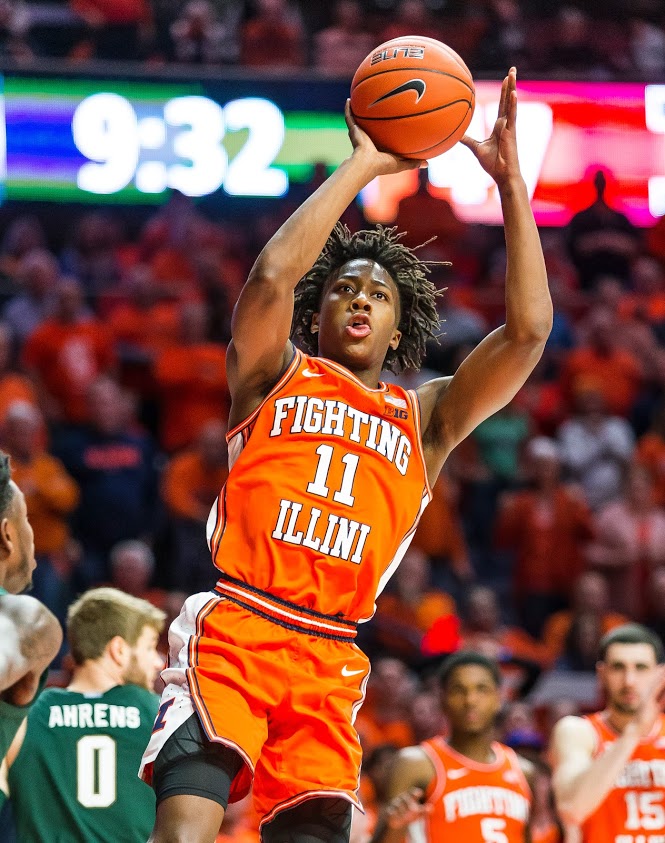 Sophomore Ayo Dosunmu shoots the ball during the game against Michigan State on Feb. 11.

Ayo Dosunmu’s sophomore season was, by all means, a success. The Chicago native was better across several stat categories to lead Illinois to a 20-win season. He could have turned pro, but Dosunmu elected to return to Champaign for a third season. Let’s breakdown where Dosunmu excelled and what he can improve on.

Finishing for Dosunmu is a bit of a mixed bag. He was masterful in transition, using an array of floaters and one-legged finishes to convert. But Dosunmu largely struggled in the halfcourt. He was in the 32nd percentile in shots around the basket. He does a good job of using his length to get to the rim but lacks vertical pop when there. He added strength but was still uncomfortable around contact. His 23.7 free throw rate was fifth on the team and in the bottom half nationally.

With the addition of freshmen guards Andre Curbelo and Adam Miller, the Illini will theoretically push the pace more this season. That should favor Dosunmu, but Illinois will need him to finish around the rim better in the half-court and get to the free-throw line more often.

Dosunmu’s shot mechanics have greatly improved since he was in high school. He gets much better elevation and releases the ball at a high point. He does have a tendency to kick his legs when he shoots, often leaving him off-balance.

Improving his jumper could take Dosunmu from a very good college player to an elite one. With the addition of a pass-first creator like Curbelo, Dosunmu should get more open looks.

In the open court, Dosunmu has elite speed. He uses his long strides to excel from one point to another. He’s got an excellent pull-back dribble but needs to improve on his counters to offset defenders. Dosunmu also excels at reading and using ball-screens.

While Dosunmu’s assist numbers increased last season, he still has room to grow as a passer. He has a tendency to take contested shots at the rim, as opposed to kicking to shooters. Dosunmu does pass well out of the pick and roll, whether it is dumping to a big or making a skip pass to the corner or wing.

Defensively, the Illini don’t task Dosunmu with too much. Trent Frazier and Da’Monte Williams typically take the tougher assignments. When engaged, Dosunmu can use his speed and flexible hips to make good rotations. On the ball, he can disrupt ball-handlers at the point of attack with his length.

Dosunmu has room to grow, but even as a sophomore he was first-team All-Big Ten. With veteran guards out of the league, Dosunmu could be the best guard in the league. He and Iowa’s Luka Garza will be preseason favorites for Big Ten Player of the Year.

With more scoring options on the roster, Dosunmu could see a decline in usage rate. But, the addition of Curbelo and Miller could create more open looks for Dosunmu and help his efficiency. It’s not inconceivable that he scores around 20 points per game this year.

Illinois has high hopes and expectations for this season. In a close game, Dosunmu is a player they can count on down the stretch. If he can improve as a shooter, his upside as a scorer and Illinois’ ceiling are limitless.