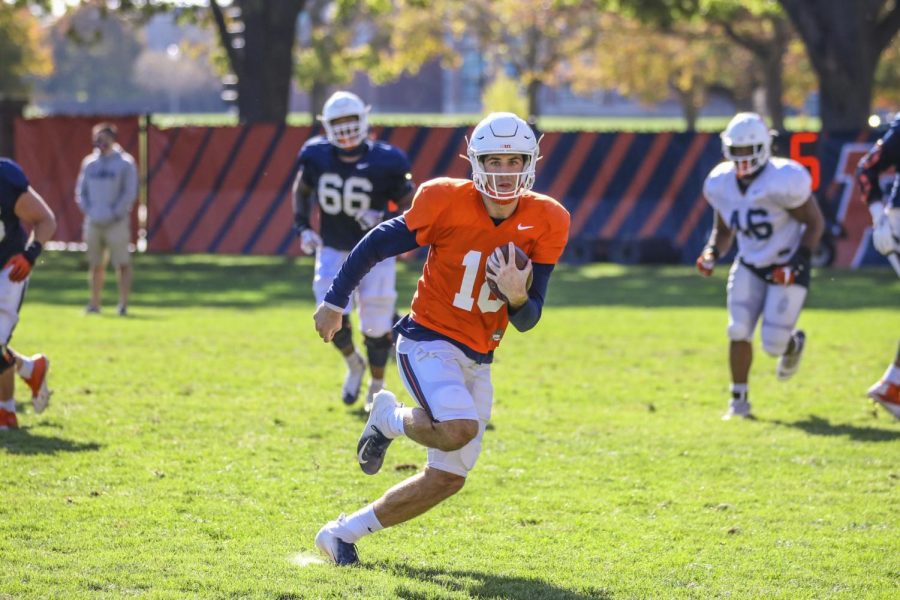 Brandon Peters came to Illinois only a month before he played his first game with a new team and system. The Michigan transfer lived alone, wasn’t familiar with his teammates and had less time to prepare than anyone.

Over a year later, things have changed for the quarterback. A rock-solid junior season, though hit with multiple injuries, and a productive offseason has benefitted Peters and has him more prepared for another year with the Illini in a system he feels comfortable with.

“Having a year under your belt, you feel more comfortable,” Peters said. “We’ve added some new stuff, we’ve taken some stuff out, so I mean there’s always some moving parts and some changing parts, but for the most part it’s the same.”

Peters missed three of Illinois’ 13 games last season due to two different injuries but was still productive when healthy. 1,884 yards and 18 touchdowns through the air along with 213 yards and three touchdowns on the ground proved he has a range of skills, but the consistency wasn’t always there.

“The biggest (goal) coach Rod wants me to work on is the completion percentage. It was kind of low last year. I think if I get that up it’ll be easier for us to move the chains a little bit,” Peters said.

Another area of improvement for the quarterback was to get in better physical shape. Peters was considered to be on the thinner side last year, which he soon realized wasn’t ideal for a Big Ten quarterback.

In addition to changing his diet by cooking for himself and eating the right foods to gain weight, he also tried to hit on every area of improvement to get himself in the best shape and size he could for his senior season.

“I think my lowest body weight last year was 212, 211, so I was pretty skinny. Which I mean, that’s not great when you’re playing in the Big Ten,” Peters said. “When (COVID-19) happened, I think this was a great opportunity for me to seek out some guidance on improving my body, getting my body ready for the season… I worked on mobility, strength and speed, so we really hit it all. But my big goal … was to be at 230 to start the season.”

In addition to constant work with his teammates over the offseason, Peters became the second Illini to work with a well-known pro in order to improve his game for next season.

Peters was set up to work with Hall-of-Fame quarterback Kurt Warner in Arizona for multiple workouts this offseason. Peters said his sessions with Warner helped him with different aspects of the game and said his time with him was well spent.

“He was just giving me tips, pointers, telling me things to work on for footwork, accuracy, ya know the mental part of the game,” Peters said. “He’s a Hall of Famer, he’s won a super bowl … he had a lot of great knowledge for me.”

The Illini have added new names to their receiver core via the transfer portal, including Luke Ford, Daniel Imatorbhebhe and Khmari Thompson for the upcoming season. They join Josh Imatorbhebhe, Casey Washington, Donny Navarro and others as targets for Peters to throw to. He says there are a number of “guys we can use to our advantage” in the offense for 2020.

Washington, a sophomore, says he’s noticed changes in his quarterback’s game so far this offseason. He says Peters looks more comfortable with the team, has added consistency and makes the other receivers feel comfortable on the field.

“If anything, I think he’s just more locked in this year, just because he’s comfortable with what’s going on. He knows what’s going on, he knows who he’s throwing to,” Washington said. “As a receiver, it kinda calms you down to know that your quarterback’s out there, he’s in the heat of the fire and he’s not really going through the ups and downs. He’s kinda always consistent and you know what you’re gonna get from him.”

Jim Nagy, the executive director of the Reese’s Senior Bowl, named Brandon Peters as his Big Ten quarterback that benefits most from playing this fall. With his offseason improvements and key additions to throw to, Peters will be pushing to raise his draft stock this season. He is also aware of the extra year of eligibility that he could possibly use, but he hasn’t thought about anything beyond this season.

For now, Peters says he’s “focused on this year. When the decision comes, it’ll come.”

The Illini open their season on Oct. 24 at Wisconsin where Peters will get to showcase his improvements for the first time this year. He says he’s excited to finally start the season and is going to do everything he can to make the most of it.