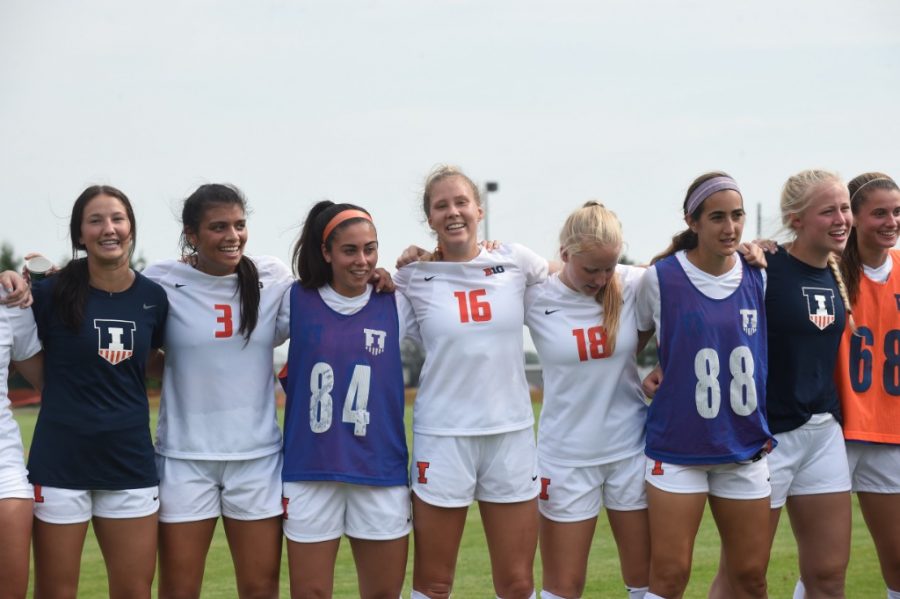 The Illinois soccer team stands together in a line during the opening of the Demirjian Park on Sept. 15, 2019. The team’s usual fall season was postponed to spring 2021.

With the decision to move the  season to spring, the team has been given an opportunity to fine-tune its players. For freshmen, they are given more time to get used to the team and the tempo of college soccer.

Rayfield knows that making connections is hard given the pandemic and social distancing guidelines, but she says the upperclassmen have been using soccer to integrate the freshman into the team.

“When we’re at training, when we’re at practice, I think we’re all cognizant of making sure that the freshmen are all integrated into different groups, that they’re hearing from different people,” Rayfield said.

One thing that really helps integrate the freshmen is the upperclassmen who play the same positions as them.

“I think a great example is our two senior goalkeepers and our two freshmen goalkeepers,” Rayfield said. “The seniors have really taught them expectations, taught them kind of how we do things the Illini way, what does it look like when we’re training, what does warm-up look like, all those different things. Not just what we do, how we do them.”

However, bonding isn’t just done at practice. While there are many limitations to bond in a non-athletic setting, the upperclassmen are finding ways to work around it.

This year, the freshmen are living at Illini Tower, and right by is an apartment complex where mainly the sophomores and juniors are staying. With a short distance between them, the freshmen are able to connect with upperclassmen easily.

“They have done a really good job of texting us and telling us to come over just to talk or kind of get those ice breakers out of the way that they can’t do on the field,” said freshman midfielder Kennedy Berschel. “So they’re conveniently located around the corner, and they just reach out to us to come over and kind of become friends off the field.”

With the soccer season kicking off in February, there’s still plenty of time to prepare and form team chemistry. For the class of 2024, Rayfield said to expect a lot from them.

“Expectations for this class are very high, as they are with all our classes, but I think the level that this group comes in with, the level of focus they have already shown in terms of investing in their development,” Rayfield said. “It’s a group that has shown that they’re here and ready to work and ready to take this program and help it become and stay consistently a nationally competitive program.”

Three months into being at Illinois, the freshmen are slowly but surely adapting to being at a Big Ten school and team.

For Berschel, time management was one of the hardest things she had to adjust to when coming to Illinois.

“We have practice every day on top of classes and now because the fall is our off-season the hours are quite heavy,” Berschel said.

As a mechanical engineering major, Berschel already has a heavy course load in her first semester. She has been using many resources like other players on the team as some of them are also engineering majors.

“I’ve talked to Aleah (Treiterer) a bunch, she is a sophomore on the team,” Berschel said. “She has helped me go through my schedule and has offered help if needed. Also, Janet is there and Shari (Clapp), our academic adviser, has been really supportive throughout everything with our weekly meetings and is always there to check in.”

Without a fall season, practice helps fill in the gap and Friday Night Lights Scrimmages brings a sense of competition.

“Since it’s another goalkeeper trying to score on you, you know what their weaknesses are in practice and you try and aim for them,” Cili said. “It’s basically going for each other’s throats nonstop until somebody gets three goals.”

With a game like that, everybody on the sidelines is watching and picking a keeper to win as well as creating banter.

“It’s always high stakes, people are always yelling just trying to come out on top,” Cili said. “I feel like that energy is unmatched with any other group (on the team).”

For Berschel, she looks forward to the competitive environment at practice.

“Everybody wants to get better all the time, both on an individual level and a team level,” Berschel said. “Right now we’re working on trying to figure out our team dynamic with formation because we lost the great players who just graduated. So trying to fill those gaps and create a new dynamic going forward everyone is really pushing to make the best we can.”

Along with practice, the team also plays in a intersquad exhibition match every two weeks starting in the middle of August called Friday Night Lights.

According to Rayfield, it’s fun comparing videos from Friday Night Lights to games from the regular season and noticing the intensity and speed are the same.

“All of our players are getting to play 90 minutes of that kind of intensity and that kind of pace,” Rayfield said. “That outcome matters to them, it’s a competitive situation and rarely in our normal run of things do we get to have that many opportunities to play that many minutes.”

Although Berschel is out with an ACL injury on her right leg, she still observes from the sidelines.

“It is a completely different experience than observing at practice,” Berschel said. “Everybody is out there treating it as if it were a real Big Ten game, which is kind of really exciting for me to experience.”

As for Cili, her Friday Night Lights experience was completely different because she was super anxious about making a good impression on her teammates.