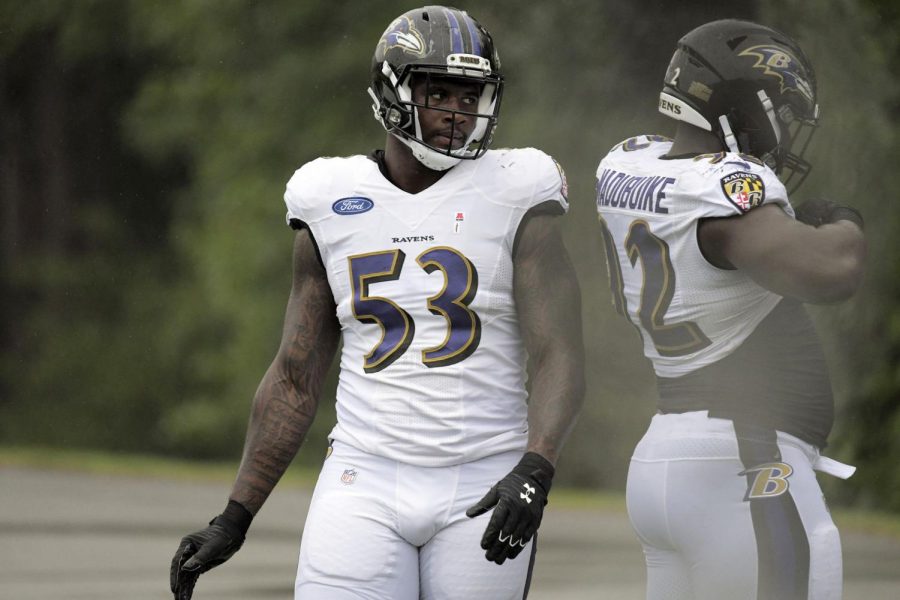 Baltimore Ravens defensive end Jihad Ward walks behind defensive tackle Justin Madubuike on Aug. 19. Ward is an Illinois alum who started playing for the Ravens in 2019.

On Oct. 23, Lovie Smith is expected to field his most talented team since he took over the head coaching position in 2016. While Illinois did not see any players taken in the 2020 NFL draft, 10 former players are currently on professional rosters, though this list is expected to increase next year. Let’s take a look at how these former Illini have fared over the last few weeks.

After seeing only one offensive snap across the first two weeks of the season, Allegretti saw three more snaps on offense over the last three weeks, all of which came in the Chiefs’ Week 3 win over the Baltimore Ravens. Allegretti didn’t get any snaps on the offensive side of the ball in Weeks 4 or 5, though he did see snaps on special teams. The defending Super Bowl champions are 4-1 through five weeks of play and sit atop the AFC West. Kansas City will take on the Buffalo Bills in Week 6.

Sitting out the first three weeks of the season, Fejedelem made his Dolphins debut in a 31-23 loss to the Seattle Seahawks, making a solo tackle on special teams in his first game of the year. The fifth-year veteran also had his third career carry in the team’s unexpected Week 5 win over the San Francisco 49ers, picking up one yard after receiving a direct snap on a successful fake punt. Fejedelem has yet to see a snap on defense this season.

Through five weeks of action, Hardee has only seen time with the special teams unit. Hardee made two tackles in the Saints’ Week 3 loss against the Green Bay Packers, though he came out injured against the Lions in the fourth week of play. Hardee sat out injured for the team’s Week 5 overtime win over the Los Angeles Chargers, and it is unclear how severe his injury is.

Karras is the Dolphins’ starting center, and he has been on the field for all 336 of the team’s offensive snaps in 2020. He also sees a bit of time with special teams, but he features primarily on the offensive side of the ball. The Dolphins have improved over the past three weeks, going 2-1 over that period, highlighted by a dominant 43-17 victory over the 49ers in Week 5.

After getting off to a slow start, at least to his standards, Mercilus has significantly improved over the last three weeks. His most productive game came in the Texans’ Week 3 loss to the Pittsburgh Steelers, as he racked up five total tackles, including one for a loss. Mercilus accumulated four tackles in Week 4 before recovering a fumble in the team’s first win of the season against the Jacksonville Jaguars in Week 5. The Texans currently sit tied for last place in the AFC South.

After being named to a 53-man roster for the first time in his career for the team’s Week 1 win over the New York Jets, Phillips has yet to see any playing time since opening weekend. It is unclear what Phillips’ role with the team will be going forward, though the Bills are 4-1 through five weeks of competition.

The last two weeks of competition have been rather productive for Smoot, as he made three total tackles in the Jaguars’ Week 4 loss to the Indianapolis Colts and two total tackles in Week 5 against the Texans. Smoot also picked up his first sack against Houston, a game in which he racked up three quarterback hits.

Turner earned his first two snaps on offense in the team’s 49-38 loss at the hands of the  Cleveland Browns, though he sees much more time with the special teams unit. After the Cowboys beat the New York Giants in Week 5, the team faces the Arizona Cardinals in Week 6, though it is unclear what Turner’s role on offense will be going forward.

Ward has seen relatively consistent playing time on defense, playing between 40% and 55% of the team’s defensive snaps each game. Though his most productive game came in the team’s opening weekend victory against the Browns, Ward made two tackles in Week 3 and one quarterback hit in Week 5.

Wilson sees time on both defense and special teams, as he has only seen defensive snaps in three games this year. After making four tackles in the team’s Week 3 victory over the Jets, including two for a loss of yardage, Wilson was only on the field for 12% of defensive snaps in Week 5.