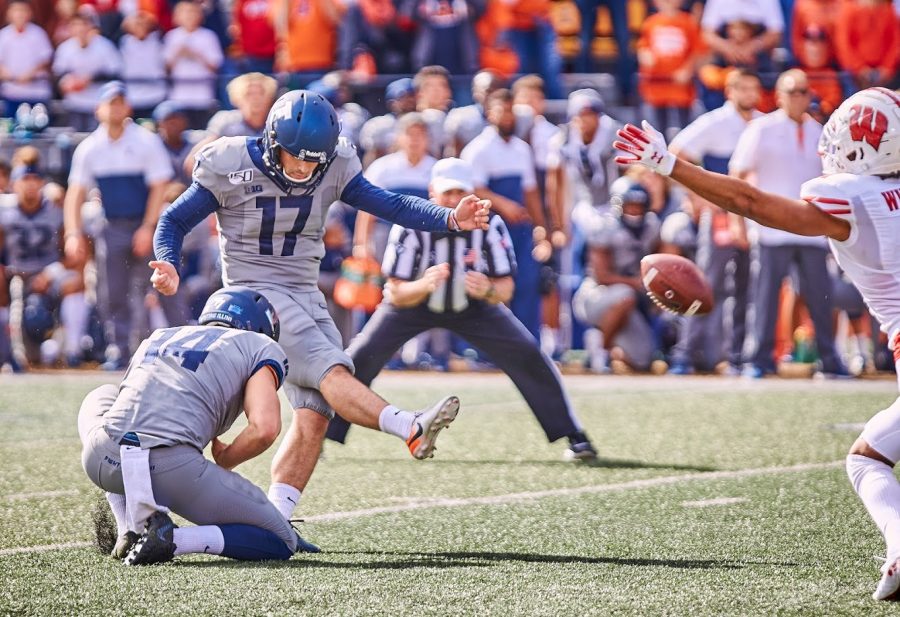 Illinois senior kicker James McCourt kicks the game winning field goal during the game against Wisconsin on Oct. 19 at Memorial Stadium. Since then, McCourt has been practicing to ensure he has the consistency he wants as a Big Ten kicker.

On Oct. 19, then-junior James McCourt ran onto the field, about to attempt the biggest kick of his college career. The Illini, down 23-21 against the No. 6 team in the country, had three seconds left on the clock to pull ahead and win the game. McCourt lined up for a 39-yard field goal to try and lift his team over Wisconsin and complete the upset of the year. He kicked the ball straight through the uprights and was immediately swarmed by his teammates in celebration.

That kick was a season-changing moment for the Illini and a moment McCourt will never forget. Amongst the celebration, though, McCourt laid on the field unconscious for a few moments before getting hauled up by his teammates and lifted for everyone to cheer for.

“I turned to Griff (teammate Griffin Palmer) and he hit me in the head super hard I guess, and our face masks got stuck (together),” McCourt said, describing the moment after the kick went in. “Griff kinda got hit and I got hit, we went down together, it was pretty romantic I guess.

“I remember completely blacking out and seeing stars. The video of me getting lifted up I’m pretty pale, I don’t know where I am. I didn’t know where I was for a good two seconds.”

Despite briefly losing consciousness after making the kick that turned Illinois’ season around, McCourt says he still remembers the events following his kick. Some parts of him thought it wasn’t real, but as time went on, he realized he was living a dream.

“Right when I hit it I knew I made it,” McCourt said. “But I guess after the pile and after I got up, I kinda forgot the kick even happened. The first smile was, ‘this is a really cool dream,’ then I came back down and then was like, ‘Okay, this really happened,’ and kind of enjoyed it from there.”

McCourt’s game-winner to beat Wisconsin was a moment that both he and Illini fans will long cherish, but the kick has even more meaning for the senior almost a year after he first made it.

Over the offseason, a big part of the game he worked on was the mental side of making kicks. Kickers face some of the most pressure out of anyone on a team, and McCourt thinks back to the moment from last October to give him confidence when he’s about to kick again.

“Now looking back on it, trying to keep positive thoughts, positive affirmations and stuff like that is just super important for a specialist, and it’s just a moment in time that I felt my best,” McCourt said. “I felt super confident out there and try and replicate that feeling with every kick.”

The main aspect of his game he worked on over the offseason, however, was his consistency. Along with the kick against Wisconsin, McCourt had other impressive kicks, including a 57-yard field goal against Eastern Michigan, which tied the school record.

But his kicks didn’t always end in celebration.

McCourt attempted 19 field goals in 2019 and only made 13 of them. He was solid inside 40 yards, making six of eight attempts, as well as above 50 yards, making four of five. But between 40 and 50, he was only able to make three of his six attempts.

“I think it’s pretty obvious where I need to improve, it’s the consistency that you need from a Big Ten kicker,” McCourt said. “Those ‘chip shots’ that I missed definitely are kicks that I want back and I think now, something this offseason that I’ve really focused on (is) inside 45 yards is the place I want to see my most improvement.

“I’ve seen the results in practice and I really can’t wait to get out to the game and prove to myself, prove to other people that my consistency is there.”

One part of the game that will be different for everybody this year is playing with no fans. Although everybody will experience it, kickers come out in some of the highest-pressure times in the game where fans are the loudest.

McCourt, however, expects to adjust quickly. He said he has talked to professional kickers about playing with no fans, and he compares the situation to how he kicks in practice.

“I’ve heard from a lot of NFL guys that the no fans can be bizarre for some people, some people don’t really notice it that much,” McCourt said. “I think if you kind of go with the mindset of we’ve been practicing every day, when we kick there’s no fans there and you’re kicking to blank stands, so I mean it shouldn’t be too different. Maybe just a little bit of adjusting but I don’t really expect it to alter too many things.”

Following his senior season, McCourt will be one of the many Illini faced with a tough decision to make. The NCAA granted fall athletes an extra year of eligibility, leaving the kicker with a difficult decision.

McCourt was given the No. 11 kickoff grade in the nation by Pro Football Focus and has proven he can make kicks from long distance. If his consistency does improve, McCourt could enter discussions for an NFL spot.

On the other hand, the Illini are scheduled to begin their 2021 season in Ireland, McCourt’s home country. Although he isn’t ready to make a decision yet, McCourt acknowledges his excitement to potentially play in Ireland and what the opportunity means to him.

“Its obviously something I haven’t put too much focus on since we’re super locked in on this season, but you know if I get the opportunity to, you know, go back to my homeland and play it’s definitely gonna be something that I heavily consider,” McCourt said. “To have that opportunity to go back home and play in front of my family, it’s unbelievable. It would definitely be something surreal and would be amazing.”

Until a decision has to be made, McCourt and his team have a nine-game schedule to play with what’s expected to be the best Illini roster in the Lovie Smith-era so far. Illinois opens up the Big Ten season on Oct. 23 under the lights at Wisconsin, a rematch of last year’s biggest upset in college football and the game of McCourt’s famous kick.

“It’s awesome,” said McCourt on starting the season at Wisconsin. “The whole team is super bought in right now. I’m super excited to get up there and kick in that stadium … and everyone’s ready to get (going).”