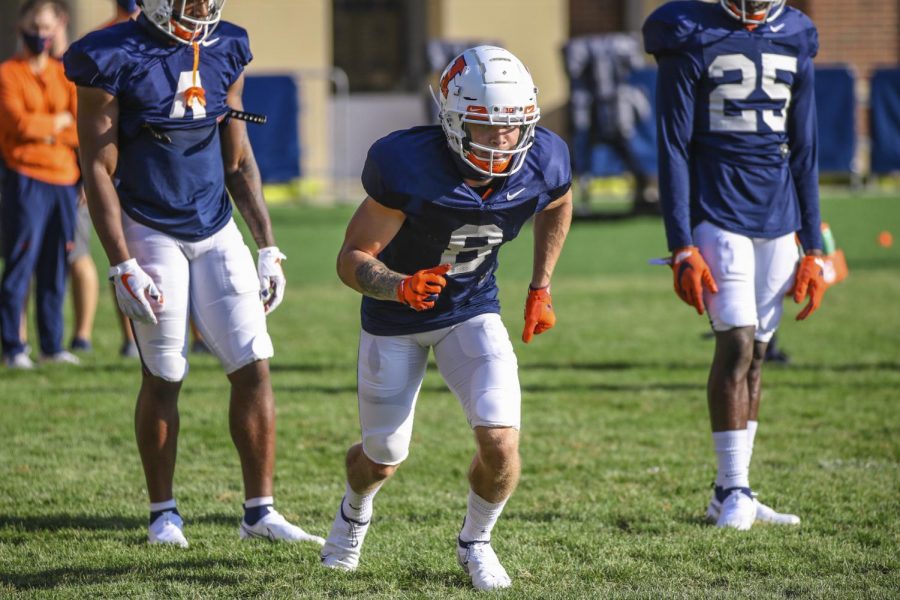 The story of how an unranked Illinois football team upset No. 6 Wisconsin last October has been written and retold countless times since then-junior James McCourt nailed the game-winning field goal as time expired. McCourt’s kick, defensive back Tony Adams’ interception and wide receivier Josh Imatorbhebhe’s touchdown, all which happened in the fourth quarter, were the center of attention.

One underrated, yet crucial, play of the game was then-freshman wide receiver Casey Washington’s diving 18-yard catch, which extended the fourth-quarter drive and set up Imatorbhebhe’s 29-yard touchdown, bringing the game within two points.

But, Washington’s catch was almost called back.

“I knew it was a catch,” said Washington when recalling the catch last Wednesday. “I had turf in my eyes. I deserved that catch. If they would have turned that around, I would have been a little hot. Good thing they called it a catch.”

Before the Wisconsin game, Washington had only caught one pass at the collegiate level, coming the week before against Michigan.

Now, with a full season under his belt, Washington’s confidence has grown past his physical abilities and into his understanding of the game.

“Coming from high school, you’re just kind of out there playing football,” Washington said. “You get the schemes, the coverages (in college), everything that hits you all at once. For me, it was a lot to take in. It was a great learning experience. I’m grateful I got to get on the field.”

Head coach Lovie Smith knows every freshman will experience mental and physical growing pains when they arrive at college.

Smith said that statement holds true with Washington. But the receiver had a special edge about him that was noticeable at their recruitment visit.

“We’re inside eating — had a barbecue going — and he’s outside catching the ball,” Smith said. “He’s a football junkie, so it didn’t surprise me he was able to get time as a freshman. Now, it’s taking that game to the next level. He knows more about what is required of him to be a real good Big Ten football receiver.”

Washington finished his freshman campaign with 11 catches for 132 yards with a season-high four catches against Northwestern. He played in 10 of Illinois’ 13 games and registered a catch in six of those.

While those are better statistics than most freshmen record, it wasn’t enough for Washington.

“I don’t feel like I’ve done anything yet,” Washington said.

To Washington, his sophomore season could be his time to break out, as he’s been able to spend less time on the mental aspect of the game and more time fine-tuning his skills. Over the summer, Illinois wide receivers coach Andrew Hayes-Stoker said Washington “better break out” this season.

It’s no secret Washington will have to compete even harder this season to earn snaps. Almost all of Peters’ other options are older and more experienced than Washington.

But Washington has embraced the added competition at practice, as depth at the position has pushed each player to work harder. The Texas native said the wide receiver room is different this season and for the better.

Part of his personal growth since the beginning of the 2019 season has been identifying his weaknesses. Spending a lot of time in the film room last season, Washington has improved on coverage recognition, learning defenders’ tendencies and slowing down the game to its simplest forms.

Now, consistency in applying what he has learned is Washington’s most notable goal.

“This year, consistency is a huge thing for me,” Washington said. “I just think, everyday, as long as I’m constantly getting better, that’s one of my bigger goals. You’ve got to prove yourself everyday and that’s part of consistency. So every play, every game, every snap, that I should be out there and just compete.”