Underwood, Illini are prepared for road ahead after long offseason 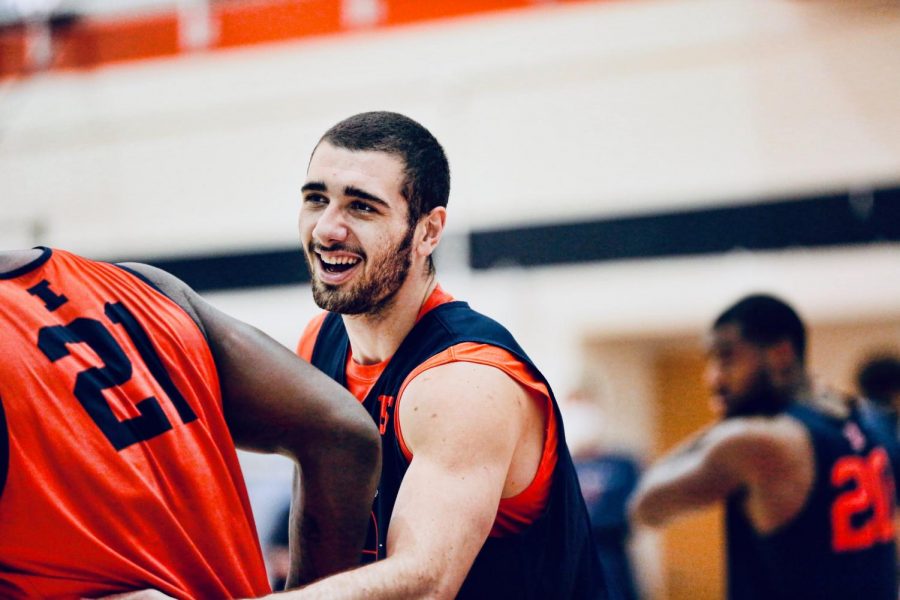 Junior Giorgi Bezhanishvili pats teammate Kofi Cockburn on the back during the first day of basketball practice on Wednesday.

It had been 216 days since head coach Brad Underwood and his players took the court for an official team practice. After an offseason and preseason that was anything but standard, Illinois participated in a team practice on Wednesday.

“There’s nothing like the start of practice,” Underwood said. “It makes the hair on the back of your neck stand up. It’s exciting. You like to bundle all of that enthusiasm up and spread it out through the course of the season. Our guys were excited and we’re bouncing off the walls ready to get after it.”

In the fall, the team was allowed to do individual workouts and some small group workouts. However, the NCAA limited the team to just 12 hours a week on the court. Instead of playing five days a week, Underwood said the team would take an off day every two days.

Another difference between this preseason and a normal one is the lack of team bonding events. The team did not have access to the locker room. As soon as one group finished, they could not go back to the locker room. Underwood also said he could not host team dinners, take the team bowling or to a movie.

Less time in the gym potentially could have been bad for the freshman. But Underwood says the group, led by Andre Curbelo, Adam Miller and Coleman Hawkins, is already up to speed.

“On the court, they’re probably further ahead than any group of freshmen have been,” Underwood said. “With the structure and the format of where we were at, they’ve been great listeners and great learners. We’ve been able to teach a lot in these small groups.”

The first year players aren’t the only ones who have impressed Underwood so far. After a disappointing second season, junior forward Giorgi Bezhanishvili has also taken a step forward in practice. Following a strong freshman campaign, Bezhanisvili’s stats were down across all notable categories after switching from center to power forward to accommodate Kofi Cockburn.

But after the first day of practice, Underwood had nothing but positives to say about the Rustavi, Georgia native.

“He’s worked his way back to gaining that (confidence) and understanding where his opportunities came,” Underwood said. “Giorgi is one of the most unselfish people we have on our team in terms of being able to share. He doesn’t care if he scores or doesn’t score. He just wants to win.”

It was not quite a full-team practice for the Illini on Wednesday, however. Junior transfer Austin Hutcherson has been dealing with some back problems and was held out of practice. He has another examination “coming up.” Redshirt freshman forward Benjamin Bosmans-Verdonk had a flair up on the same foot that kept him sidelined for most of last season and was also held out of practice. Sophomore center Jermaine Hamline also missed practice for a hand injury.

Injuries can be a factor in any season and in this upcoming season, COVID-19 positive tests could also lead to players missing time. Starting lineups could change on a nightly basis, so having depth and versatility will be key. And that is something Underwood is confident he has.

“We fully expect to have guys out,” Underwood said. “I hope it doesn’t happen. I hope we’re blessed and we stay away from that. But if it does happen, I think we’re in a nice spot.”