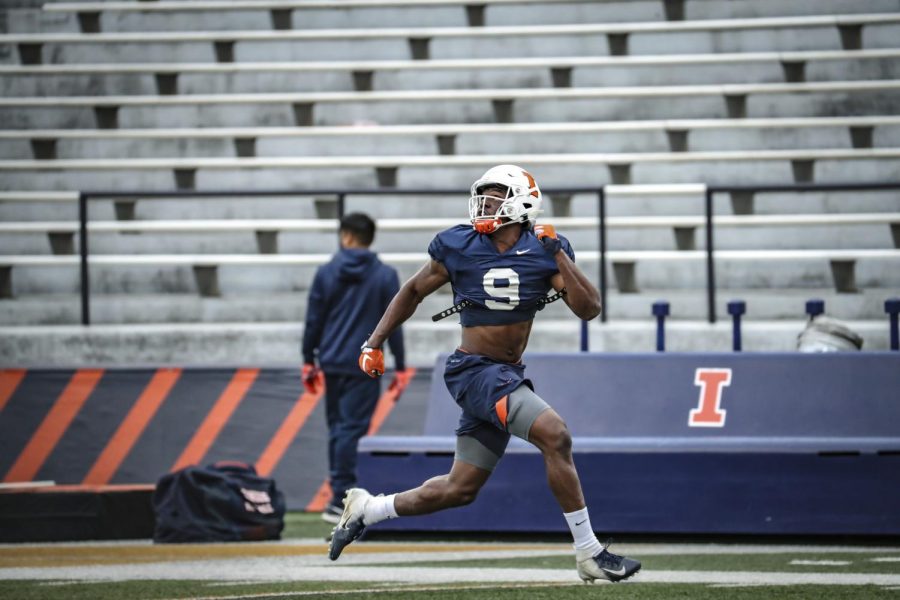 It’s been one year since senior wide receiver Josh Imatorbhebhe packed his bags and left the University of Southern California for Lovie Smith’s program. The results? Nine touchdown catches, two program-changing victories and the school’s first bowl game since 2014. While the Illini gear up for an encore, Imatorbhebhe welcomes a familiar face to the program: his brother.

After playing with his older brother for three seasons at USC, Imatorbhebhe reunites with his brother, senior tight end Daniel, as they look to carry the Illini to its best regular season in recent memory.

“It’s awesome (having my brother here),” Josh said. “It’s kind of like the last go-around for both of us. Things didn’t really work out at USC for me or him really after he got injured. I feel like it’s an amazing end to our college stories.”

The Imatorbhebhe brothers have showcased potential despite constant setbacks. For Daniel, Illinois is his third team, as he was a member of the Florida Gators and USC Trojans. Daniel actually had a productive stint under Sam Darnold’s offense, being named an All-Pac 12 honorable mention after his freshman season. However, injuries set back the older brother.

“This is a guy who stretches the field vertically and has an incredible range of motion,” Josh said of his older brother. “You throw it wherever he is, especially in the middle of the field, he’s going to catch the ball. He has tremendous body control, soft hands, great awareness. After getting his confidence back, it’s only up.”

Lovie Smith and his offensive coordinator, Rod Smith, have a stockpile at the tight end position with the return of junior Daniel Barker while adding Daniel Imatorbhebhe and Georgia transfer Luke Ford. While all three can’t play at once, it’s possible the staff decides to go with two tight end sets, eliminating a spot for a wide receiver.

“Having two tight ends indirectly benefits us because it increases competition (for wide receivers),” Josh Imatorbhebhe said. “Since the tight ends are more talented, (wide receivers) are going to have to step up their game if they want to see the field.”

While Illinois might have a problem deciding who that second wide receiver will be, there’s no doubt Josh has cemented his place as Brandon Peters’ top target. The Georgia native shattered expectations last season with 634 yards and nine touchdowns. Against Michigan State alone, Josh finished with 179 yards and two touchdown passes, bringing his team back into the game.

Josh, who missed the last two games due to injury, appears to be healthy and ready for an encore. Along with his return is also heightened expectations from pundits and teammates.

“Stepping into a leadership role isn’t something I want to take lightly,” Josh Imatorbhebhe said. “The guys usually follow what I have to say. Last year, I definitely helped our team win some games. It’s something I’m embracing more and more.”

In what could be his final season in the orange and blue uniform, Josh’s stay in Champaign has been football-focused. Moving from sunny Los Angeles to Champaign is definitely a change, but he has found a few spots where he can relax.

“I’ve gotten used to (Champaign), but I don’t go out and do many things,” Imatorbhebhe said. “I come to the Smith Center, go work out, go to practice and go back home for the most part. There are some places I like to go and eat. I love Merry Ann’s, (and) I love Culver’s.”

While Josh was brand new last year, the wide receiver has settled in while bringing his big brother down to Champaign with him. The two, who are best friends, work out and hang out together, just like during their childhood. Josh, who looks up to his brother, attributes a lot of his success to Daniel’s presence.

“Everything he did, I wanted to do a little better,” Josh said. “If I didn’t have him as an example, I wouldn’t have the kind of drive to be the best.

“When I was getting recruited by Boston College as a sophomore, I was stuttering on the phone, and I was nervous. Then I would see him talk to Florida, and he was so calm and mellow. I was like, ‘Wow, I want to have that.’”

This year will be the most unique season in Big Ten history, with only a nine-game conference season. Josh could be a productive senior season away from securing a spot on Sundays with an NFL roster. But what if the season turns haywire? Could the Imatorbhebhe brothers return for their fifth and seventh year, respectively, if the NCAA allows it?

“It definitely depends on how the season turns out,” Josh said. “I don’t have a crystal ball (to see) into the future. We’re going to let the chips fall where they may and see what the best decision would be.”