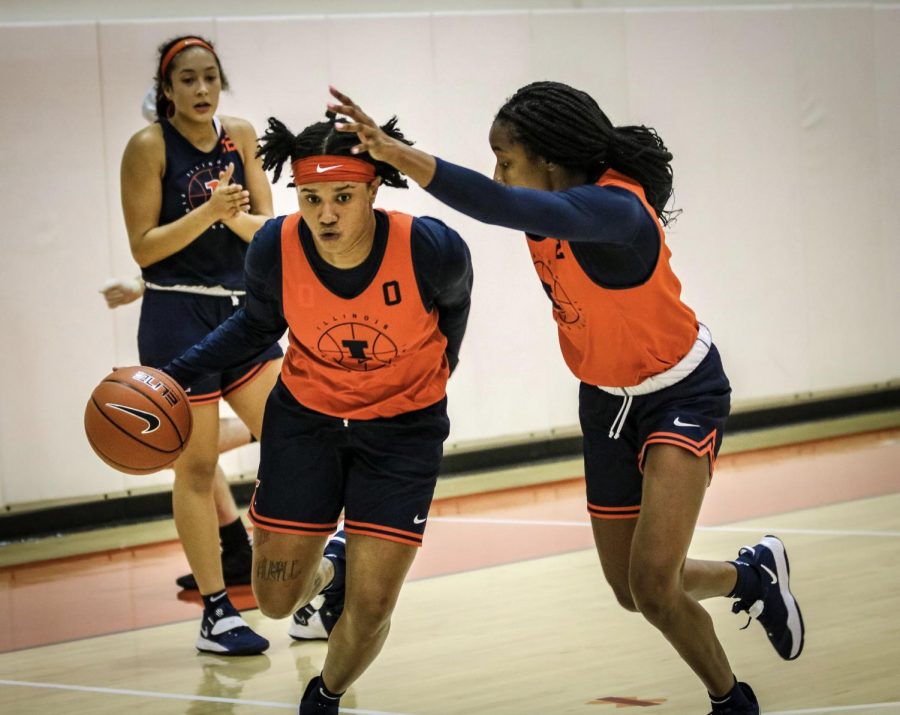 The Illinois women’s basketball team had its first day of official practice on Wednesday. Just one day in, head coach Nancy Fahey can already tell that her team will be quite different than the Illini team from a season ago.  After struggling with size in 2019, the Illini looked primed to fare better inside.

“Last season, every time I walked out except for the very early part of the games I had three 5-players walking out in street clothes,” Fahey said. “Basically, in the Big Ten, I had to move a three to play a four-spot and played undersized.  This year we (are 6-foot-5-inches, 6-foot-3-inches, 6-foot-2-inches, 6-foot-4-inches). We have depth in that position, we can play inside and out, the balance just changes the game.”

Fahey compared the impact men’s basketball sophomore center Kofi Cockburn did for Brad Underwood’s team last year to what she envisions redshirt-junior transfer Eva Rubin to do for the women’s team. The men’s team struggled to defend inside and rebound, but once Cockburn came in, the Illini excelled inside.

A season ago, the Illini used zone heavily on defense to combat size issues. This year it looks as though the Illini will go with more man-to-man defense and less “scheming” on that end of the court.

Although the Illini struggled last year, the team gave underclassmen the chance to play valuable minutes. As the development of underclassman continues, Fahey believes success will follow.

“We had three freshmen play a lot of minutes and that’s hard in the Big Ten, but guess what, they’re sophomores now. They have that experience now,” Fahey said, “They’re all enjoying the pace they’re playing (at), and it’s not always fast because you have to be efficient. Everyone gets a year older and that experience is just a different look on the team.”

Despite the lack of experience with this team, there doesn’t seem to be much concern about leadership. Fahey anticipates roles developing naturally over time, but Fahey said junior guard J-Naya Ephraim has stepped up as leader so far.

The Illini lost some of their best shooters from a season ago. Petra Holešínská and Ali Andrews made the most threes last season and both departed this season. Although Fahey isn’t looking to replicate those shooters, she feels confident about the team’s ability to shoot from the outside.

“Jada Peebles is coming off of a lot of minutes as a freshman. Her confidence is so much different, and she’s looking to score with that aggressiveness. I also think Aaliyah Nye, our freshman,  has been really looking for her game and her shot,” Fahey said. “We brought in Vernette Skeete, a great skill development coach from Marquette who has made our kids really buy in all summer long to improve as an individual.”

Despite the season being about six weeks out, the schedule has yet to be released. Fahey anticipates the non-conference schedule will mostly feature local teams, so they can come in early and get tested the day before a game as a safety precaution.