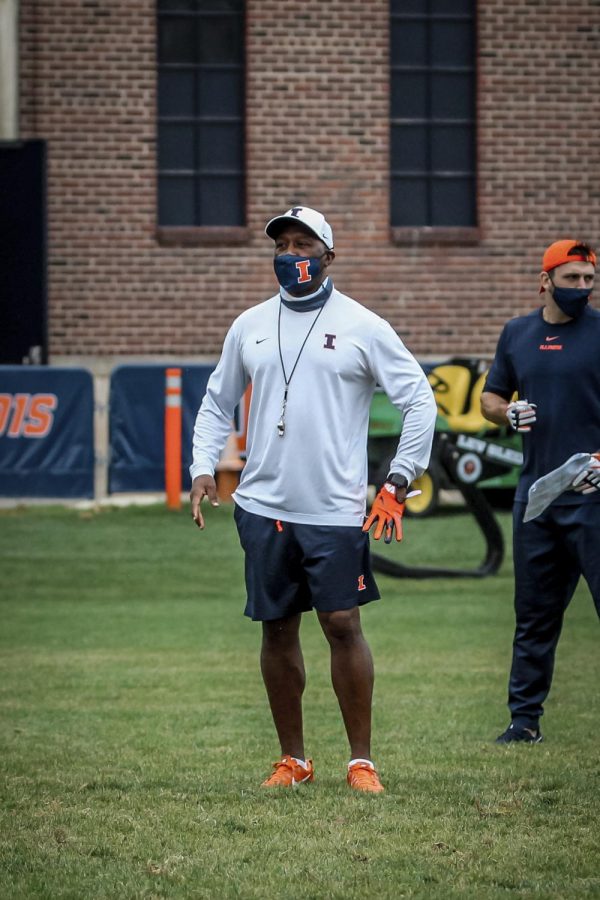 Illinois head coach Lovie Smith instructs during practice on Oct. 12. The season kicks off on Friday against Wisconsin in Madison.

Despite what is considered to be the best team of the Lovie Smith era so far in Champaign, the Illini are not projected to perform well in the Big Ten in this weird nine-game season.

247Sports projects Illinois to finish last in the Big Ten West, and most analysts have Illinois finishing at 1-7 or 2-6 before the ninth game of the year. It’s hard for faithful Illini to agree with that, however, after a Redbox Bowl berth while having an offense that adds new skilled pieces to an already-talented group.

Illinois has the two projected division winners on its schedule — Wisconsin and Ohio State — and also has bottom-level projected teams in Rutgers and Purdue. Here are the least and most difficult games for the Illini this season, ranked from easiest to hardest.

Last year at Memorial Stadium, the Illini defeated the Scarlett Knights 38-10 in a game where the defense forced three turnovers. Rutgers brings back coach Greg Schiano, but he hasn’t added any key pieces that could boost the team to another level. Rutgers has struggled mightily since joining the Big Ten and is projected by nearly every expert to finish last in the Big Ten East. Some analysts think this could be Illinois’ only win, and the Illini should be able to take care of business in Piscataway.

The Illini went into West Lafayette on a miserable, rainy day last year and handled the Boilermakers, winning 24-6. After initially opting out of the 2020 season, Purdue star wide receiver Rondale Moore is back and ready to fly by Big Ten defenses. Despite Moore’s return, the Boilermakers are projected to finish sixth by 247Sports in the Big Ten West with a number of questions regarding the defense and no surefire first-string quarterback. The Illini should look at this as a favorable matchup when they play their first home game of the year.

In what was the most disappointing Illini game of the year last season, on a cold, rainy senior day, Northwestern defeated Illinois 29-10 at Memorial Stadium. But despite the Wildcats’ win over the Illini, they finished last in the Big Ten West. The Wildcats return 18 of 22 starters from last season and have added new additions to the coaching staff. This year they are projected by 247Sports to finish fifth in the Big Ten West. The Wildcats are hoping that Indiana transfer quarterback Peyton Ramsey will be able to boost what was the Big Ten’s worst offense in 2019.

Head coach Scott Frost and his team have not found the success they’re looking for since Frost was hired for the 2018 season. Quarterback Adrian Martinez, a skilled player on the ground and in the air, leads the offense that lost six receivers after 2019 either due to graduation or the transfer portal. However, the Cornhuskers are still projected to finish fourth in the Big Ten West due to a hopeful offense with Martinez. The Illini had a 35-21 second-half lead over the Cornhuskers under the lights at Memorial Stadium last season before blowing the lead and losing 42-38, a game where Martinez threw for 328 yards and three touchdowns and rushed for 118 yards. The Illini are seeking revenge in Lincoln this season and could come out with a victory with their improvements on both sides of the ball.

The “eight-game plus one” schedule will have the Illini playing the team in the Big Ten East that finished in the same spot in the standings as they did, so the opponent is far from determined right now. But, this could be the competition gap in Illinois’ schedule. The four games before this on the list seem much more realistic for the Illini to win than even the next team listed, so the “plus one” game should be a good test to see how the Illini have developed by the end of the year.

The Hawkeyes are projected by 247Sports to finish third in the Big Ten West this year. But after losing just 19-10 in Iowa City last year, this could be a chance for the Illini to prove themselves against a top-dog in the conference. The Hawkeyes will be without quarterback Nate Stanley after what feels like a decade of him running the Iowa offense, and they will also lose three defensive linemen, including first-round draft pick AJ Epenesa. Despite the losses on both sides of the ball, Kirk Ferentz is a proven head coach that will keep the Hawkeyes competitive in the league. The Illini, however, will be seeking a late-season upset in potentially their last home game of the season.

The Golden Gophers broke out last year. Head coach P.J. Fleck and the team got out to a 9-0 start last season before finishing the season at 11-2 after an impressive win over the Auburn Tigers in the Outback Bowl. Quarterback Tanner Morgan returns as one of, if not the most, accurate thrower in the Big Ten, and the defense stays strong despite losing star defensive back Antoine Winfield Jr. to the NFL. The Golden Gophers do, however, lose their two best receivers from 2019. The Illini were handled against the Golden Gophers last season, losing 40-17 in Minneapolis, but an improved offense and defense should make this year’s game a lot closer.

The Badgers are projected by most analysts to land a spot in the Big Ten Championship game and win the Big Ten West this season, despite losing star rusher Jonathan Taylor to the NFL. Everyone remembers the upset of the college football season last year when the Illini took down the No. 6 Badgers 24-23 after McCourt’s walk off field goal. But Wisconsin is looking for its revenge to start the 2020 season. Redshirt freshman Graham Mertz will start the season for the Badgers as quarterback while senior Jack Coan is out with an injury, but the Badgers boast one of the best defenses in the conference and have possibly the best defensive line in the Big Ten. So, the Illini will need more magic than they did on Homecoming last year to leave Madison with a win.

This game will undoubtedly be the toughest for the Illini this year. The Buckeyes bring back Heisman-hopeful quarterback Justin Fields after falling to the Clemson Tigers in the semifinal of the College Football Playoff last season. The reigning Big Ten champions lost star defensive lineman Chase Young and defensive back Jeff Okudah, who were taken with the second and third picks in the 2020 NFL draft, and lost nine players total on defense. The Buckeyes also lost star rusher J.K. Dobbins to the NFL, but they boast many highly-rated recruits to try and replace them. Ohio State is nearly every analysts’ pick to win the Big Ten, and the Illini will need to play like it’s 2007 to upset one of the best teams in the country.