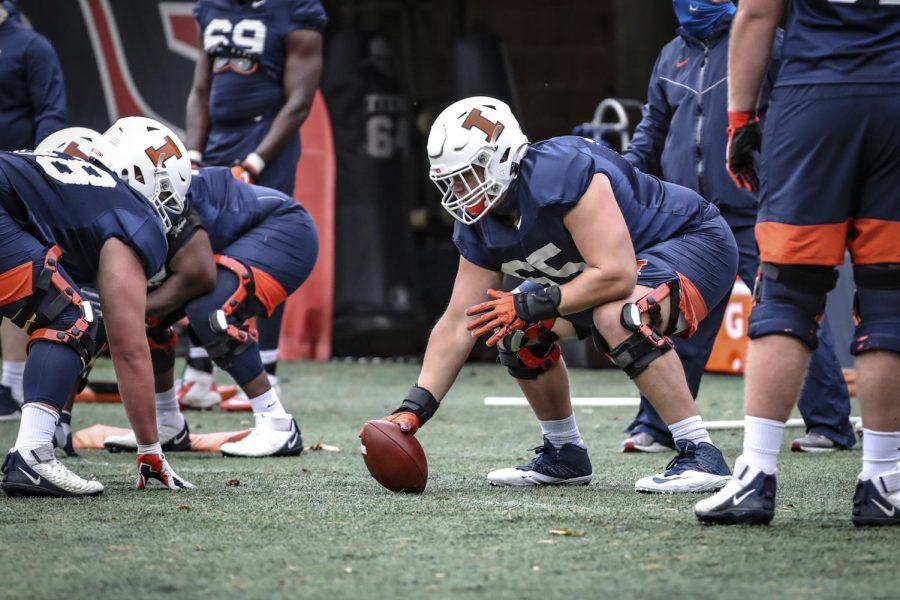 Senior offensive lineman Doug Kramer prepares to snap the ball during practice on Oct. 15. The Illini will face the Badgers on Friday at Camp Randall Stadium in Madison, Wisconsin.

Senior quarterback Brandon Peters and his plethora of receiving weapons have garnered the preseason hype of the Illinois fandom. While senior wide receivers Josh Imatorbhebhe and Trevon Sidney and junior tight end Luke Ford will likely bring an exciting flair to the offense, their success won’t happen without one group — the offensive line.

The core four linemen have built chemistry on and off the field, as they’ve been by each others’ side since freshman year. But the line, ranked the best in the Big Ten by Pro Football Focus, hasn’t always been the Illini’s strength.

“We’ve just seen each other grow up over these past three years,” Palczewski said. “And we’ve grown up from that terrible season in 2017 where we went 2-10 and knowing, just working every single day towards this goal. And just knowing how we work. Just being able to trust each other and knowing this whole team starts with us.

“If we win, this entire team wins, and we understand that.”

The gritty culture of the offensive line, however, wasn’t established by any of the current veterans. Former Illini and current NFL players like Nick Allegretti, Christian DiLauro and even Ted Karras served as the line’s trailblazers.

While DiLauro is currently a free agent, Karras is the Miami Dolphins starting center and Allegretti is the Kansas City Chiefs’ backup guard.

However, Allegretti earned national attention in the Chiefs’ Monday night matchup against the Buffalo Bills after taking 89% of the offensive snaps. To Kramer and Palczewski, close friends and former teammates of Allegretti, hearing the praise for him on Monday was impactful.

“Obviously it’s awesome to see someone you look up to like that and someone you’ve played with for years reach that final goal,” Kramer said. “And obviously, there’s still a lot to go for him, but it was awesome seeing him in the game and getting the shoutouts he definitely deserves because he works super hard.”

As seniors, both likely to get drafted in 2021, Palczewski and Kramer will be the next to pass the torch to the younger linemen. A future offensive line leader may have already been decided, as Smith announced the new starting right guard on Monday.

With the graduation of Richie Petitbon, Smith brought in transfer senior Blake Jeresaty to potentially fill that role. But, Jeresaty ended up having shoulder surgery, keeping him out for the 2020 season.

“Verdis (Brown) is a great offensive lineman,” Kramer said. “He has all the tools to be successful. He’s a big, strong kid. I’m really looking forward to see what he can add to the group, and I think we’ve already seen some things in both the run and the pass game.”

Brown, a former four-star recruit, played in all 13 games last season as a backup. While Brown doesn’t have the same starter experience as the other four linemen, he shares something equally as important in common: He’s an Illinois native.

“It’s awesome,” Palczewski said. “I always say the best offensive linemen come from the midwest and especially when it shows that this school really cares about our in-state ties. We’ve got guys from Rockford, Peoria, Hinsdale, Chicago, Mount Prospect, all anchoring your starting five. That’s where your offense starts. That’s where the team starts.

“You recognize this team. We’re not dudes from everywhere else. You know our starting five are from Illinois. That just means a lot to me to know we’re homegrown.”

With an established, tight-knit group, the Illini offensive line is prepped to bring in national attention of its own in 2020.

However, becoming the Big Ten’s best returning line didn’t happen overnight or even after one season. But each of the veterans saw the potential since freshman year and are excited to showcase their talents this season.

“Nobody else did that, but by coming in every single day and getting better and playing hard, we’ve been able to do that and make ourselves one of the best lines in the nation.”