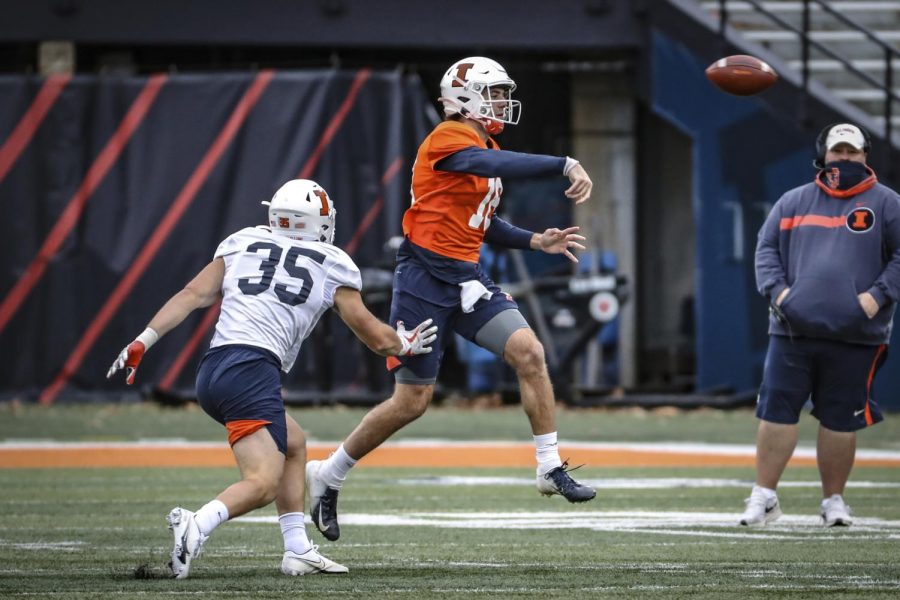 The Illini open up their 2020 season Friday night in Madison, Wisconsin to take on the Wisconsin Badgers at 7 p.m. CST.

Friday night’s game will be a rematch of college football’s biggest upset of 2019, a game in which the 31-point underdog Illini defeated the No. 6 ranked Badgers on a go-ahead field goal as time expired at Memorial Stadium.

“We’re going to get their best punch,” Illinois senior defensive end Owen Carney said. “It’s going to mean a lot to them as much as it does to us and their program. People will say we pulled off a fluke, it was an upset. But … we’re looking to do the same thing again and really prove that it wasn’t a fluke, that we are a good, solid team.”

Illinois is coming off its first bowl-game appearance since 2014 after falling to the University of California-Berkeley in the Redbox Bowl and have added key pieces to their offense through the transfer portal.

Wisconsin is the defending Big Ten West champions and returns most of what was a loaded defense in 2019. Questions loom on offense, but the Badgers plan on disrupting opposing offenses all season long.

The Badgers were initially 23.5-point favorites over the Illini, a spread that has surprised many Illinois followers. However, earlier this week, the spread was updated to Wisconsin -19.5.

With the Illini having knocked off the Badgers last season and adding pieces to their offense, an over three-touchdown spread wasn’t expected. However, Illini quarterback and senior-captain Brandon Peters said the spread doesn’t bother his team and uses it as motivation for the game.

“When you see that, you’re like, ‘Wow, after what happened last year?’… I guess we’re going to have to just go and prove them wrong again,” Peters said.

Wisconsin will be no easy task with its defense that the Illini will face on Friday. Despite losing their two best defenders to the NFL, the Badgers have one of the strongest defensive lines in college football.

Illinois offensive lineman and senior captain Alex Palczewski played against Wisconsin in 2019 and remembers how difficult it was to face their d-line.

“They’re just a very disciplined front, they don’t make mistakes,” Palczewski said. “They obviously lost their two big guys, but they always reload and have good players. I’m just excited to play against them again.”

Illinois put up 24 points against Wisconsin in the upset-win last season which was more than what its defense usually allowed. The Badgers held teams to an average of 16 points per game last season, and Illini offensive coordinator Rod Smith acknowledges that their defense is always one of the toughest to go against.

Illinois’ offense could make some noise against Wisconsin’s top-ranked defense due to weapons on all parts of the offense. The Illini have four of five returning starters on the offensive line that could open a hole for a deep running back group. If the run game is effective, that opens up the field for Peters to throw to returning targets, such as Josh Imatorbhebhe and Trevon Sidney, or new additions, including Luke Ford and Daniel Imatorbhebhe.

On the offensive side of the ball, Wisconsin doesn’t return nearly as much strength. Last year’s star running back Jonathan Taylor entered the NFL draft and is finding success right now with the Indianapolis Colts, and quarterback Jack Coan will not play due to an injury. The Badgers also lost their top receiver from 2019 and the offensive line isn’t quite settled.

Despite not returning as many players, Illinois linebacker and senior-captain Jake Hansen said that Wisconsin plays the game the right way, which gives Illinois a tough opponent in going up against their offense.

“It seems like a Wisconsin theme, they kind of just do everything right. They don’t beat themselves,” Hansen said. “And they have a good running attack every year, good play-action game off of it. They’re really consistent in what they do… that’s what makes them so difficult.”

Graham Mertz will start at quarterback for Wisconsin, the nation’s highest quarterback recruit in 2019. Senior Garrett Groshek and redshirt sophomore Nakia Watson are listed as co-starters at running back on Wisconsin’s first 2020 depth chart.

Illinois will look to disrupt Mertz in his first collegiate start and slow down a run game that Wisconsin always seems to have. It was turnovers that had been able to jump-start the defense in the past, and Hansen said the team is looking to do the same this year.

“(Turnovers) are always part of our game plan, part of our DNA,” Hansen said. “Our coaches make it a big point of emphasis for us … We’re looking for three (turnovers) at least, and then as many as you can get.”

The Illini haven’t lost an opening-week game since 2010 and look to keep that streak alive on Friday against the Badgers. Despite entering the game as big underdogs, head coach Lovie Smith says his team is excited to finally get back on the field and try and beat the No. 14 ranked team in the country.

“Whenever you come into a game and you start the football season off and you’re three-touchdown underdogs, it gets you going a little bit too, so we’ll be ready to go,” Smith said. “Seems like we’ve waited a long time to get here, for the game week to get here … Our guys have worked hard … we’ll need them all going against a highly ranked, very good Wisconsin football team.”