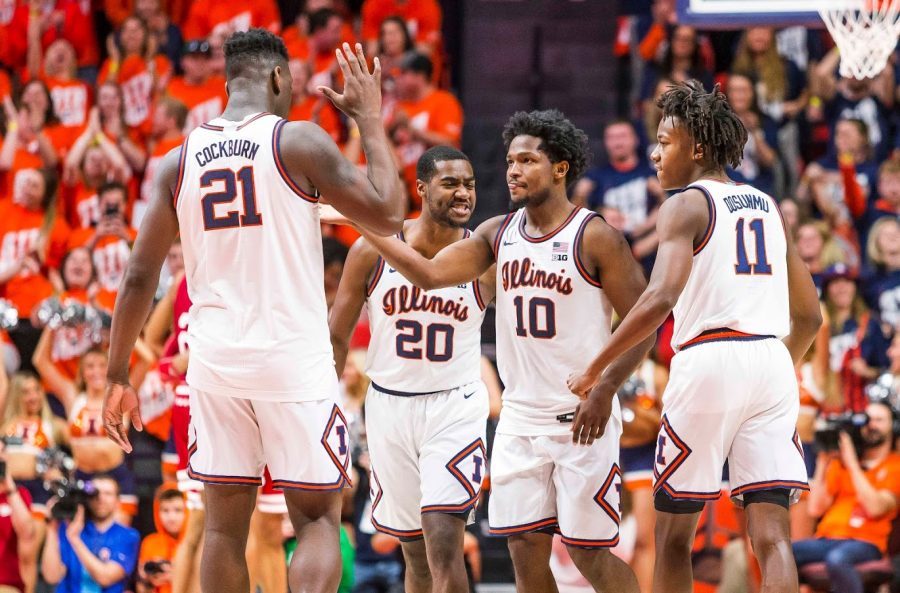 The Illinois men’s basketball team celebrates a successful play during the game against Indiana on March 1.

Q: Reports are saying that Bryce Hopkins is down to Kentucky and Illinois. In your opinion, where does he land? – Zain B.

Q: If the Illini miss on Bryce Hopkins and Mac Etienne, what is plan B?  You’d hate to see them lose momentum with a lost recruiting year. – Mike T.

With Bryce Hopkins set to commit soon, we’ll start here. While Illinois is in the mix, Providence and Indiana are making their final pushes as well. But ultimately, I’d be shocked if he didn’t land at Kentucky. The buzz for Hopkins to Lexington has been strong since they offered and while it’s odd it has taken this long, they appear to be in the best spot.

Illinois is in a much better spot with 2021 center Mac Ettienne, who has no time-table to commit right now. I went more in depth on Ettiene here.

If they can’t land either though, I don’t think it’s time to panic. Brad Underwood did land 2021 sharpshooter Luke Goode who will play on the wing. If they miss on Hopkins, they have extended offers to four-star Wesley Cardet and three-star Tevin Smith. They are not really pushing for any other centers at the moment.

But Illinois could get some more veteran experience in the transfer market. The NCAA recently passed a one-time transfer rule where players can transfer and not have to sit out, starting next season. The number of players entering the transfer portal increases each season and there should be plenty of good centers on the market. With a young dynamic backcourt in Andre Curbelo and Adam Miller, Illinois should be an appealing spot to transfer to.

I also don’t think it’s a foregone conclusion that Kofi Cockburn turns pro. He’s probably not an NBA player, so like Ayo Dosunmu, there’s a chance he decides to return for a third season.

Q: Which Illini player do you expect to surprise/surpass expectations most this season and why? – Gavin G.

Since he committed last fall, I’ve been high on the Andre Curbelo train. While there’s a lot of guards in the rotation, I think Curbelo will ultimately be too valuable to keep off the court. He brings a unique skill set compared to the other guards in that he’s a true pass-first point guard the Illini can run their offense through. His creation skills could lead to more open shots for Trent Frazier and Dosunmu. I believe Curbelo will be the ingredient that takes this team from good to great.

Q: What do you think their defense will look like? Will they make any changes offensively? – Jeff H.

After allowing over 74 points per game the previous two seasons, the Illini were much more sound last season, only giving up 65 per game. They scaled back their pressure in the passing lanes giving up less backdoor cuts.

I expect them to do the same this season. Cockburn is a presence at the rim and they have plus perimeter defenders in Da’Monte Williams and Trent Frazier. Opponents did shoot 33% from three against Illinois, so if they could allow less open threes, then they could be even better.

Offensively, the addition of Curbelo and Miller gives Underwood more toys to play with. They run a lot of three-guard sets where anybody can handle or come off of pick-and-roll. Having Miller or Austin Hutcherson spacing out on the wing should open driving lanes for the ball-handlers.

Q: Who will get the most minutes as the third big in the Illini rotation? – Tristan F.

After Kofi Cockburn, the battle for the power forward spot is wide open. Against smaller opponents, senior Da’Monte Williams seems like the go-to guy. Williams started the last seven games of the season at the four and the Illini went 5-2. For bigger opponents, Giorgi Bezhanishvilli will likely be the choice. But he struggled at the four last year and seems best fit as Cockburn’s backup.

The two X-Factors are Jacob Grandison and Coleman Hawkins. Grandison sat out last season after transferring in from Holy Cross, where he averaged 13.9 points per game and 36% shooting from deep. Hawkins is an unknown given his lanky frame, but he is the best shooter and passer of the bunch. Both Bezhanishvilli and Williams struggled to shoot threes, so playing either Hawkins or Grandison could space the floor.

I expect Williams to be the starter day one, but minutes will be matchup dependent and all four guys will get chances.

Q: Can Ayo Dosunmu win Big Ten Player of the Year? Who are his biggest threats? – Steve S.

But Dosunmu is the player most likely to upset him. Dosunmu improved greatly from year one to year two and that trend should continue. He averaged over 16 points per game without much of a three-point shot, so if that improves he should easily score over 20 points per game. For Dosunmu to win, Illinois will have to win the Big Ten outright and the team’s success and narrative could push him over the top.

With COVID-19 still prevalent, either player could miss games. If a player tests positive, they will have to sit for three weeks which would likely take them out of the race. If that happens, Indiana sophomore forward Trayce Jackson-Davis is a guy who could come in and steal the award.

Q: Will Maryland pose a threat to Illinois again this year? Will the rivalry continue? – Reese L.

The past two seasons, Maryland and Illinois have had some memorable games. Two years ago, the Illini shocked the Terapins at Madison Square Garden. In the first matchup last season, Maryland rallied from a 14-point deficit to beat Illinois in the final seconds. The Illini let another lead crumble the second time around, blowing a 13-point lead as the Terps stormed back and took control in the Big Ten standings.

This season, roles are reversed as the Illini enter as one of the league’s best teams while the Terps while likely be in the bottom half of the Big Ten. Regardless, these teams have played each other tough over the past few years and while Illinois is the better team, it wouldn’t shock me if a veteran Maryland group was able to steal a game from them.