Illini fall to Badgers 45-7 in first game of season 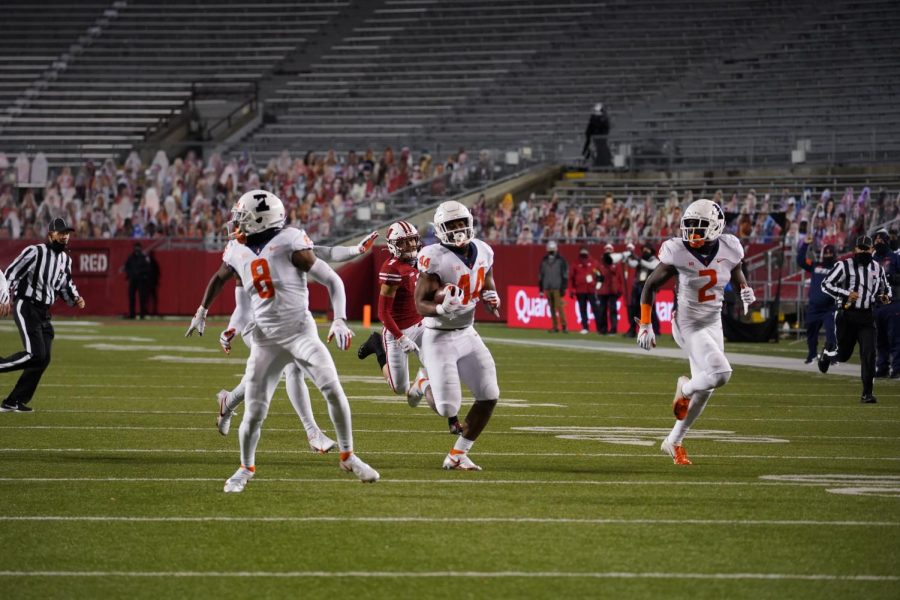 Sophomore Tarique Barnes returns a fumble for a touchdown against Wisconsin on Friday night. The Illini lost to the Badgers 42-7.

The first Illinois football game in 298 days was a highly-anticipated matchup at the No. 14 Wisconsin Badgers who the Illini shocked in an upset just over a year ago. But, Friday night’s Big Ten opener didn’t feature a Tony Adams interception, a Josh Imatorbhebhe touchdown or a James McCourt walk-off field goal. Instead, the Illini were handled 45-7 by the Badgers at Camp Randall.

“Not the night I envisioned as we came up to Camp Randall,” head coach Lovie Smith said. “Thought I had the team more ready, more prepared to play than what we showed out there tonight. We will play better than that. We’re a better football team than that.

“You have to give Wisconsin a lot of credit. They made the plays when they needed to. Their quarterback played outstanding ball. But, we have to give him a lot more competition on some of the touchdown passes on the defensive side of the football. Offensively, we have to be able to run to the football better than that.”

A fumble from junior Mike Epstein on the second play of a game that led to a quick Badgers touchdown set the tone for the game. And while Tarique Barnes would even the turnover battle with a fumble recovery for a touchdown in the second quarter, Illinois’ only score of the game, but the Illini offense never gave them a chance to win.

A Brandon Peters-led offense couldn’t convert when it mattered, failing on three fourth-down conversions in Badger territory and going 2-10 on third-down conversions. The Illini only gained eight first downs compared to the Badgers’ 22.

“We’ve got to stay ahead of the chains, we’ve got to move the chains,” Peters said. “If you look at time of possession, they killed us. It was bad. We’ve got to focus on moving the chains, getting the first downs, executing, completing the football, all those little things.”

“I don’t know if it was tough to get into a rhythm, but obviously we didn’t execute on offense,” Peters said. “We had a lot of errors and we shot ourselves in the foot with not converting on fourth down and penalties as well. When it comes down to it, we’ve got a lot of work to do going forward.”

With no flow ever established, the Illini offense had possession for just 15 minutes and 36 seconds.

Thus, the defense wasn’t set up to succeed. On the field for 43 minutes and 28 seconds, the Illini defense gave up 430 total yards. And in his first career start, redshirt freshman quarterback Graham Mertz tormented Illinois’ secondary, throwing for 248 yards.

“(Mertz) completed the passes,” Smith said. “A lot of those routes where we had one or two guys going out, we have to be able to play better coverage than that. Wisconsin stayed true to their system… they just executed the system tonight a lot better than we did.”

The Illini only got weaker on the defensive end after senior linebacker and team captain Jake Hansen was injured at the end of the first quarter and did not return to the game.

Mertz didn’t show his full capabilities until the second quarter. He threw three more touchdowns, two coming within 30 seconds of each other just a minute before halftime to give the Badgers a 28-7 lead.

The Badger offense didn’t let up in the second half. While Mertz threw just one more touchdown pass, Wisconsin’s run game picked up rushing for 120 yards and a touchdown, taking advantage of a tired Illini defense. Wisconsin would cap the game off with a field goal to push the lead to 45-7.

Illinois will head back home for next Saturday’s 11 p.m. matchup against Purdue at Memorial Stadium. The Boilermakers host the Iowa Hawkeyes Saturday afternoon in their season opener.

“A game like this, it creeps up on you,” Smith said. “You go back to work. We have an extra day and we need that extra day. …Now we can really judge our guys based on game action. We’ll put a better group together next week, a better game plan together.”