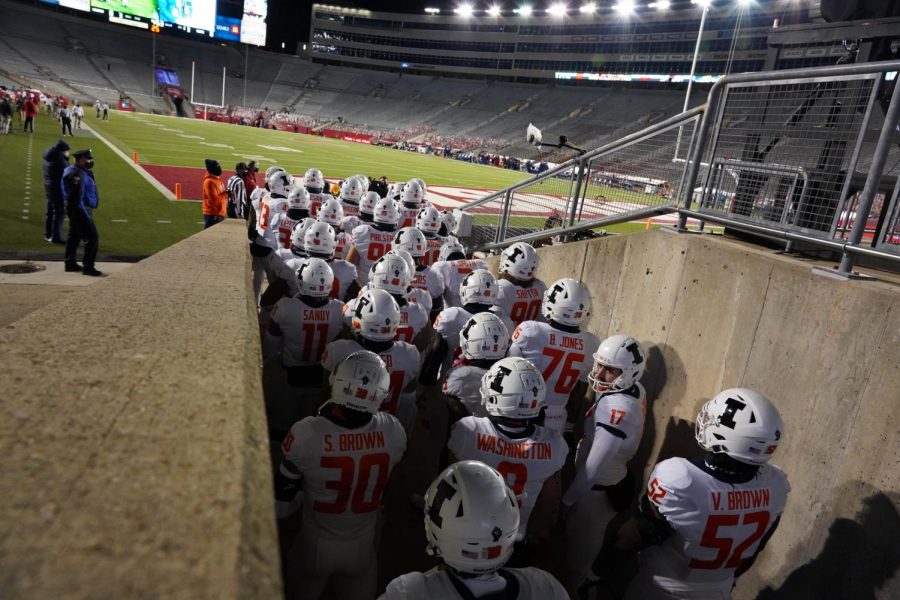 The Illinois football team enters Camp Randall Stadium in Madison, Wisconsin before the game against Wisconsin on Friday. The Illini lost the game 45-7.

A typical Wisconsin football game shuts down the city of Madison. A sea of red floods the streets of campus, slowly filing into bars, house parties or Camp Randall Stadium.

“I would’ve finished up school early, put some off for the weekend,” said Wisconsin junior Mitchell Josvai. “Especially for a night game, you just start so early. We probably would’ve had people over at our house. We threw a couple tailgates, pregames last year. Just drinking, hanging out, listening to music, getting ready for the game, getting pumped up. At some point I would’ve made it over there and gone to the game.”

In the Big Ten’s season opener on Friday night, the commotion from the near 81,000 fans would’ve shook my press box seat as the Badgers exposed the Illini’s Homecoming upset last year was — probably — an anomaly following a convincing 45-7 win.

“It’s electric,” Josvai said. “It’s super fun. The whole city kind of shuts down for it here. Everyone’s wearing red. It’s kind of the only thing anyone does on Saturday afternoons, like you don’t see anyone going anywhere else.”

Instead, I sat quietly and calmly in my press box seat, staring at the empty stands, listening to piped-in crowd noise. A few minutes before kickoff, the Badgers ran out of the tunnel to silence and the Illini weren’t met with boos.

The reality of sports in a coronavirus-filled 2020 set in. No marching bands or pep squads to get the stadium hyped up. No rowdy, drunk fans to provide extra entertainment. Just muffled, fake crowd noise and cardboard cutouts that only filled a couple rows in the stands.

I sat in the press box for almost seven hours and never got used to the sports in COVID-19 atmosphere. There were times I missed what happened on the field because there were no screams or cheers to indicate what kind of play was made.

And, most importantly, after the third quarter, only the players danced to a faint snippet of “Jump Around.”

“It’s ‘Jump Around’ every time,” said Josvai about his best memories at Camp Randall. “The whole student section jumps up and down and shakes the entire stadium … it was all just the players doing it. You do feel like you’re missing out because you only have so many years in college to be in the student section. And to miss out on a whole one, it does feel like you’re missing something this semester and there’s not as much to look forward to.”

Josvai, along with the majority of campus, elected to watch the game from his couch with friends and roommates Friday night, but with no more than 10 people, of course.

“Lots of students (watched) the game either from home or from bars or restaurants tonight since they can’t be there in-person,” said Wisconsin junior Zack Hurst. “Bars (weren’t) super crazy (Friday night), at least the one I’m working at, because all the bars down here have social distancing requirements so we can’t pack them anywhere near as tight as we could’ve before COVID, but they’re all still pretty busy.”

While there were small groups of students decked in Wisconsin gear — some with masks, some without — heading to find a place to drink, most bars in Madison were noticeably dead.

With the University of Wisconsin Police Department enforcing the 25% capacity rule, Josvai said he thinks most students were put off by the bar scene, not a typical feeling for Wisconsin students.

The fairly empty streets just hours before kickoff and the awkward vague field noise that filled Camp Randall were eerie enough. But, the silence outside the stadium following a dominant season opening victory at midnight in one of the most vibrant college towns in America perfectly illustrated what it’s like to play sports during a pandemic.

“It was weird,” Josvai said. “It felt like it was an away game. Everyone was still wearing red, but there weren’t as many people out at all. There wasn’t the normal buzz you would get where everyone’s excited to tailgate.

“It just felt like we were playing away or it was a Packers game or something where everyone knows there’s a game, everyone’s looking forward to a game, but it doesn’t feel like it’s actually there.”