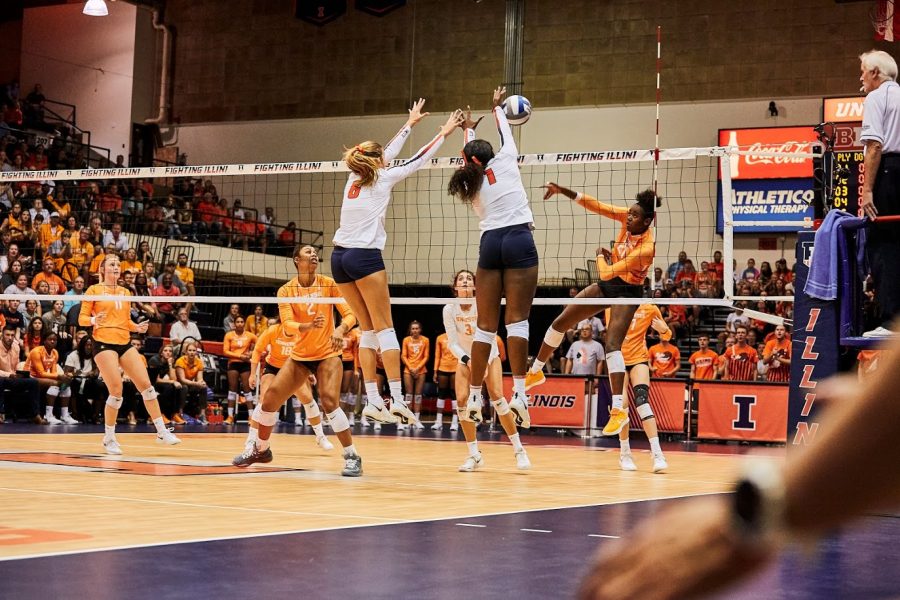 Sophomores Kyla Swanson and Kennedy Collins block a spike during the match against Tennessee on Sept. 1, 2019. Collins and two of her teammates stayed in touch last semester to workout over zoom.

In recent years, Illinois volleyball has developed a rich history of excellence at the middle blocker position, with players like Ali Bastianelli and Ashlyn Fleming leaving marks on Illini record books. Now that they’ve both graduated, the team’s next generation of middle blockers — sophomores Rylee Hinton, Kennedy Collins and Kyla Swanson — will get the chance to seize the spotlight.

Last season, Fleming spent a lot of time helping set the table for today’s trio of sophomore middle blockers. As she was dominating on the court, Fleming also found the time to nurture and mentor her younger teammates off it.

“(Fleming) was an amazing player, there’s no doubt about that,” Hinton said. “I think (what helped) more was her demeanor. She’s so willing to help. It says a lot for a senior like that to reach out to the freshmen and the new kids and just take them in and show them the ropes. It was really nice having someone like her who I’m really comfortable with.”

The time Fleming spent with her younger teammates blossomed into an intimate and collaborative relationship.  Last year, the middle blockers went as far as labeling her their “middle mom.” Now that she’s graduated, there will be big shoes to fill on the court. As a result of her mentorship, the players seem more than prepared.

“(Fleming) left us in a good place,” Swanson said. “She did everything that she could and now it’s up to us to fill that role. We want nothing but to do as good or even better than she did, and I know she wants that for us, too. We’re excited to be able to step up and do what we can to contribute to the team”

Beyond just her quality of play, Fleming also took up a large portion of the quantity, as she played 118 sets last year. Collins is likely to see the most action of the trio after playing 96 sets last season, a significant number when compared to Hinton’s 29 and Swanson’s 16. Swanson may be a dark horse candidate to see a jump in playing time, as she has worked to reinvent her game from the ground up since she came to Illinois as a freshman.

Despite competing for the same minutes, all three players seem to have a positive and supportive attitude towards each other. They are an incredibly tight group, and Collins and Swanson are roommates this year.

“I’m so proud of the relationship that we have on the court,” Hinton said. “Three middles can’t play, but we all genuinely want everyone to do good. If someone plays over someone else, there’s no animosity. We all support each other wholeheartedly. We want the best for the team.”

After students transitioned to remote learning last semester, Hinton, Swanson and Collins stayed in touch by working out together over Zoom every morning.

While most of the work over quarantine was to try to maintain a feel for volleyball, the intensity returned immediately when they got back in the gym at Illinois.

“(For) a lot of teams, it would be easy to not take this time as seriously,” Swanson said. “I feel like we’ve gone into the gym with a really determined mindset every single day. It’s really hard to focus right now on the things that we can control when there’s so much around us that we can’t control, but I feel like we’ve done a really good just with doing what we can. We’ve been given eight hours a week in our offseason, and we’re doing what we can do to capitalize on that.”

With the work they’ve put in, all three feel they’ve become much better players than they were even at the end of last season. The largest point of emphasis from the coaching staff has been to work on blocking.

While it may seem simple, blocking requires exact control of every body part. According to Swanson, perfecting blocking requires precise footwork, arm speed and timing. It’s supposedly much more difficult than it seems from an outside perspective.

“I feel like middle blocker is almost an attitude,” Swanson said. “It’s a lot of work that people don’t realize all the time. Having to block three or four attackers coming at you from the other side of the net, I feel like I bring that attitude to make all those moves at the net to be an efficient blocker.

“You really have to have the mindset to work hard and do your best to get involved in every play. Fight for any little touch on the block because even if you get one finger on the ball from a hitter, it’s a slowdown that can help benefit the team.”