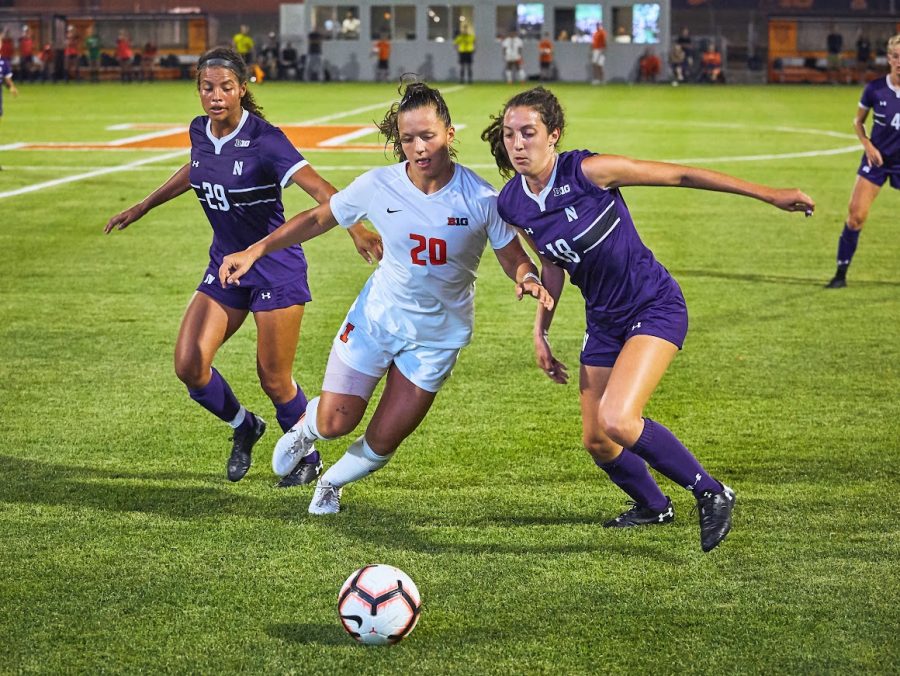 Junior Makena Silber battles for control of the ball during the game against Northwestern on Sept. 20, 2019. Illinois won the game 3-1.

Illinois soccer alum Kelly Maday graduated this May. The Wilmette native was a two-year starter up top as a forward. She finished her Illini career with 12 goals and 11 assists, and she was nominated for the Dike Eddleman Female Athlete of the Year award her senior year.

With Maday graduating, a spot in the lineup is up for grabs. For the past two years, Maday has been playing up top with current junior forward Makenna Silber. Maday was the type of player that was fast and able to get behind the backline, while Silber stayed more central forward and held the ball.

“We worked really well off each other,” Silber said. “We’re two very different players, and we complemented each other well.”

Senior midfielder Hope Breslin, who played in the midfield behind Maday and Silber, said the dynamic the two of them had worked for the midfield.

“As a midfielder, you really want to look for that; you like having multiple options,” Breslin said. “I liked always having them there because they always had something different on their minds.”

With nine forwards on the roster, without Silber, it’s anyone’s game to grab a forward spot. For the past year, Illinois has been playing a 3-5-2 formation since it suited Silber and Maday well. In the spring, the formation can change: adding three, keeping two or even going down to one on top.

Rayfield is looking for a player to complement Silber as well as fill in the speedy, get behind the backline and goal-scoring threat type of forward that Maday was.

“I think we’re going to have to fill her (Maday’s) shoes with several different people, certainly Makenna Silber will take a lot of the goal-scoring threat, but I think the pace that Kelly (Maday) brought will sort of be a contribution of people like Ashley Prell, Haley Singer and Julia Eichenbaum,” Rayfield said. “You’re really going to see them fill in the part about being dangerous in terms of speed and ability to get behind defenses.”

With Friday Night Lights replacing the fall season and helping prepare for the spring, it allows Rayfield and the team to figure out what works best. Currently, the competition for starting spots is underway and she’s looking for players with goal-scoring ability.

“There’s a battle for every position and when it comes to replacing Kelly Maday, I think it’s going to be we’ve got to find two or three players to score goals for us in order to make up for the hole that she leaves with graduation,” Rayfield said.

Throughout Maday’s Illini career, she was plagued with a left knee injury. She wouldn’t attend practice every day and instead underwent therapy and rested her knee to get ready for matches.

“She did a special kind of training called blood flow restriction training where she would essentially put on a blood pressure cuff (on her knee) and do exercises that she could strengthen the muscles without putting the strain on her knee,” Rayfield said.

The prolonged injury became a constant problem during Maday’s sophomore year. However, she still played and gave her all in every game that led to her having a tremendous senior year.

“The fact she could play 60 or 70 minutes at the level she did and be as effective as she was as a senior was pretty much phenomenal,” Rayfield said. “I’m not so sure anyone else would have been able to deal with what she dealt with and produced the way she produced.”