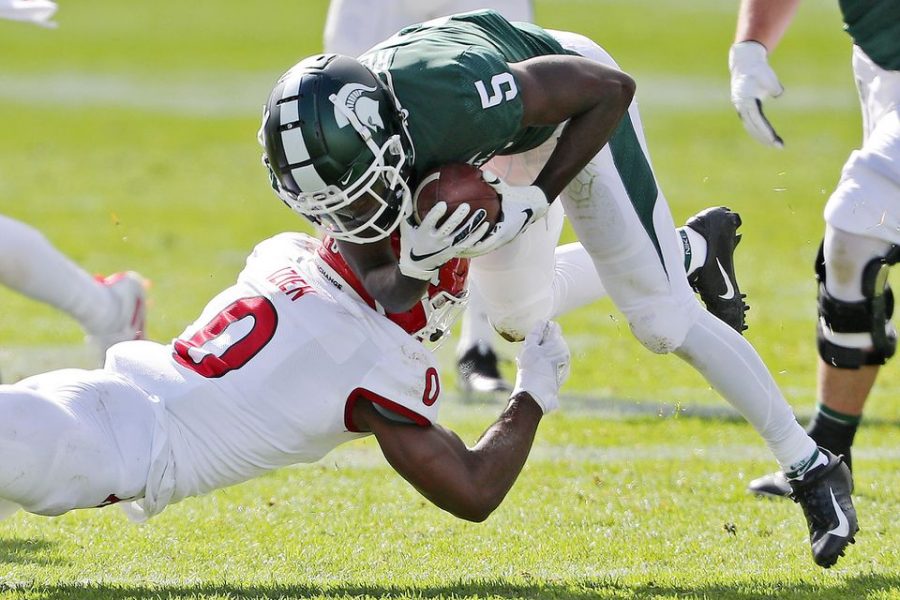 Michigan State wide receiver Jayden Reed is tackled by Rutgers defensive back Christian Izien during their game at Spartan Stadium in East Lansing, on Saturday.

Big Ten football is back.

After months of protests and controversy, the Big Ten Conference reversed its decision to postpone football to the winter or spring and chose the weekend of Oct. 23-24 for Big Ten football to return. Though the Illini had a week to forget in Madison, let’s take a look at how other teams fared around the conference.

Entering the game as 28-point favorites, No. 5 Ohio State proved why it is one of the top programs in the nation. The Buckeyes easily handled the Cornhuskers behind three total touchdowns from star quarterback Justin Fields, while the Ohio State defense forced two turnovers, including a 55-yard fumble recovery touchdown early in the third quarter. Though the Buckeyes only led by 10 at halftime, a dominant second half performance led to a comfortable win for the Big Ten title favorites, who jumps up two places to No. 3 in the nation. Nebraska returns home to take on No. 9 Wisconsin next week, while Ohio State travels to University Park to take on No. 18 Penn State in one of the most highly anticipated matchups in the Big Ten this season.

The Scarlet Knights snapped their 21-game losing streak in the Big Ten behind seven Spartan turnovers, including five lost fumbles. Rutgers dominated on the ground, rushing for over 100 yards and four touchdowns as a team, while Michigan State quarterback Rocky Lombardi finished the game with 319 passing yards and three touchdowns. With the win, the Scarlet Knights are guaranteed their best Big Ten finish since 2017. Rutgers faces Indiana in their home opener next weekend, while Michigan State faces No. 13 Michigan in a battle for the Paul Bunyan Trophy.

In arguably one of the most surprising results of the weekend, unranked Indiana defeated No. 8 Penn State at home by only a matter of inches in dramatic fashion in overtime. After struggling during the first four quarters, Indiana quarterback Michael Penix Jr. completed a 9-yard touchdown pass before barely sneaking in the 2-point conversion to edge the Hoosiers past the Nittany Lions. Though Penn State dominated Indiana in terms of total yards, 488 to 211, the team fell in the more important statistic and dropped to No. 18 in the national rankings while Indiana jumped up to No. 17. Indiana travels to Piscataway to face Rutgers, while No. 18 Penn State will have to quickly shake off the loss before returning home to take on No. 3 Ohio State.

Without head coach Jeff Brohm and star receiver Rondale Moore, Purdue snuck past Iowa 24-20 via two fumble recoveries, including one with just over eight minutes left that halted a promising Iowa drive. The story on offense was sophomore Boilermaker wide receiver David Bell, who finished the game with 121 yards and a career-high three touchdowns. Iowa quarterback Spencer Petras struggled in his first career start, as he is still waiting for his first passing touchdown of his collegiate career. Purdue travels to Champaign next weekend to take on Illinois, while Iowa heads back to Iowa City to take on Northwestern.

The Wildcats easily took down the Terrapins Saturday behind 537 total yards and four forced turnovers. Taulia Tagovailoa, brother of former Alabama and current Miami Dolphins starting quarterback Tua, got his first career start against the Wildcats, though it certainly didn’t go according to plan. The sophomore finished 14-for-25 with 94 yards and three interceptions. The Wildcats also out-rushed the Terrapins 325 to 64, including 103 from sophomore Drake Anderson, while also shutting out Maryland across the final three quarters. Northwestern travels to take on Iowa next week, while next week’s showdown with Minnesota won’t be much easier for struggling Maryland.

In arguably the most talked about game in this opening weekend, No. 18 Michigan handled No. 21 Minnesota on the road behind two total touchdowns from junior quarterback Joe Milton and running back Hassan Haskins. Though Minnesota running back Mohamed Ibrahim rushed for 140 yards and touchdowns, Michigan’s defense was able to force two turnovers and a fumble recovery returned for a touchdown in the opening frame. With the win, Michigan jumps up to No. 13 while Minnesota drops out of the top 25. Michigan will hope to continue its winning ways against in-state rival Michigan State, while Minnesota heads to College Park to take on the struggling Maryland Terrapins.