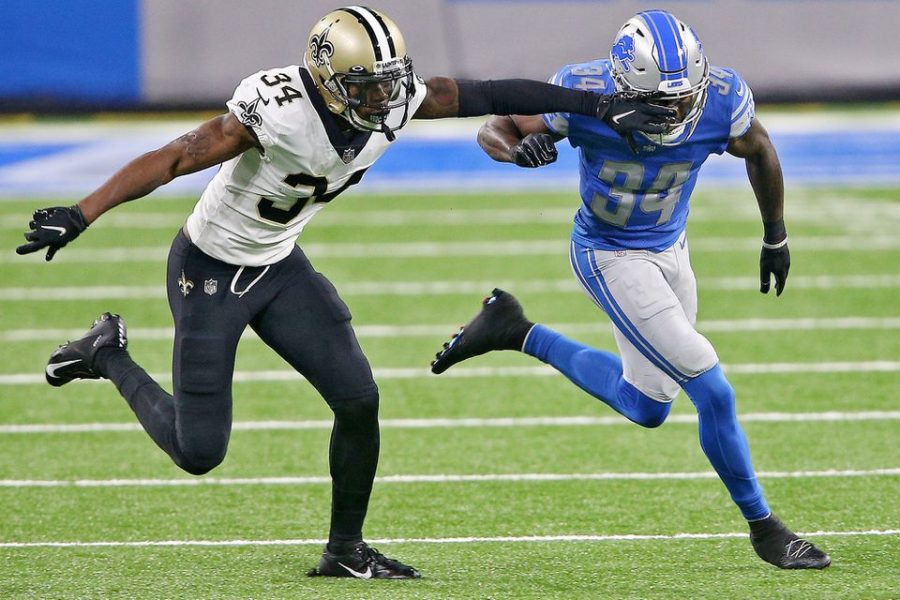 Detroit Lions cornerback Tony McRae and New Orleans Saints defensive back Justin Hardee Sr. run up the field during their NFL game at Ford Field in Detroit, Michigan on Oct. 4

Illinois’ football program has produced many top talents, including six current Pro Football Hall of Famers. Despite getting off to a rough start this season, the Illini have a few current players who could follow that same path and break the school’s brief hiatus from the NFL draft. While several Illini continue to try and prove themselves to NFL scouts, let’s take a look at how 10 former players have done over the past two weeks.

After seeing only eight offensive snaps during the 2019 season, Allegretti has gotten significantly more playing time following an injury to starting right tackle Mitchell Schwartz. Allegretti notched his first career start against the Denver Broncos in Week 7, while he also earned a shout-out from Fox Sports analyst and Hall of Famer Troy Aikman during the Chiefs’ Monday Night Football victory over the Buffalo Bills in Week 6.

“I tell you the guy I’m really impressed with is Nick Allegretti, the second-year player out of Illinois, a seventh-round pick,” Aikman said. “He is just destroying people upfront. He’s just moving people out. This guy’s something.”

In his third game of the season against the New York Jets in Week 6, Fejedelem doubled his season tackle total, making one tackle in the team’s 24-0 victory. The showdown with the Jets also marked Fejedelem’s first, and only, defensive snap of the season, as he continues to see a large majority of his playing time with the special teams unit. After having their bye week in Week 7, the 3-3 Dolphins return to action against the Los Angeles Rams in Week 8.

Five games into the season and Hardee has yet to see a snap on the defensive side of the ball, instead only getting playing time on special teams. After missing the Saints’ Week 5 matchup with the Los Angeles Chargers due to a hamstring injury, Hardee returned for the Saints’ Week 7 win over the Carolina Panthers, taking the field for 77% of the team’s special teams snaps.

Karras continues to embrace his leadership role in his first year with the Dolphins as both a team captain and the team’s starting center. The Indianapolis, Ind., native has been on the field for every offensive snap so far this season, and he looks to continue that streak against the Rams on Sunday.

After back-to-back big performances against the Pittsburgh Steelers and Minnesota Vikings in Weeks 3 and 4, respectively, Mercilus’ production has slowed in the past two games. He recorded one tackle and one quarterback hit across those two game days. After a rough 1-6 start to the season, the Texans will get a much-needed off week for Week 8 before returning to action in Week 9 against the Jacksonville Jaguars.

Phillips’ Week 1 appearance in the Bills’ victory over the Jets continues to be his only game so far this season, and he is now on the injured reserve list with an injured quadricep. There is currently no timetable for his return.

Smoot is arguably the most consistent player on defense among former Illini this season, and he has continued that trend over the past two weeks. Smoot made two total tackles and one quarterback hit in the Jaguars’ Week 6 win over the Detroit Lions, while he was credited for 0.5 sacks, two total tackles and two quarterback hits in Week 7 against the Chargers. After winning their opening game, the Jaguars are on a six-game losing streak and will need to recoup during the bye week before they head to Houston in Week 9.

After getting his first two offensive snaps of the season in the Cowboys’ Week 4 loss to the Cleveland Browns, Turner has been listed as inactive over the past three weeks, and a timetable for recovery has yet to be announced. Turner is still looking for his first target and reception of the season.

In the team’s Week 6 victory over the Philadelphia Eagles, Ward saw a slight drop in playing time against his hometown team, though that didn’t stop him from being productive while on the field. Ward registered his first sack of the season for the Ravens, while he also made two total tackles, including one for a loss. Coming off a bye week, Baltimore is in for a challenge in Week 8 on the road against the undefeated Steelers.

After seeing nine defensive snaps in Week 5, Wilson did not get any playing time on defense in Week 6, while he did make one tackle on special teams. Wilson continues to receive inconsistent playing time with the defensive unit despite being listed on the depth chart as the team’s second-string strong safety, and it is unclear how the Colts will use him in future games.