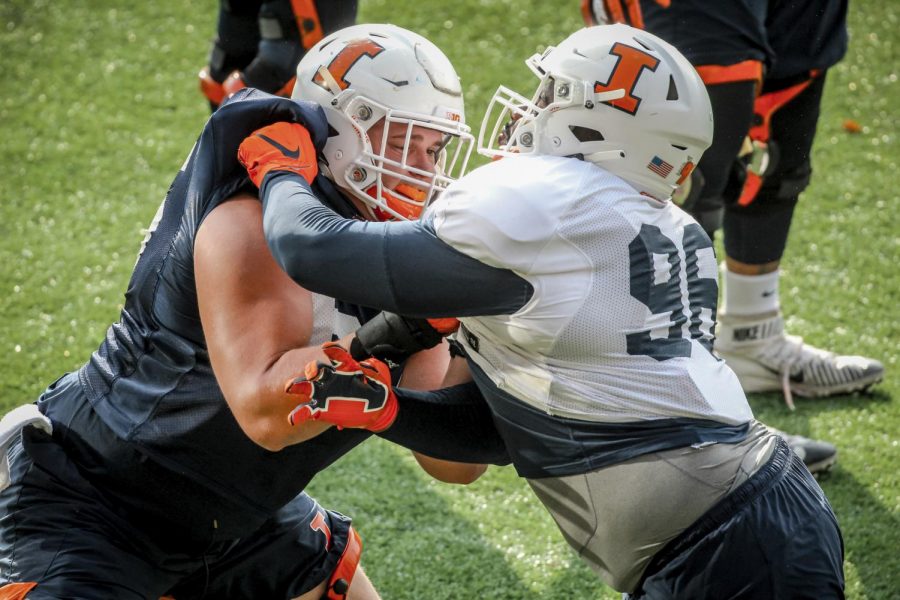 Senior defensive lineman Roderick Perry II blocks a teammate during practice on Oct. 12. Perry and Tarique Barnes were some of the only bright spots to come from Illinois’ loss to Wisconsin Friday night.

Illinois’ execution on both sides of the ball Friday night against Wisconsin was underwhelming. An offensive shutout with only eight first downs forced the defense to spend over 43 minutes on the field, resulting in 45 points allowed.

Thus, the only positive takeaways from Illinois’ trip to Madison came from the defensive side of the ball in sophomore linebacker Tarique Barnes and senior defensive tackle Roderick Perry.

After senior linebacker Jake Hansen was injured at the end of the first half, Barnes stepped in to score the only points of the game for the Illini with a fumble recovery for a touchdown. Barnes also totaled nearly as many tackles in three quarters as he did in all of the 2019 season.

“We have to acknowledge Tarique coming in,” said head coach Lovie Smith. “That’s a tough situation. Jake Hansen is captain, one of our best players. When you’re a backup you don’t get as many reps but you have to be ready mentally.

“It’s good to see him do it and we needed to at the time. We talk a lot about taking the ball away. We needed a lot more of those.”

Barnes led the Illini against the Badgers with 11 total tackles and fell just under defensive backs Nate Hobbs and Sydney Brown with seven solo tackles. He also had 1.5 tackles for loss and a team-high one sack.

The Memphis, Tennessee, native played in all 13 games last season but saw his minutes primarily with special teams. Barnes finished his freshman campaign with 13 total tackles and eight solo tackles.

But, Barnes didn’t shy away from succeeding in the spotlight when the opportunity arose.

While Barnes had the best stat line against Wisconsin, Perry was the most disruptive player in the front four, bullying his way into the backfield several times Friday night.

Perry, a grad transfer from South Carolina State, made his presence known quickly. He recorded a tackle for loss on Illinois’ first defensive play of the game by taking down Wisconsin running back Nakia Watson.

“That play right there, I saw it so many times in practice,” Perry said. “Then I saw it in the game, and I was like, ‘Oh, it’s on.’ Then I just attacked the center, released him, made a tackle in the backfield. I was like, ‘Dang, I really just made that play, and I’m in the Power-Five. I’m really here.’”

Perry had a solid start to his collegiate career, totaling 32 tackles and 6.5 tackles for loss in his first two seasons at South Carolina State. But, in 2019, the Raleigh, North Carolina, native broke out.

In his third year with the Bulldogs, Perry recorded 34 tackles, 14.5 tackles for loss and 4.5 sacks. He was graded 91.1 by Pro Football Focus following the 2019 season and once Perry transferred to Illinois, college football analyst Phil Steele rated him the highest draft-eligible defensive tackle in the Big Ten.

But, the question was, as it is with most players who come from FCS schools, whether Perry be disruptive at the Power-Five level. For Smith, Perry fits the bill perfectly.

“There’s not a whole lot of positive things I can really talk about from how we played defense this past week but Rod was one,” Smith said. “He’s got a low center of gravity, he’s extremely strong, got good quickness. Just everything you’re looking for in an interior lineman, he has.

“We needed for him to get out. He practices against an outstanding center and guards each day, so I think it was good for him to see how he matches up against other competition. Very pleased with how he played, a good coming-out party for him. That’s what gives us hope.”