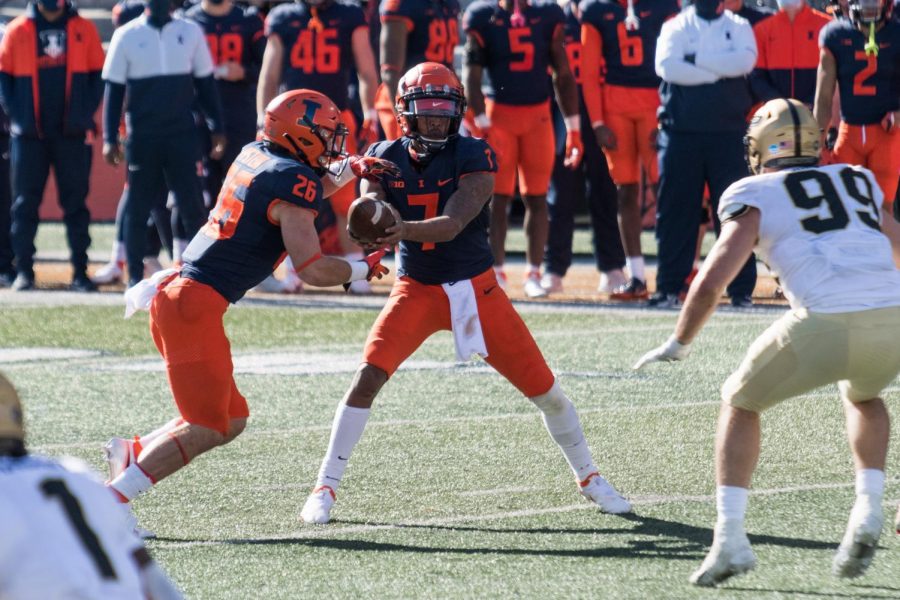 Illinois quarterback Coran Taylor hands the ball off to running back Mike Epstein during the game against Purdue on Oct. 31. The Illini fell to the Boilermakers 31-24.

The Purdue Cannon trophy once again belongs to the Purdue Boilermakers as they came into Memorial Stadium and defeated the Illini 31-24 on Saturday afternoon. The defeat marked Illinois’ first loss in a home-opener since 1997.

Illinois announced one hour before kickoff that two players — senior quarterback Brandon Peters and redshirt tight end Griffin Moore — had tested positive for the coronavirus and would be out for Saturday’s game.

Fourteen Illini were listed as out, and at least six were due to contact tracing, including senior center Doug Kramer, senior kicker James McCourt and redshirt freshman Isaiah Williams.

“We had a couple positives, that’s it,” head coach Lovie Smith said. “The rest were contact tracing… it kinda hit us late in the week and this is where we are.”

With both Peters and Williams listed as out, offensive coordinator Rod Smith turned to Matt Robinson to start the game for Illinois.

After stopping the Illini on the first drive of the game, the Boilermaker offense got to work quickly by moving down the field fast. Junior running back Zander Horvath finished off a five-play, 80-yard drive with a 1-yard touchdown run to start the scoring.

Matt Robinson did not come back onto the field for Illinois’ second drive due to a lower-body injury, putting fourth-string quarterback Coran Taylor into the game. The sophomore’s only playing time as an Illini was in the fourth quarter versus Rutgers in 2019.

“Normally one or two guys get reps throughout the week, that’s about it. So to step into that situation and run the offense, that says an awful lot (about Coran),” Lovie Smith said of Taylor. “It’s just hard stepping into the huddle for the first time and just running the offense.”

Despite getting into the red zone four times in the half, Illinois was only able to score points on two different possessions.

Taylor threw an interception and fumbled the ball in the second quarter on back-to-back drives, and Purdue capitalized in between with a 45-yard touchdown pass from O’Connell to sophomore Milton Wright.

After the Taylor fumble, however, Purdue fumbled the ball and gave it right back to Illinois.

Taylor led a 49-yard drive that finished with the Illini’s first touchdown of the year on a Mike Epstein 7-yard run.

The teams traded field goals at the end of the quarter and the Illini went into halftime trailing the Boilermakers 17-10.

Purdue began the half with a promising drive, but Johnny Newton knocked the ball out of Horvath’s hand on the one-yard line and senior linebacker Jake Hansen recovered it, giving Illinois the ball on their own 1.

The Illini could not capitalize on the turnover as Taylor threw his second interception of the game, and the Boilermakers capitalized with a 3-yard touchdown reception by sophomore receiver David Bell, extending their lead to 24-10.

Turnovers were a problem for both teams all game long, but six by the Illini offense, three of which were by Taylor, cut five drives short and led to three Purdue scores.

“The turnovers are obvious, I mean you can’t turn the ball over,” Lovie Smith said. “With practice we should be able to clean up a lot of things.”

After multiple stops and Taylor touchdown throws to senior Daniel Imatorbhebhe and junior Brian Hightower, the Illini cut the Purdue to lead to 31-24. Imatorbhebhe and Hightower’s touchdowns were each transfer’s first as an Illini.

After a big stop on defense, the Illini were unable to score and turned the ball over on downs in the red zone. On a third and 11 play, David Bell made an outstanding one-handed grab that clinched the game for the Boilermakers, as they defeated the Illini 31-24.

“We had the ball with a chance to win, we were gonna go for two at the end,” Lovie Smith said. “So considering everything that’s happened, I was definitely pleased with our effort…. Did we handle a tough situation? Yes, we did. Next time we’ll finish the job.”

Illinois falls to 0-2 on the year and will host Minnesota next Saturday at 2:30 pm CST.