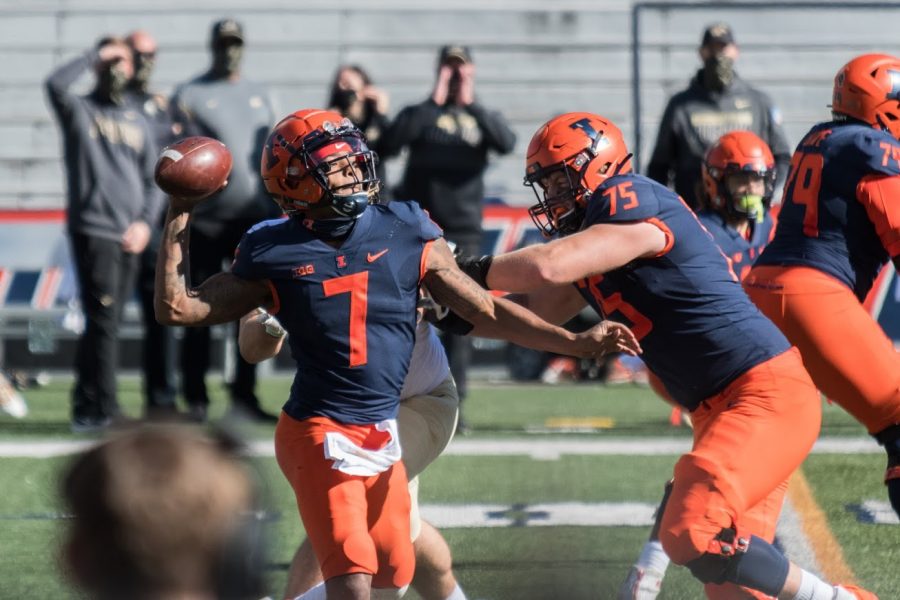 Sophomore quarterback Coran Taylor throws a pass under pressure during the game against Purdue on Oct. 31. The Illini fell to the Boilermakers 31-24.

The coronavirus has ravaged families, the economy and Illinois’ quarterback depth chart. A fourth-string quarterback virtually never expects to put on the pads and play meaningful minutes. But, in 2020, it might just be the new normal.

After senior quarterback Brandon Peters’ positive test, redshirt freshman quarterback Isaiah Williams being exposed to the virus and sophomore quarterback Matt Robinson’s injury, the Illini relied on redshirt sophomore Coran Taylor, with results ranging from dynamic to sloppy. Despite the loss, the offense provided life and hope, setting a blueprint for future success.

But where do the Illini go from here? Well, depending on the status of Robinson, Taylor will take over under center while Peters quarantines for 21 days.

A brief look at some stats would lead people to believe Taylor played a fine game; 273 yards and a couple of touchdowns did spark life into an inept Illini offense, but four turnovers from the Peoria native dug the Illini too deep of a hole.

“I thought he threw the ball well at times … It’s just hard stepping into the huddle,” head coach Lovie Smith said. “Another week of practice and he should be in better shape for the Minnesota game.”

Robinson received the start Saturday, his third in an Illini uniform. Robinson, though he didn’t lead the Illini to any scores, played efficiently. But an injury in the first quarter knocked him out for the remainder of the game, leading Smith to call on his fourth-string quarterback.

Purdue stunned Iowa last week, 24-20, with a surprise stout performance from its defense, which gave up 30.6 points per game last season. But despite having to play Taylor, Illinois played much better than they did against the Wisconsin.

First, Illinois established a running game with its running backs. After being held to 47 rushing yards in Madison, the offense line and running backs manufactured 145 yards, opening up the passing game for an experienced Taylor.

Second, Taylor’s ability to spread the wealth with the wide receivers showed fans the Illini do have a diverse and talented set of pass-catchers. Last week, Peters’ infamously targeted senior wide receiver Josh Imatorbhebhe and failed to get others involved in the air attack. Taylor wasn’t tied to the University of Southern California transfer, however.

Josh Imatorbhebhe caught four passes, accounting for less than a quarter of receptions. The tight ends took a step forward today with junior tight end Daniel Barker finishing with 74 yards while Josh’s older brother, Daniel, had a breakout game with 43 yards and a touchdown, his first since 2016.

“He’s practiced well,” Smith said of the USC transfer. “(There’s) a reason why we brought him here. All three of our tight ends made plays throughout the day, and we’ll try to get them in the mix more.”

But the biggest development was Taylor’s connection with Miami transfer junior wide receiver Brian Hightower, who finished with 97 yards and a score. Later in the game, Taylor leaned to Hightower to make big plays, including the touchdown that brought the Illini within a score.

“Yeah, I looked good,” Taylor said. “I was calm and collected. It was a little bit rowdy at first. But, after the first couple snaps, I was good.”

Of course, Taylor did play better than most would expect. However, his mistakes played a huge role in the defeat. The sophomore’s turnovers led to 21 points for Purdue, including Taylor’s fumble at the Illini 3-yard line. More than that, Taylor had trouble with handing off the ball at times, resulting in near turnovers.

The immediate future indicates Taylor will lead the offense. But while Taylor did show some dual-threat talent, the Illini won’t be able to run the full playbook.

“You have to (simplify the offense),” Smith said. “You can’t do all of your plays you would with a fifth-year Brandon Peters.”

So, the Illini played a fourth-string quarterback, allowed 21 Purdue points off of turnovers, played without senior center Doug Kramer and ran a limited playbook while still being just eight yards away from forcing overtime.

Taylor, who played confidently despite setbacks, ran a more lethal offensive attack in the fourth quarter than Peters did all last game. Though the Purdue loss puts the Illini in a 0-2 hole, a continued focus on getting more talent involved in the passing game while securing a running game will allow this Illini team to be Smith’s most talented offensive squad yet, even without Peters.