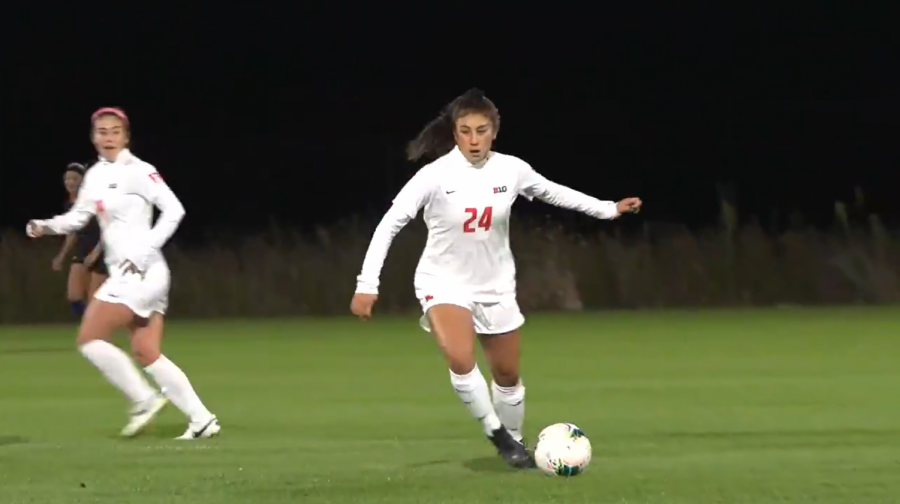 The series is a best-out-of-three between the two inter squad teams. Both teams have been set for the series and will stay the same throughout all three games.

In the first game of the series, head coach Janet Rayfield put senior goalkeepers Sami Sample and Elizabeth Cablk in goal for the whole 90 minutes. In the second game, both freshmen keepers, Julia Cili and Natalie Phelps, were put in goal.

With Team Blue down 1-0 in the series and losing 4-1 two weeks ago, they were looking to bounce back.

After a scoreless 15 minutes of the game, a free kick was given to Team White after a foul just outside the box from sophomore defender Aleah Treiterer. Senior midfielder Hope Breslin stepped up to take the ensuing free kick.

Breslin sent in a high cross towards the back post, and redshirt senior defender Henar Urteaga jumped over two defenders to score a header to open the scoring in the 16th minute of play.

The next goal came from Team White again. An intercepted pass from junior defender Ashleigh Lefevre to freshman forward Julia Eichenbaum saw the ball land at the feet of sophomore midfielder Lilian Lucas.

Lucas took a shot about 25-30 yards from goal heading towards Cili. Cili pawed it away onto the bar but hit the wrong side of the bar and landed into the goal, putting Team White up 2-0 in the 25th minute of play.

Under a minute after the goal from Lucas, Team Blue responded with some build-up play after kick off.  The ball got to junior forward Lauren Stibich, who sent in a curling cross to the box. Redshirt sophomore defender Kendra Pasquale got on the end of the cross and tapped it past Phelps to get Team Blue on the scoreboard, cutting the team’s deficit in half.

In the 27th minute, Lefevre had the ball in the defensive half. After Team Blue put on pressure, she sent a pass across goal but didn’t make it to Urteaga’s feet. Freshman forward Zoey Kollhoff picked up on the mistake and took advantage with a chip shot over a sliding Phelps, knotting the game up at two goals apiece.

With less than 10 minutes left in the first half, senior forward Katie Le sent a through ball to sophomore forward Ashley Prell. Urteaga came in to defend and shielded the ball from Prell for Phelps to pick up. After a diving save from Phelps, she appeared to hold her head, as she had been kicked by either Prell or Urteaga. Phelps walked off the field, with Sample ready to replace her in goal.

The majority of the game stayed tied at 2-2. Both Team Blue and Team White had many chances and plays to get a goal but were unable to finish.

For Team White, Breslin and Garrison both had multiple opportunities to put another goal on the board, though many of the shots either went over the goal or were blocked or saved.

Breslin’s quick feet were able to get her out of tight situations to start plays, but there wasn’t a goal to show for her efforts.

Another injury happened in the second half to freshman defender Joanna Verzosa-Dolezal. She looked to have been struggling for several minutes before coming off the field for the remainder of the game, causing Team Blue to play the final 13 minutes with only 10 women on the field.

In the 86th minute, Garrison scored the winning goal, breaking the deadlock between the two teams. Eichenbaum sent in a low cross into the box and Cili blocked it, though she was unable to get ahold of the ball. After a scrambled clearance from the defenders, the ball fell to Garrison’s feet, and she tapped it in for the rebound to get the winning goal for Team White, earning her the Woman of the Match award.

“It was super exciting, it was my first goal since I’ve been here (at Illinois),” Garrison said. “It was exciting to play with my teammates and score for my team. I think we were working really, really, really hard the second half as a team, and we got so many chances on goal but just couldn’t put it in.”

“They don’t quit, they don’t give up and they find a way to score a goal and get back in it,” Rayfield said. “You give them a lot of credit, and that’s an experience that group of players can take into a real regular season. I think learning that response, that’s different from what happened two weeks ago gives growth for the players on that team. That’s exactly the reason why we’re doing these games on Friday nights.”