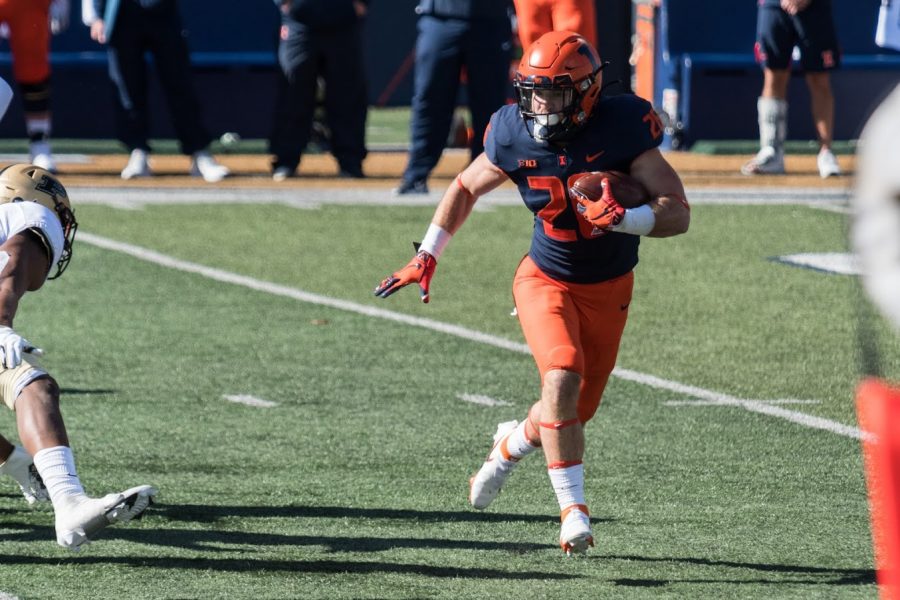 Illinois running back Mike Epstein sweeps left during the game against Purdue on Oct. 31. The Illini fell to the Boilermakers 31-24.

Over the weekend, Illinois football fell to 0-2 after the game-tying touchdown came just eight yards short as Purdue won in Champaign 31-24. Illinois, led by fourth-string quarterback Coran Taylor, put up a decent offensive fight that was completely opposite of its week one loss. However, the defense was unable to stop the pass again, letting up 376 passing yards and only forcing six incompletions.

The Illini’s turnover trouble, two interceptions and two fumbles lost, seemed to be the biggest thing that put them down in the first place, forcing them into a 31-10 deficit to start the fourth quarter.

Around an hour before the game, the team announced 14 players were out following the positive COVID-19 tests of senior quarterback Brandon Peters and redshirt freshman tight end Griffin Moore. The team did not specify who of the 14 were out because of contact tracing protocols and who were out with other injuries.

This left the Illini with their third-string quarterback, Matt Robinson, who had a promising first drive but was injured scrambling on the last play of the drive. Taylor then stepped in as quarterback for the remainder of the game.

This section is for shout outs to the players that had notable performances.

The junior lineman, who usually plays guard, moved to center today as Doug Kramer was one of the 14 players out on Saturday. He played well as usual.

Caleb Griffin stepped up for the Illini as senior kicker James McCourt was out on Saturday and had a field goal made and went 3/3 on extra points.

Another good game for senior Blake Hayes, the Big Ten’s best punter. What more can you say?

The Illini offense was inconsistent on Saturday, but that is an upgrade from its almost non-existent display against the Badgers. While the offense was able to put drives together, the same thing that seemingly saved them on defense, turnovers, killed them on offense. Taylor had two interceptions, one on a throw that was behind his receiver, and one on a ball too high for his receiver. The interceptions put them in bad positions by stopping drives and giving Purdue a great position to score.

Despite the turnovers, that totaled four, the Illini offense looked good. Behind Taylor, who passed for 273 yards, the offense looked dynamic. A lot of option plays, rollouts and scrambles opened up a lot downfield for Taylor, who was able to hit a lot of throws.

The run game looked solid throughout the game as Chase Brown and Mike Epstein combined for 136 yards and a touchdown. Taylor led the game in carries with 17 and had some good runs, but also took some big sacks.

Illinois’ defensive struggles picked up exactly where they were left week one against Wisconsin. Purdue’s first drive on offense was for five plays and 80 yards. It only took Purdue just under a minute and a half to slice through the Illini defense, through the air and with the run.

The Purdue passing attack ended with 371 yards and two touchdowns, and O’Connell only had six incompletions. This comes after Wisconsin quarterback Graham Mertz only missed one throw last week. For some reason, Illinois’ defense can not force incompletions.

Aidan O’Connell found holes in the defense all afternoon as the secondary had no answer for quarterback play in the second straight week. Even when the Illini got to receivers, missed tackles were another problem.

Nothing was more telling of the secondary than when the Illini needed a stop on 3rd and 11 to keep their comeback hopes alive and let Purdue convert the first down to seal the game.

The bright spot on the defense, for the second week in a row, was the defensive line. The position group had a lot of question marks entering the season, but so far they have exceeded expectations and been the best part of the Illini defense.

Owen Carney Jr. had a great day with three sacks and a forced fumble, and the rest of the line limited Purdue to under 100 total rushing yards.

On Wednesday, before the Illini found out they would be without Peters and redshirt freshman quarterback Isaiah Williams, Taylor might not have thought he was going to play on Saturday. But his mindset was the same:“Be ready so you don’t have to get ready.”

Grading Taylor is hard, but as a fourth-string quarterback, he did well. He had some missteps with his two interceptions and fumbles, but he led the team to a comeback chance, scoring two touchdowns in the fourth quarter and coming close to a third.

Junior offensive lineman Kendrick Green, who played with Taylor in high school, summed up how he felt about Taylor’s performance: “As far as I’m concerned, he gave us a chance.”

Taylor’s decision-making at times was bad. However, as Taylor learns to take care of the ball with another week of practice and film review, he could be a good option for the Illini at quarterback as Peters will be out for the next two games at least.

Inconsistency usually grounds for a “C” grade, but because he almost led the comeback and made me laugh in the post-game press conference, he gets a “B-”.

Breakfast was solid with a burrito and fruit cup, but the highlight was and always is the cold brew. Lunch was a little underwhelming as the hot dogs’ buns were a little hard, but the giant cookie was an appreciated touch.

While the sun shining into the press box made it feel like it was August, the temperature was nice after the sun moved behind the stadium. The music selection in Memorial Stadium was a little repetitive but nice. Listening to “Crunk Ain’t Dead” by Duke Deuce four times throughout the game really made my Saturday special.