Without improvements, Illini are in for a long season 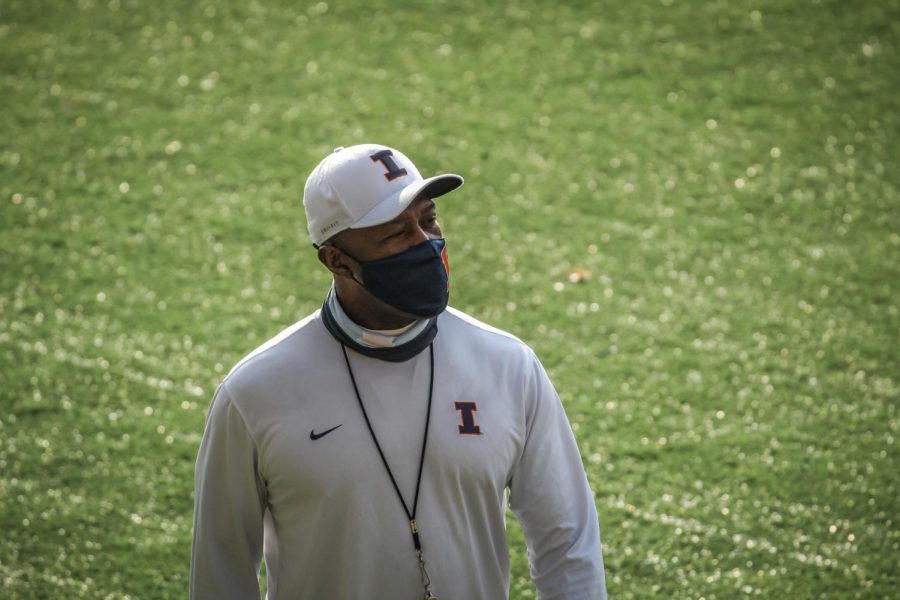 Illinois head coach Lovie Smith gives instructions during practice on Oct. 12. The Illini’s game against Ohio State on Saturday has been canceled due to positive COVID-19 tests within Ohio State’s program.

After Saturday afternoon’s comeback fell short, the Illini sit at a bleak 0-2. With a depleted quarterback room, little depth on the offensive line and fundamental issues in the secondary, the odds of Illinois coming out of the 2020 season without a win are increasing by the day.

A home-opener against the Boilermakers, a team the Illini handled just a season ago, was supposed to be a surefire win. Obviously, having to play a fourth-string quarterback changes that surefire win status, but it isn’t an excuse when the Boilermakers gave the Illini every chance to win down the stretch. There’s enough talent on the roster to make up for the quarterback position.

Yes, the Big Ten football season is just two games in. We saw Lovie Smith’s team fall into a hole with four-straight early losses last year and still end up in the team’s first bowl game since 2014. But this season feels different.

Most other Big Ten teams are improving. Northwestern, Purdue and Indiana all sit comfortably at 2-0 when last year the Wildcats finished 1-8 and the Boilermakers finished 3-6, both teams at the bottom of the conference. After ending the season in dead last, Rutgers looks solid at 1-1 after putting up 38 points against Michigan State in Week One. Maryland, a one-win team in 2019, also sits at 1-1 after upsetting Minnesota this weekend.

Illinois isn’t in the same boat; there hasn’t been progression, but instead regression. Against Wisconsin, senior quarterback Brandon Peters looked flat and had tunnel vision for senior wide receiver Josh Imatorbhebhe, who has dropped several passes in the first two games. The run game hasn’t been completely established; it was more efficient against Purdue than Wisconsin, but running backs junior Mike Epstein and sophomore Chase Brown need more consistency.

The defense has given up 76 points in just two weeks. Wisconsin and Purdue’s Quarterbacks Graham Mertz and Aidan O’Connell are talented, but they shouldn’t be carving up a veteran Illinois secondary. Blown coverages have led to quick touchdown passes and holes left open in the middle of the field have caused smooth-sailing, efficient drives for Wisconsin and Purdue.

All of these things should be fixed and improved in year five of Smith’s tenure, but they’re not. Which is why I’m not sure the Illini will win more than one, maybe two games this season.

Looking at the rest of the schedule, Illinois needs to improve in every area of the game, most importantly on defense, to come out of 2020 with something in the win column.

Next week, Illinois hosts a surprisingly winless Minnesota. But Minnesota has still been able to put plenty of points on the board. They are being led by running back Mohamed Ibrahim who has rushed for 347 yards and six touchdowns in the first two weeks, while quarterback Tanner Morgan hasn’t been as impressive, putting up just 386 yards and two touchdowns through two games.

Rutgers and Nebraska are both unproven teams but have solid foundations and can put points up. Then, Illinois has to host one of the top programs in the country, Ohio State, which speaks for itself. Illinois then wraps the regular season up with Iowa, who Illinois consistently struggles against, and Northwestern, who beat a depleted Illinois team at the end of last season.

I would like to think Northwestern, Nebraska and Rutgers could all be wins for Illinois, but not without massive improvements from both the players and the coaching staff. Either way, Illinois could be in for a brutal 2020 season, and we might have to restart the conversations about Lovie being on the hot seat.