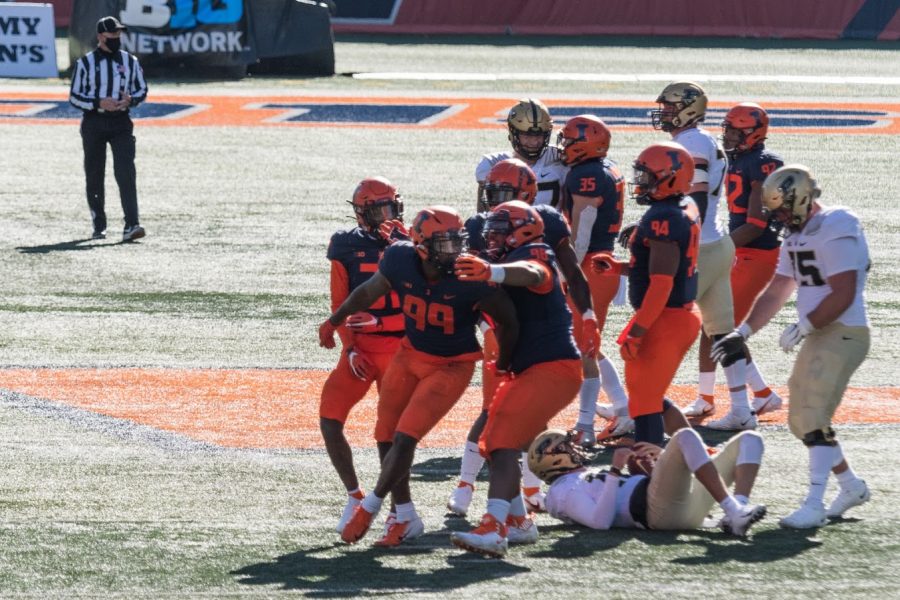 Illinois defensive lineman Owen Carney Jr. celebrates a sack during the game against Purdue on Oct. 31. The Illini fell to the Boilermakers 31-24.

In what has been a disappointing effort thus far into the 2020 season for the Illinois defense, one bright spot has emerged: the defensive line. Though they were expected to provide the least amount of production and the main question regarding the defense coming in, the D-line has come up with big plays and contributed the most for the Illini so far this season.

With the Illini secondary already giving up big scoring plays and not yet playing the way they have been expected to, the defensive line has been able to keep the defense in games by coming up big in key moments, especially in game two.

“I feel like our D-line is very disruptive,” said senior defensive tackle Owen Carney. “I feel like we cause a lot of havoc, and I feel like we’re up there as far as the potential that we have where we’re at right now.”

Against Purdue on Saturday, the Illini were able to hold Boilermaker rushers to only 85 combined yards and one touchdown, the lone score coming from junior Zander Horvath, who rushed for 129 yards the week before. With multiple blown coverages by the secondary, stopping the run game was crucial to keeping Illinois in the game.

“I thought we did some things better, ya know, we played the run fairly well the last couple games,” said head coach Lovie Smith.

It was the big plays that kept Illinois moving against Purdue, and Carney was in the middle of it. He recorded three sacks on the day and six total tackles, and after playing on the line since his freshman season, Carney finally played the way his coach had been expecting him to.

“He had the best game of his career so far,” Smith said. “He’s smart, he’s got size, he’s got speed, he hadn’t been able to put it all together, but he was involved and made plays this past week.”

Carney made plays that gave the offense a better chance to score and brought momentum to the team, but the senior also cost the defense on multiple occasions.

Three penalties by the defensive tackle were able to provide the Boilermakers with better field position and additional chances to score, and despite his three sacks, Carney knows he must still improve his consistency.

“I felt like I did a lot of great things Saturday morning, but I also made a lot of mistakes and I left a lot of key plays on the field,” Carney said. “People said I had a good game, three sacks, yeah, whatever. I also had three penalties, and I could have had more sacks and more (tackles for loss) too. … I’m really not feeling so much shine, really I’m trying to correct those errors that I made so I can become a better player.”

Another player that has stepped up on the defensive line is freshman Jer’zhan Newton, who was able to get more minutes due to senior Jamal Woods missing Saturday’s game.

Newton was able to force a Purdue fumble on the goal line which the Illini recovered, a key play that kept Illinois in the game. Having stepped in for a senior, his head coach was more than pleased with his performance.

“We like everything he’s done since he’s been on campus, and if Jamal Woods can’t go this week, we feel comfortable with (Newton) playing,” Smith said.

The defensive line also made a stop on fourth and goal that prevented the Boilermakers from taking a three-touchdown lead.

Senior linebacker Jake Hansen lines up right behind the defensive line and was healthy for the whole game against Purdue. He recovered the fumble Newton caused on the goal line and said the way the line has been playing has made life easier on him.

“Real good players, they’re taking up gaps and playing really well for us. They’re big-time players for sure,” Hansen said. “An effective pass rush gets the ball out quicker every time and it makes the coverage a lot easier.”

Despite a great performance this past Saturday, the road will only get tougher, with a Minnesota team with a strong offensive line protecting an accurate quarterback coming to town next weekend.

The team has had great moments so far, but Carney says there’s still a lot of work to do. The team is still getting used to playing with different rotations, but for them, time will make for better play.

“Everything’s new for us, we’re learning in-game, in practice and we’re making adjustments on the fly,” Carney said. “We’re all starting to mesh together as the season progresses on.”