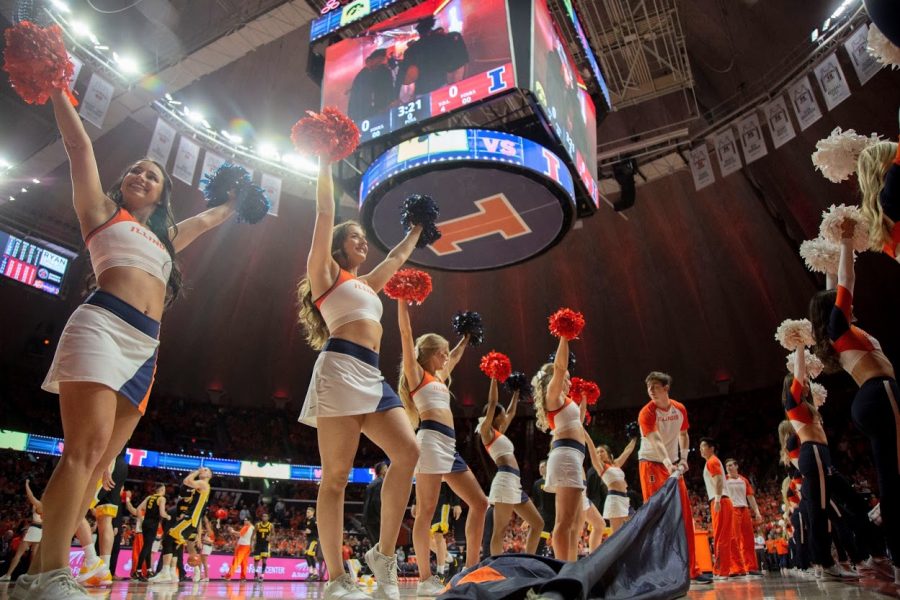 The Illinois cheer team performs at the basketball game against Iowa on March 3.

At Illinois football’s home opener on Saturday, Memorial Stadium was close to empty. Photographers, videographers and players’ families made up the near 1,000-person crowd in the stands. Athletes and select staff from Illinois and Purdue lined the sidelines.

But the group that builds the gameday atmosphere was missing — the Illini cheer team.

“That very start when we run the team out, when the team goes through the tunnel and you see that first helmet and then we run the flags; that’s the best feeling.” said junior cheer captain Cam Conklin. “The crowd is going crazy, the music is going. It’s such an adrenaline rush.”

That moment of hype on Saturday was replaced with pumped-in crowd noise, faint cheers from the football players and pre-recorded videos on the jumbotron.

With only their cardboard cutouts in the stands, the cheer team watched Illinois fall in its home opener from their college dorms or apartments.

“This is a first for me,” said Illini cheerleading coach Stephanie Record. “This is my first time in 27 years I haven’t been at the home opener coaching. It was pretty surreal. I’ve never seen anything like it.”

While the cheer team won’t be attending football or basketball games for the foreseeable future, their training has only been limited, but not stopped.

In a typical year, the team holds three-hour practices three times a week and team workouts twice a week starting in July up until basketball season starts when they move to twice-weekly practices.

This year, after ending all activities in March when the COVID-19 pandemic surged, Record couldn’t bring her 34-person team back together until Sept. 29, and the team can only hold one three-hour practice per week while workouts have to be completed independently.

“In the past, it was multiple practices and lifting and we were always together, especially right now in November when we’d be doing football and basketball,” said senior captain Maddie Bolser. “However, I think that does make it more exciting to actually get to go into practice and finally be around each other. It just makes you a lot more appreciative of when we do get to be together.

“It kind of made me realize how much stuff I did take for granted when everything was normal.”

In-practice protocols have also made it difficult for the team to bond. After going through temperature checks and a wellness screening reviewed by a team trainer, the athletes break off into four groups of six to 10 people, spread out in the gym of Huff Hall.

But, that one chance a week the group gets to be together has been enough to keep Record’s team staying motivated and positive.

“We’re limited on what we can do, but keeping them connected and building those relationships has been a motivating thing for sure,” Record said. “It’s easier to do something hard when you’re in a group of people doing it together.”

While the Big Ten’s decision to not allow cheer or band in the football stadiums on game day was made across the board, the conference has left it up to individual programs to determine practice capabilities.

With the pandemic not slowing down and testing not widely-available at most Big Ten universities, the majority of programs in the conference aren’t meeting or practicing at all. Record said she feels blessed Illinois’ athletic department has placed such a high value on her program.

“We’re just really thankful because Illinois is letting us, as a cheer team, do so much more than other Big Ten schools,” Bolser said. “Even when I kind of start to get a little down that we aren’t out there cheering on game day, at least we’re getting to do something and I’m really grateful for that.”

While getting to cheer at any games in 2020 seems unlikely, Record said the team’s continued training will have them ready whenever the green light comes.

Until then, the Illini football and basketball teams will continue to be without their number one supporters.

“Our sports teams have had their ups and downs, but one thing cheer brings is we’re there from start to finish,” Record said. “We’re definitely there to lead the crowd and cheer with the crowd and get them yelling and doing things, but if we’re not winning, the crowd’s not doing that. So, we’re the ones who kind of step up and support regardless.

“I think unconditional support for our athletes is huge, and I think they appreciate it.”