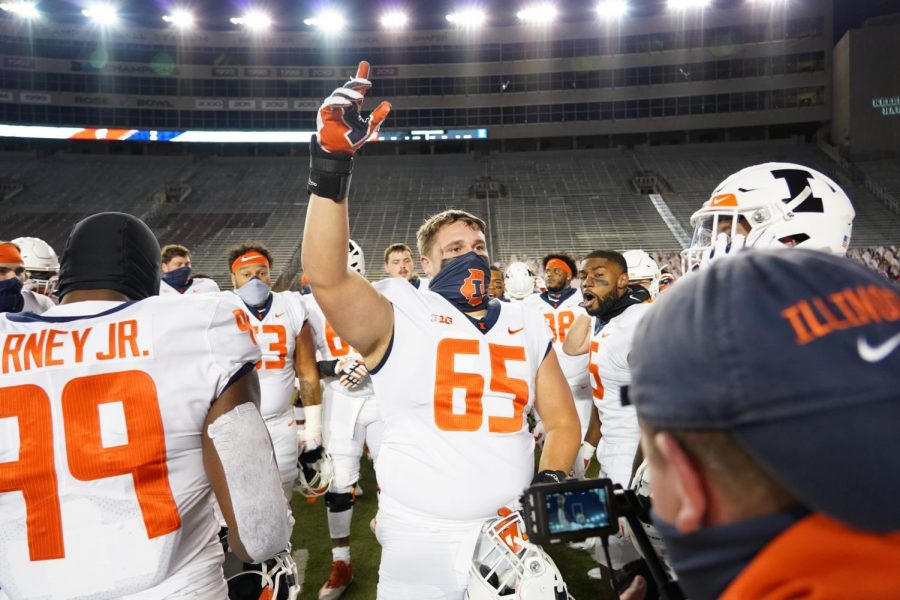 Illinois team members stand in Camp Randall stadium while wearing masks before the game against Wisconsin on Oct. 23. The Illini fell 45-7 in the season opener.

Wisconsin’s dominant 45-7 win over Illinois should have been the storyline of the opening weekend of Big Ten football’s return. After Wisconsin’s starting quarterback Jack Coan suffered a foot injury prior to the game, redshirt freshman Graham Mertz stepped in and dominated, throwing five touchdowns in the victory. The win sent shock waves through the Big Ten, and Wisconsin jumped five spots in the AP poll to No. 9.

Three days later, head coach Paul Chryst tested positive, one of 12 total cases within the Wisconsin football program, and the team was forced to cancel their week two matchup with Nebraska.

As of Tuesday, there are now 27 total active cases within the Wisconsin program, including 15 student-athletes and 12 staff members. The team canceled its game for the second week in a row, forcing 2-0 Purdue to lose its steam and momentum and take the week off.

Those cancellations may not directly affect the Illini’s schedule, but three positive cases within the program, along with many others who have been sidelined due to contact tracing, could potentially cause uncertainty if the number of positive diagnoses continues to rise.

The two confirmed cases are senior quarterback Brandon Peters and redshirt freshman tight end Griffin Moore, though head coach Lovie Smith says both players have “no symptoms really.” One player tested positive prior to Peters and Moore, though this player remains unknown.

Smith also announced the team would continue to be short-handed for this weekend’s game against Minnesota, as all players who test positive must sit out for 21 days.

“We don’t have a whole lot of positives, but we have enough through contact tracing to wound our team a little bit,” Smith said. “The guys who were out this past week will be out this week also.”

As of now, Illinois’ game against Minnesota will take place on Saturday at 2:30 p.m. at Memorial Stadium.