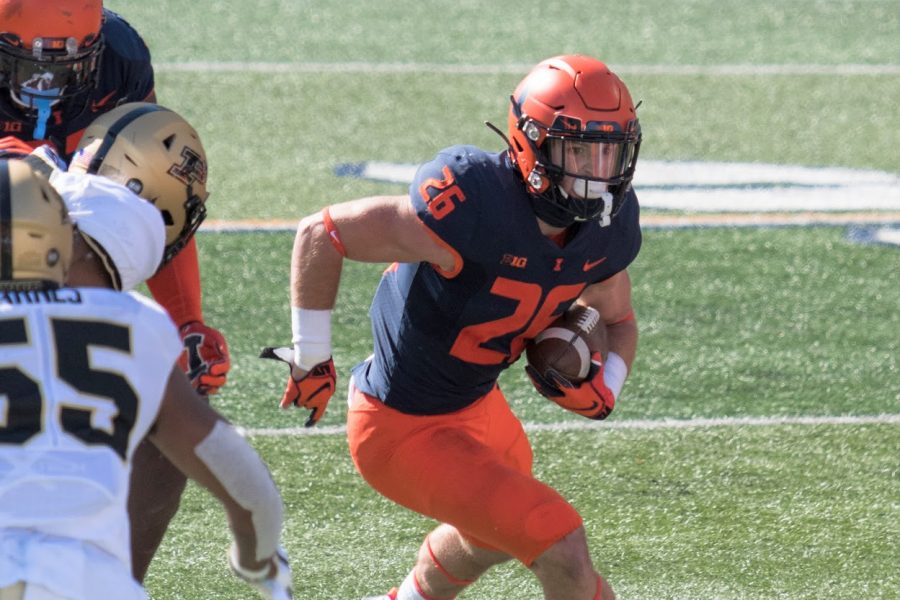 Illinois running back Mike Epstein searches for an opening during the game against Purdue on Saturday. The Illini fell to the Boilermakers 31-24.

In what will be a battle of two winless teams, Illinois is set to host Minnesota on Saturday afternoon at 2:30 p.m.

Last year, the Illini traveled to Minneapolis to take on the Golden Gophers and were defeated by a score of 40-17.

Illinois is coming off a home game against Purdue, where the team missed many key pieces due to coronavirus-related issues. Fourth-string quarterback Coran Taylor played the majority of the game for the Illini, and the Boilermakers won the game 31-24.

Minnesota traveled to Maryland last week, losing in overtime to the Terrapins 45-44. The Golden Gophers scored a touchdown in overtime but lost the game on a missed extra point.

Contact tracing forced at least six more players for the Illini to sit out, including senior center Doug Kramer, senior kicker James McCourt and redshirt freshman quarterback Isaiah Williams. They began a 10-day absence and will also be out this week against Minnesota. Head coach Lovie Smith said there have been no new tests to report.

“No more positive tests for us,” Smith said earlier this week. “We test every morning, we’ll continue to talk with our guys about social distancing, washing their hands. … We have been good throughout.”

Shorthanded again, the Illini will be on to their third-string quarterback for the second week in a row. It is unclear whether redshirt sophomore Matt Robinson will start his second straight game, or if sophomore Coran Taylor will get the nod after coming in for an injured Robinson after one drive.

Taylor was responsible for four Illinois turnovers against Purdue in his first real minutes as an Illinois quarterback, but despite the turnovers, he was impressive, finishing with over 300 combined yards and two passing touchdowns.

Whether it’s Taylor or Robinson starting the game for the Illini, they’ll need a more impressive showing than they have had their first two games to defeat a strong Minnesota defense. Despite giving up 45 points last week at Maryland, offensive coordinator Rod Smith knows the Golden Gophers are going to make it tough on the Illini.

“We’ll get their best shot,” Rod said. “We know that. They’ve suffered two losses just like we have.”

A key to Illinois’ offense this week may be getting the run game more involved. Junior Mike Epstein scored the first touchdown of the year for the Illini offense against Purdue, but the duo of Epstein and sophomore Chase Brown hasn’t been as effective as some thought they would be heading into the year.

After combining for only 48 yards against Wisconsin, Epstein and Brown totaled 63 and 73 rushing yards, respectively, against Purdue. Despite the improvement from week one, Rod says he plans on getting the duo more involved come this Saturday.

“Our guys, I thought we did a pretty good job of running the football, much better than we did before,” Rod said. “There’s still another level we can get to. In my opinion, we left a lot of plays out on the field.”

Defensively, Illinois will be going against a Minnesota offense with multiple high-level players. Junior quarterback Tanner Morgan is one of the most accurate quarterbacks in the conference and has an outstanding receiver in junior Rashod Bateman to throw to as well.

Junior running back Mohamed Ibrahim ran for 207 yards and four touchdowns last week at Maryland and will be important for the Illini defensive line to contain.

“Bateman is back, one of the best receivers in the game,” Lovie said. “Tanner Morgan is back, you know, outstanding quarterback. So you start with that and those guys. Running back has played outstanding ball this year. … If you just look at what they’ve done offensively both games, they’ve really played a really good offense.”

With both teams sitting at 0-2 on the year, the Golden Gophers and the Illini are hungry to get in the win column. Illinois knows its hands will be full against a high-scoring Minnesota offense, and Lovie expressed the importance of his team coming away with a win on Saturday.

“We’re playing all division conference games,” Lovie said. “You want to win every one of those. We don’t have a win and we’ve played two. It’s a game we need to win. We’re going to do everything possible to win.”