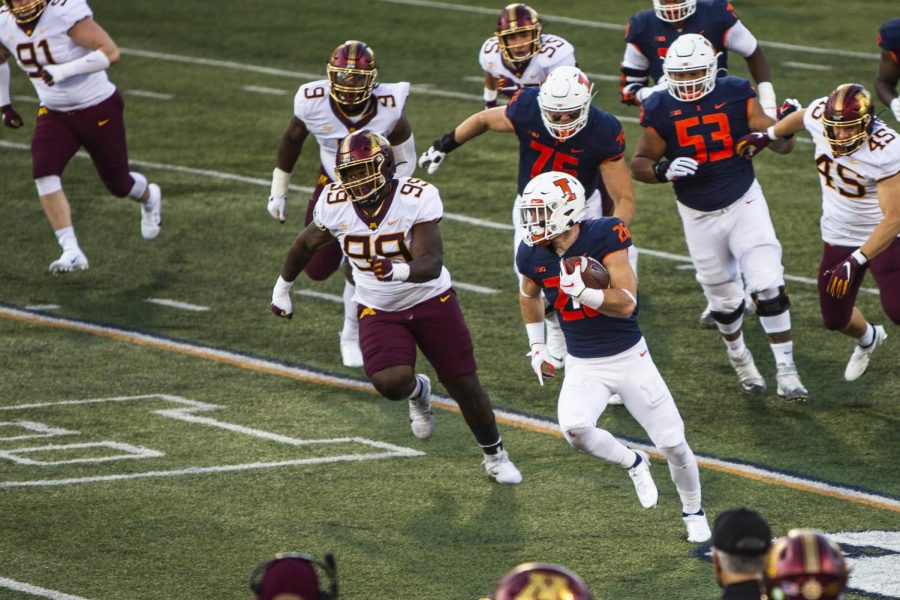 Junior Mike Epstein runs the ball down the field in Illinois’ game against Minnesota on Saturday evening. The Illini lost to the Gophers 41-14.

Once again plagued with injuries and absences, Illinois was short-handed in Saturday’s loss to Minnesota. In what was expected to be the best of five Lovie Smith teams so far, the Illini are now 0-3 after getting blown out by the Golden Gophers, losing 41-14 at Memorial Stadium.

“As you can imagine, (I’m) just beyond disappointed in the way we played today,” head coach Lovie Smith said after the game. “Terrible performance.”

All players with COVID-19 related issues missed their second straight game, and the Illini were also without defensive backs Nate Hobbs and Marquez Beason, as well as quarterback Matt Robinson.

Coran Taylor started the first game of his career for the Illini after playing all but one drive against Purdue.

Arriving at 0-2, Minnesota came into Champaign and controlled the game almost immediately. Despite punting and fumbling on their first two drives, the Golden Gophers followed by scoring on their next four, tallying 270 yards of offense in the first half.

Minnesota gave up a combined 96 points and had only allowed two punts all year in its two first two games this year, but looked like a whole new defense on Saturday. Illinois punted on four of its first five drives, was only able to record 140 total yards of offense in the first half and put up just seven points, the lone score coming on a Mike Epstein touchdown run.

One bright spot for the Illini on the day was the running game, as many expected Rod Smith and the offense to get Epstein and Chase Brown more involved. The duo combined for 139 yards and Epstein’s touchdown was his second score of the year.

“Mike Epstein had some big runs, I think Chase had a couple big runs also,” Smith said. “We would have a big run and get in position and then we start going back another direction, but we have a commitment to the run and we’ll need to get it going even more.”

The second half began with a promising drive for the Illini full of Taylor and Brown runs, but after getting up to the Minnesota ten yard line for a first and goal, Taylor fumbled the ball and Illinois lost 38 yards. The Illini punted the ball away on fourth and goal from the 48 to the Minnesota 11, a yard behind where they started the set of downs.

After a third touchdown on the day for Ibrahim and another Blake Hayes punt, Devon  Witherspoon picked off Tanner Morgan for Illinois’ first interception of the season.

The Illini were able to capitalize on the turnover when Taylor found Josh Imatorbhebhe for a 52-yard touchdown, the senior’s first score of the year.

That would be the final score of the day for Illinois, who finished with just 287 total yards.

The interception was one of two Illinois takeaways on the day, the other being a forced fumble by Jake Hansen in the first quarter. The team aims for at least three turnovers each week, and although Illinois won the turnover margin today, the team still isn’t pleased with the amount that they have forced or the defense’s performance as a whole.

“It still wasn’t good enough… We need to get three and even if we got three I don’t think it really made that big of a difference this game because we got out-physical as bad as we did,” Hansen said.

After two impressive weeks in a row, the Illini defensive line wasn’t able to handle Ibriham all afternoon and gave up 325 total rushing yards to Minnesota

“He’s a good running back, it’s kind of as simple as that,” Smith said. “Our tackling was really bad today too… Everything that could have gone wrong as far as playing the run actually went wrong today. He had a great day running the ball and their offensive line did a super job blocking.”

Penalties were one of the biggest problems on the day for Illinois, recording 12 for 120 yards. These cut down multiple promising Illini drives and gave Minnesota good field position all game.

“This isn’t something that’s happened an awful lot to us, we normally have a lot more discipline than we had today,” Smith said. “Like everything, we’ll correct it and hopefully not be in this situation again.”

Illinois is expected to return at least six players that were out for two weeks due to contact tracing next week at Rutgers, barring a positive test. The Illini will take on the Scarlett Knights in Piscataway, New Jersey looking for their first win of the year.

Disappointed in the way he coached, Lovie Smith said he takes responsibility for his team’s performance in today’s game. He knows that everyone on the team is at fault for this performance, but that it falls on him to make sure the team will get better to succeed in the future.

“I’m the head football coach,” Smith said. “Everything comes back to me. It goes back to our leaders too who have been around for a period of time. And everybody else that played out there to today. It’s on all of us, it always starts with me. And believe me, we’ll do something about it.”