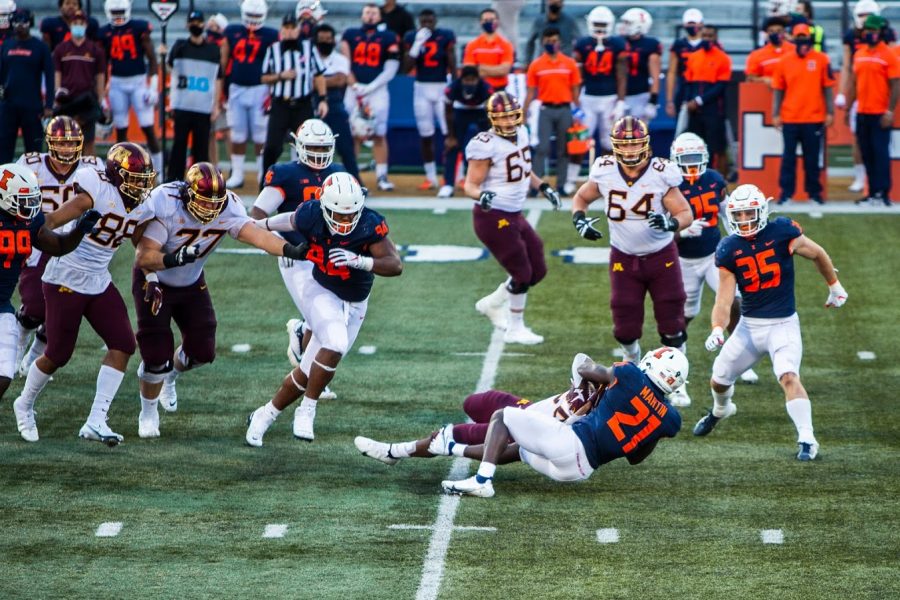 Junior defensive back Jartavius Martin tackles a Minnesota player during the game against Minnesota at Memorial Stadium on Saturday. The Illini lost the game 41-14.

After a bowl appearance in the 2019 season, Illinois football is off to a 0-3 start. The third loss of the season came on Saturday night when Minnesota came to Memorial Stadium and beat Illinois 41-14. The Illinois run defense could do almost nothing as they allowed 325 net rushing yards against them.

After the game, head coach Lovie Smith said there was a lot of football left to be played. But in this eight-game regular season, time is running out for the team to show something similar to what they did last year.

A .500 record would require the Illini to go 4-1 in their next five games, which seems unlikely against teams like Ohio State, Iowa, Nebraska and undefeated Northwestern.

Throughout three weeks, grading this team offensively has been a struggle. In week one, the offense was virtually non-existent with 87 passing yards, 131 rushing yards (75 from Brandon Peters) and no offensive points. In week two, the offense looked completely different. A new quarterback, a bunch of yards, a few touchdowns and a lot of turnovers.

Week three brought more offensive stagnation and confusion. Illinois seemed like it would put something together on the first offensive drive out of half time as the team got into the red-zone. But after a penalty and a long fumble recovered by the Illini, they faced a third-and-goal from the 48-yard line. They then punted on fourth-and-goal. While this is rare, it turns out Oklahoma did a similar thing just last season, which makes me feel a little bit better about the situation.

The offense has looked really different in the first three weeks. With Brandon Peters out for at least one more game and a quarterback battle brewing as Isaiah Williams could be eligible to return if he doesn’t test positive for COVID-19, week four could look just as different. In a season with only eight games, no team can afford that.

Bottom of the Big Ten

After this game, the Illini dropped to 0-3 for the first time since the 1997 season, where it finished the season 0-11. Illinois, Penn State (0-3) and Nebraska (0-2) remain the only winless teams in the Big Ten after the third week. This record is undoubtedly disappointing for a team that finished 6-7 last year, especially as the conference is experiencing a shift in success, with Northwestern rising to the top and Iowa and Penn State dropping a few tiers.

Hansen Rising in the Record Book

Illinois’ resident fumble specialist, linebacker Jake Hansen, forced another fumble today taking his career total to 10. The strip was his second of the season and pushed him up to a tie for third place with Stanley Green. Whitney Mercilus (11 FF) and Simeon Rice (13 FF) are the players above him.

Last week, Coran Taylor deserved some slack. He was coming in as the fourth-string quarterback with little experience and threw for two touchdowns and almost 300 yards. This week, however, Taylor threw for 6-17, 106 yards and one touchdown that came on a 52-yard pass to Josh Imatorbhebhe. Other than that, there was not a lot of production. Some of it can be put on Taylor and his inability to make the passes, but penalties were a huge factor in the lack of production. There were nine penalties on the Illinois offense for 82 yards. Some of the penalties came at bad times where Illinois would have had productive plays.

While it shows progress that Taylor didn’t turn the ball over today, it is worth mentioning there were at least two passes that could have been intercepted by the Minnesota defense.

One bright side of the offense was the running game. Mike Epstein rushed for 108 yards, a touchdown and broke one run for 63 yards. It was his first 100-yard performance since 2018.

One thing is for sure though: Illinois needs to find a way to convert first downs and keep drives alive. Illinois walked away with only 14 first downs in the game and was forced to punt eight times.

For the first time this year, it seemed like the front seven and the run defense did worse than the secondary. Minnesota running back Mohamed Ibrahim rushed for 224 yards, just seven yards shy of what Tanner Morgan had passing.

Ibrahim, who leads the Big Ten in rushing with 571 yards, recorded his second consecutive 200-yard rushing game of the year.

The run stop wasn’t there on the defensive line, but the second level provided no help either as missed tackles were a theme.

The Minnesota offense came out passing and driving, but Illinois was able to get two stops on Minnesota’s first two drives. Minnesota then went on to score touchdowns on its next four drives.

The secondary, which has been bad in the first two games, played a little better today. They didn’t get beat for a long touchdown pass for the first time this season, which looked to be a focal point as comeback routes were used heavily by Minnesota, and Illinois allowed it. The team was also without their two cornerbacks, Nate Hobbs and Marquez Beason, who were out with injuries today.

Tanner Morgan and his passing offense were less aggressive in the second half as they had already built a lead. In the second half, Minnesota relied on Ibrahim to deliver the win, which is what he did.