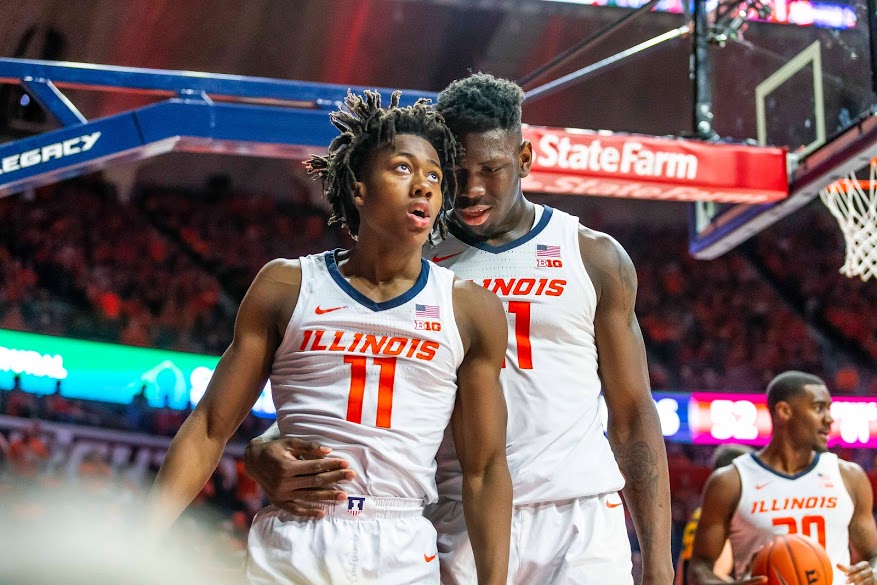 Freshman Kofi Cockburn embraces Sophomore Ayo Dosunmu during the match against Iowa at State Farm Center in Champaign, Illinois on Sunday, March 8..The Illini are ranked No. 8 in the preseason AP Top 5 Poll.

After finishing last season at No. 21 in the final Associated Press poll, Illinois enters the 2020-2021 season at No. 8, the third-highest ranking among Big Ten teams. This is the first time since 2011 that the Illini have been ranked entering the season, while the program has not started the year in the top 10 since 2004.

Ever since junior guard Ayo Dosunmu and sophomore center Kofi Cockburn announced their returns to Champaign, the hype for this season’s Illini team has been immense, with comparisons frequently made between this squad and the 2004-2005 Illini team that made it all the way to the national championship. After the team’s promising postseason was canceled due to the COVID-19 pandemic, the expectations for a deep run in the Big Ten and NCAA tournaments are sky-high.

Cockburn and Dosunmu were also named to the Preseason All-Big Ten team, with the latter nominated unanimously.