Column: What happened to the best team of the Lovie Smith era? 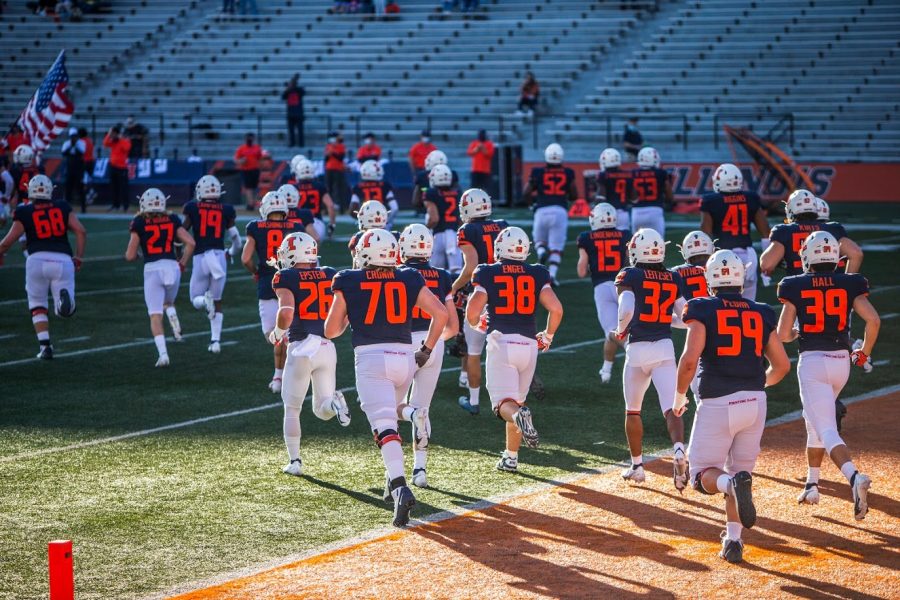 The Illinois football team takes the field before the game against Minnesota on Saturday. Illinois fell 41-14 and struggled to count on Minnesota running back Mohamed Ibrahim.

Another week, another “we can’t wait to get to the next week” statement from Illinois head coach Lovie Smith. While the Big Ten college football season is only three weeks in, that phrase is already getting old and repetitive.

“We stunk up the place today,” Smith said. “We didn’t play well today. The only option we have is to get to the next game. Have we said that before and it happened? Yeah. We’re gonna say it again right now. Today’s effort, the way we played wasn’t good enough and the only way you can get this bad taste out of your mouth is to get to the next game.”

But “new week, same result” is the phrase that seems the most appropriate following three straight losses to open up Illinois’ 2020 season. In fact, the Illini are on a six-game losing streak dating back to the 2019 loss against Iowa.

Illinois has not won a football game in exactly 365 days.

Let that sink in, because it definitely took me a minute. Just a little over a year ago, Illinois and its fans were riding the high of a three-game win streak that gave the team bowl eligibility. A nation-shocking upset against Wisconsin, a convincing win against Rutgers and an unreal comeback victory at Michigan State made for an exciting three weeks that were full of hope.

“We’re so much better than this,” said junior running back Mike Epstein. “We’re 0-3 right now and that’s our record, there’s no hiding that. But, we’re just a lot better team than what we’ve been putting out, and it’s just frustrating because we put a lot of work in to have this team. It’s disappointing when we’re so excited about this year and we’re off to a slow start.”

Obviously, the players and the coaches have to believe in themselves, and I respect that. They’ve had a long, grueling offseason full of confusion, waiting to get the green light to play. But back in September, Smith claimed the extra practice time had his team “farther along” than normal years.

“We all talk about this should be our best football team based on who we have and what we’ve seen from the guys daily,” Smith said back in September.

I, like most Illinois media members and Illini nation, bought what Smith was selling. I truly believed this was Smith’s best squad, that there was immense talent on offense and the defense had progressed to be competitive, especially in the secondary.

Boy, was I wrong. In Smith’s fifth year at Illinois, the team has been outscored 117-45 through three weeks. For those of you who are bad at math, that’s a 72-point differential. 72 points.

It’s hard to even dissect that. The Illini are getting outplayed and outhustled on both sides of the ball time and time again. If you add in the other three losses from last season that have led the six-game losing streak, Illinois has been outscored 200-85, a 115-point differential.

That’s enough math for the day, because that’s just depressing. In year five of the Lovie project, the offense can’t put up points, can’t dominate the line of scrimmage and can’t minimize rookie mistakes. The defense can’t close the gaps, can’t tackle and can’t stay in coverage.

These are fundamental skills that can’t be an issue with a plethora of veteran players on both sides of the ball. And at the end of the day, it comes down to coaching.

“I’m the head football coach,” Smith said. “Everything comes back to me. It goes back to our leaders too who have been around for a period of time. And everybody else that played out there today. It’s on all of us. It always starts with me. And believe me, we’ll do something about it.”

But I think it might be time to go beyond Smith and take a look at athletic director Josh Whitman. At what point will he have had enough? Enough of looking donors, media and fans in the eyes to say something like, “the wins will come, we’re building.”

I understand Whitman wanting to give Smith enough time to try and turn the program around. But it’s been five years. Recruiting is still down, and production is even lower.

It might be too late to salvage this program.