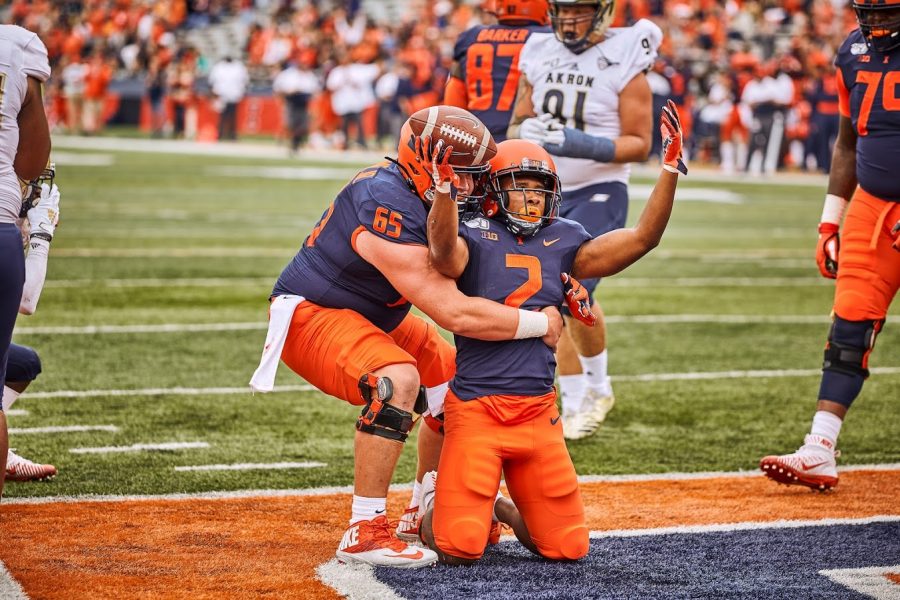 Illinois running back Reggie Corbin (2) and lineman Doug Kramer (65) celebrate after scoring a touchdown against Akron on Aug. 31, 2019. Kramer is set to return to play for the Illini this Saturday.

After missing at least eight players over the last two games due to COVID-19 related issues, the Illini are expected to return at least six athletes that were out due to contact tracing. Not only will these players help fill out the roster, but a number of them have been key difference-makers before missing games for Illinois.

Big Ten protocols state that players out due to contact tracing must miss 10 days of activity, which will allow those players to begin practicing on Wednesday.

“As you can imagine, we’re pretty excited about getting everybody back,” head coach Lovie Smith said Monday afternoon. “Wednesday we will get our quarantine players back… I just know that we’re a better football team with them, and I can’t wait to get them back.”

Each of the players returning is important for the teams’ success, but the Illini will return a senior captain in Doug Kramer to the mix this week. Kramer is known by his teammates as one of the most influential guys not only on the field but in the locker room as well.

Fellow senior captain Brandon Peters is still out, so getting a leader back to the team will be crucial for Illinois moving forward.

“With Doug (Kramer) coming, it settles everyone in,” Smith said. “That’s gonna help a lot. One of our captains, our center… It starts with your center, the guy that makes the calls, does everything, snaps the ball, you start with that.”

Not only does Kramer make an impact for the team as a leader, but he is one of the best players on the field for Illinois each week. With Kramer out for two weeks, it forced redshirt junior Kendrick Green to play center for the Illini for two weeks.

Kramer came into the season ranked by Pro Football Focus as the third-best returning center in the country, and the senior could be a draft pick to the NFL with improvement. His play is key to protecting quarterbacks and offensive coordinator Rod Smith is thrilled to have Kramer back for Saturday’s game.

“He’s an important part of not just the offensive line unit, but of our entire offense, our entire team. Can’t wait to get him back, excited about that. Plus, it allows (Kendrick green) to go back to his guard spot,” Smith said. “Hopefully that will help us become more consistent in what we’re trying to do…. Excited to get him back to try to get some normalcy back.”

Another senior that the Illini will be returning this week is kicker James McCourt. McCourt is someone that the team has relied on in big moments over the past two years and has had multiple memorable moments since becoming the starting kicker as a junior.

Against Purdue, Illinois passed up two potential field-goal opportunities to either punt or elect to go for it on fourth down. The Illini punted from Purdue’s 33-yard line and failed a fourth-down conversion near the red zone rather than electing a field goal attempt without McCourt, but the senior returning to the team will help with decision-making due to his kicking abilities.

“We think he’s one of the better kickers in the Big Ten, I mean he’s got a great leg, have tons of confidence (in him),” Rod Smith said. “We know if we get the ball around the 35-yard line he’s in range. It’s a great position to have in terms of knowing his strength.”

Isaiah Williams is also expected to be a big return for the Illini this week.

Sophomore Coran Taylor played all but one drive against Purdue and started the following week versus Minnesota, but didn’t put up the impressive totals he did in his first game. With a high recruit in Williams coming back to the group, it will leave the coaches with a decision to make for this Saturday’s game.

“His decision-making, his throwing (before being ruled out) was better, you can tell he was just starting to get more comfortable as time went on,” Rod Smith said. “Isaiah, there’s a place for him and you wanna have him touch the ball somehow.”

With three key pieces returning, Illinois should be able to put up better numbers at Rutgers on Saturday. After a 41-14 loss against Minnesota, the Illini will need these players to show their presence to have a chance against an improved Scarlett Knight team.