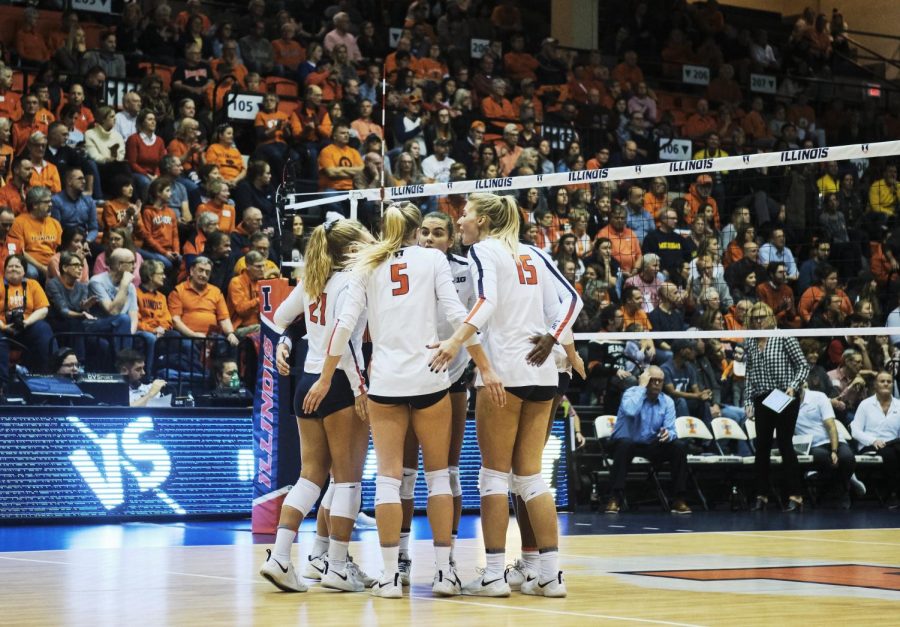 The Illinois volleyball team huddles up in a match against Michigan on Nov. 1, 2019. The volleyball team was one of the many Illinois programs to have players sign National Letters of Intent on Wednesday.

The NCAA’s national signing period for high school athletes of all sports except football began on Nov. 11. Today, dozens of athletes from across the country signed their National Letter of Intent to compete at the University of Illinois.

After committing in mid-April, 2021 wing Luke Goode finalized his pledge to the Illini when he signed on Wednesday. Goode, a four-star, is ranked No. 96 on 247Sports and is the No. 3 player in the state of Indiana. He is currently the sole member of Brad Underwood’s 2021 class.

In Goode, Illinois is getting a player that can play at the two, three or potentially four. Underwood described him as a guy that can do more than just shoot off the catch. He praised his work ethic on the court and in the weight room.

“He’s a perfect fit for our university and our basketball family,” Underwood said. “He’s a guy with tremendous size; that was a priority for us. Our recruiting process was to find a big wing who could really shoot it. He’s got tremendous versatility.”

Illinois is also in the running for 2021 guard Tyty Washington, who will be announcing his decision on Nov. 15. Underwood also said they are waiting for some players who will be committing in the spring.

As of now, head coach Nancy Fahey has signed two players for the 2021 class in Adalia Mckenzie of Brooklyn Park, Minnesota and Keanna Rembert of Raleigh, North Carolina.

Mckenzie is a 5-foot-10 guard who, according to Prep Girls Hoops, is the number one 2021 recruit in Minnesota. Mckenzie plays high school basketball at Park Center High School where she helped her team to the Class 4A tournament last year while earning all-metro and all-state honors. As a junior, she averaged over 30 points per game.

Rembert is a 6-foot-2 forward who plays for Millbrook High School and verbaled to Illinois back in April. In her junior season, Rembert totaled 443 points, 275 rebounds and 67 blocks. She also had offers from Clemson and Georgetown.

“We are all extremely pleased without how our 2021 class has come together,” Perry said. “As you can imagine, there were so many challenges with coronavirus and recruiting being restricted to virtual recruiting, watching players on video…. We have a very stringent list of qualifications that we want with our singing class. One of the main attributes is toughness. I believe this particular class exhibits that quality in abundance.”

The Illini’s 2021 class brings a lot of power and variety to the team. Berkmeyer is a dual-threat with experience at third base and catcher, bringing a “big bat” to the offense. Caryl is a dominant catcher and a power hitter who adds “patience and a huge presence.” Howard, daughter of former Illini football star Dana Howard, will play in the outfield as she has a “great combination of speed and power.” Krohman has a variety of skills with the ability to play first and third or be a utility player; she brings a lot of strength and power to the roster. Meade, who is an outfielder, adds variety at the plate being a contact hitter and a “hard nose, gutsy player.”

“I’m very excited about their athleticism, the type of people they are, the type of students they are,” Hartleb said. “They’re just very well-rounded. We try and bring in really good athletes who have opportunities to grow and have high ceilings.”

The group includes three right-handed pitchers — Gavin Schmitt, Izaak Siefken and Calvin Shepherd — who Hartleb thinks all “have the ability to come in and pitch right away,” next season.

Siefken and Shepherd are two out-of-state recruits coming from Colorado and Indiana, respectively, and are both top 10 pitching recruits in their states for 2021. Schmitt, a homegrown prospect, comes from Bolingbrook and is No. 18 pitcher in Illinois.

Hartleb added a pair of in-state catchers in Gavin Bennett and Camden Janik. Bennett, who also plays third base, comes from Libertyville and is the No. 10 catcher in the state. Janik, one of the team’s top recruits, comes from Wauconda and is the No. 2 catching prospect in Illinois.

“Catching is very difficult to come by and we have two top-line catchers,” Hartleb said.

Illinois announced the addition of three new players signing letters of intent to join the Illini starting in the 2021-2022 season. The additions include Brooke Mosher, Caroline Barnes and Sarah Bingham.

Mosher went to Waterloo High School in Wisconsin and played outside hitter. At Illinois, she’s slated to be a setter, so her experience as an outside hitter will bring versatility to the roster. Mosher is highly accomplished as she’s been named First-Team All-State by the Wisconsin Volleyball Coaches Association twice and has the all-time record for most kills and aces at Waterloo. With Diana Brown as the only other young setter on the roster, Mosher may factor in strongly for years to come.

Barnes, an Illinois native, went to Benet Academy and will be a libero/defensive specialist for the Illini. At 5-foot 11, she slots in as the tallest libero or defensive specialist on the roster, giving her extra range. She comes from a volleyball family with her older sister currently playing at Wisconsin, so she may be a bit more seasoned as joins Illinois.

Bingham, a 6-foot 3 middle blocker/outside hitter from Fairway, Kansas has had a highly successful high school and club volleyball career. She was ranked 119 in PrepVolleyball.com’s list of 150 senior aces and was a four-year varsity starter for Shawnee Mission East High School. Behind a crowded group of young middle blockers and outside hitters at Illinois, Bingham will need to prove a lot to earn playing time early on.

“It’s been neat to track their progress and see them develop both as people and as players,” head coach Chris Tamas said. “The excitement builds as time goes on and we’re excited to have them here on campus next year. To see them out on the court and out in the orange and blue is an exciting time for them and for us.”

On the first day of the National Letter of Intent signing period, Illinois announced five signings.

The first signing announced was Ella Karolak, a defender and midfielder from Grosse Pointe, Michigan and club team Michigan Hawks.

Maeve Jones is a forward from Frisco, Texas, who will be joining the many forwards on the roster like Makenna Silber and Julia Eichenbaum. Jones is coming from the FC Dallas Girls Academy and Reedy High School.

Naomi Jackson, Angie Galo and Maddie Mariani are all signees from Illinois. Jones, a goalkeeper, will be joining current freshmen Julia Cili and Natalie Phelps next year. The Freeport native will be coming from Freeport High School and the club team Rockford Raptors. Galo, a defender, and Mariani, a midfielder, are both from Wheaton and both play for Wheaton North High School and Sockers FC Chicago.

The Illinois programs had seven total athletes sign their NLIs on Wednesday, including six for the women’s program and one for the men’s.