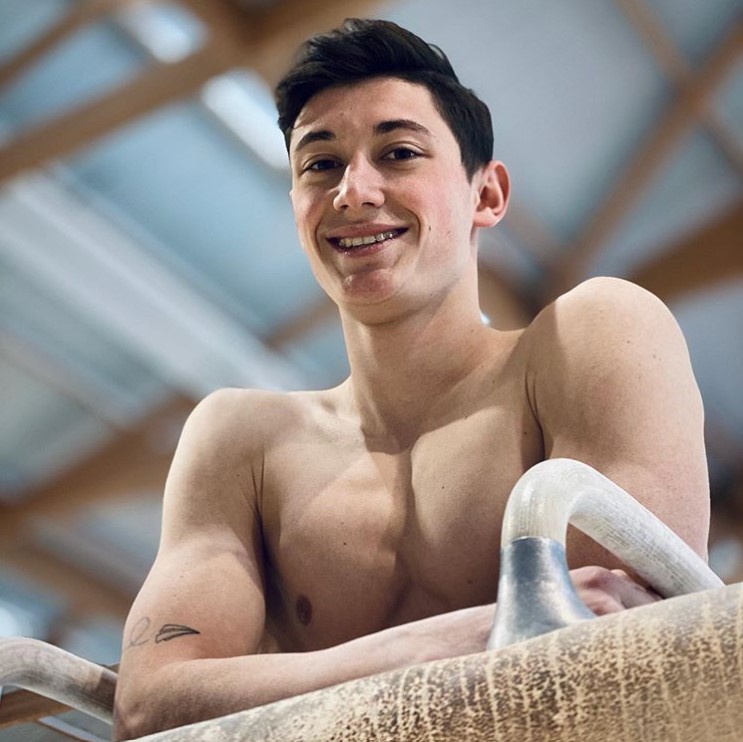 Graduate student Léo Valentin poses on a pommel horse. Valentin came to Illinois for gymnastics because he couldn’t continue his studies and compete in his home country of France.

In the 10 years Justin Spring has been the head coach of the Illinois men’s gymnastics team, he has coached five gymnasts who were born outside the United States, including three currently on the team. All five of them are from either Australia or the United Kingdom — to Spring’s knowledge, there has never been an Illini gymnast from France.

The addition of Léo Valentin to the team this season changes that.

Hailing from Paris, Valentin joins the Illini as a graduate transfer with two years of NCAA eligibility. He received his bachelor’s degree in banking and finance in France in the summer of 2019, but he would not have been able to continue his gymnastics career while pursuing a master’s degree in the French educational system.

“There’s no partnership between any graduate school and gymnastics in France,” Valentin said. “There is a club team on one side and there is the school on the other side; there is no connection between them. Here (at Illinois) it’s completely different. There is a team and it’s easy to train. That was the goal: being able to train every day and follow my studies.”

Looking elsewhere to continue his education and gymnastics career, Valentin was interested in the NCAA and Illinois because he watched junior Hamish Carter make the same journey from Great Britain. Carter and Valentin have known each other for years after competing in Europe for their respective countries. Last December, Valentin reached out to Carter via Instagram and asked him about the Illinois program, the NCAA and why Carter chose to compete in this system.

“He wondered why I decided to move to the university program, given the position I was in in the (Great Britain) squad. He wanted to know why I came here, what were the benefits, what was the program like,” Carter said. “It’s not very often international athletes who are a part of the national team move to the university program. That’s why it sparked his interest, seeing me move here and being good friends with him, he decided to reach out.”

Having peaked Valentin’s interest, Carter then directed him to Spring to start the process of bringing Valentin to the Illini.

“(Valentin) started emailing us and one thing led to another,” Spring said. “The opportunity was right (to have him on the team), and here he is.”

Valentin and Spring finalized the process in January, allowing Valentin to compete for the Illini while receiving his master’s degree in finance from the University.

Two months later, however, COVID-19 burst onto the world stage. France went into a complete lockdown, with citizens being prohibited from leaving their homes unless purchasing essential goods. The U.S. embassy in Paris was closed during the lockdown, casting serious doubt on the likelihood of Valentin obtaining a visa to live in the U.S. for the fall semester.

“We were worried and wondering if he was going to be able to get into the country,” Spring said. “It was amidst a pretty solid lockdown, so we were panicking.”

But the embassy opened in late July and Valentin was granted a visa at what he described as “the last minute.” He arrived in Champaign on Aug. 10, marking the first time he actually visited the place he would call home for the next two years.

He did, however, have to quarantine for 14 days in an apartment he had yet to make into his Champaign home.

“It was a very long two weeks,” Valentin said. “I was excited about starting a new life but at the same time, it wasn’t possible yet.”

Valentin has since joined his new teammates in Kenney Gym, building a rapport with them and getting ready for the 2021 season.

“I’m feeling good. I’m making progress on skills, we’re starting to work on routines, which is really great,” Valentin said. “Still a lot of work to do but I really enjoy it, and I feel like I can really push hard and achieve something here.”

“I’m super excited to have him,” Carter said. “It’s cool knowing someone for many years and our paths crossing a few times and eventually we end up on the same team. We’re both from different countries, yet here we are in the U.S. competing for Illinois.”

In the gym, Valentin is an all-around gymnast, but cites floor exercise, high bar and vault as his favorite apparatuses. He also has national and international experience — he was a member of the French junior national team for three years and was a substitute for France at the European Men’s Artistic Gymnastics Championships. Though he has plenty of junior experience, his senior experience is limited; a torn ACL in January of 2019 and the COVID-19 pandemic resulted in him losing almost two years of competition experience.

Nonetheless, his all-around skill is something Spring believes will be valuable to the team for the next two years.

“At the age he’s coming in, he’s at the prime of his gymnastics career. It’s pretty incredible where he’s at,” Spring said. “He’s going to be a great all-arounder for us for his two years here. We’re very excited about that.”

Valentin hopes to use his experience with Illinois to join the French senior national team before competing in front of a home crowd at the 2024 Summer Olympics, which will take place in Paris.