Andre Curbelo excited for opportunity to play alongside talented backcourt 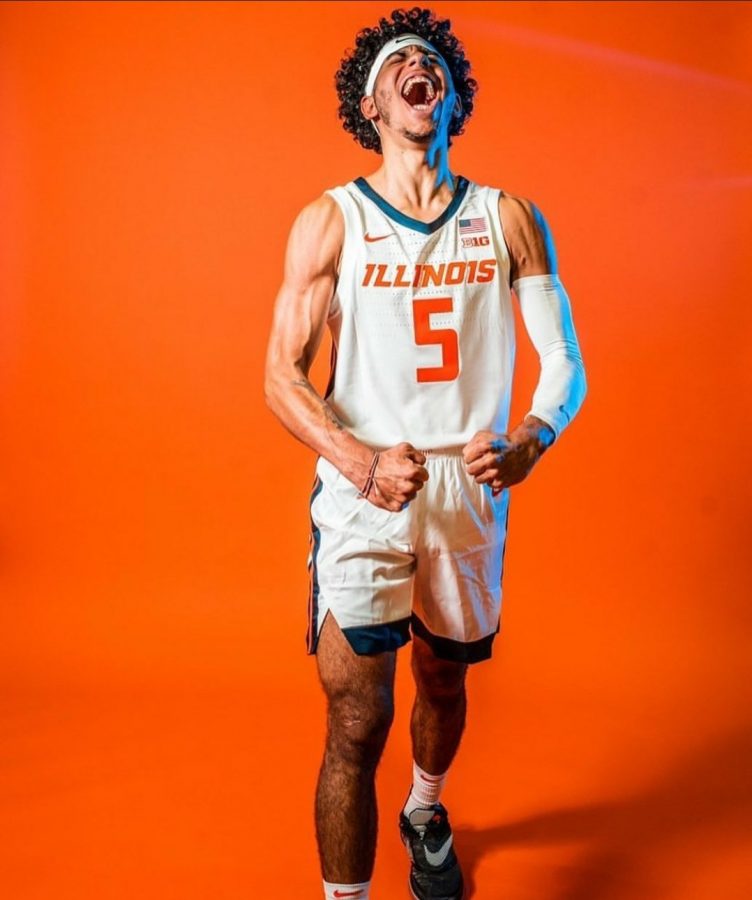 Freshman guard Andre Curbelo poses for a promotional image. Curbelo gears up for basketball season by bringing his best to practice and the weight room.

In the first half of a nationally televised game against powerhouse Sierra Canyon, freshman guard Andre Curbelo faced a double team in the backcourt. Rather than panic, Curbelo retreated, took one dribble backward and threw the ball through the legs of the opposing defender.

Curbelo sprinted past the defender, continued dribbling down the court and finished a one-legged floater that got the crowd on its feet. This type of poise and basketball brilliance on the national stage is just some of what the Puerto Rico native will bring to Illinois this season.

While Curbelo was the star at Long Island Lutheran, he enters a crowded backcourt in Champaign this season. Returning players include starting guards junior Ayo Dosunmu and senior Trent Frazier, along with four-star guard freshman Adam Miller and Division III transfer Austin Hutcherson. Competing against that talent has been an adjustment, but Curbelo is enjoying the competition.

“I’m literally exhausted after every practice just having to guard pros,” Curbelo said. “I think it’s always a good test to guard Adam, Da’Monte, Ayo or Trent, whoever it is.”

Being a point guard, Curbelo prides himself in being observant. He said he likes to study his teammates’ tendencies so he can do things like pass them the ball in the spots they want it. For an Illinois team that was in the bottom half of the Big Ten in three-point shooting, this could help improve that facet of its offense.

While Curbelo succeeded in high school, he knew he needed to bulk up to play at the next level. Curbelo described himself as “lazy” in the weight room when he was in Puerto Rico, but when he came to the U.S., that changed. Working with strength coach Adam Fletcher, Curbelo has already put on 21 pounds. This added weight has only helped him on the court.

“I think it’s helped me a lot during practices because being a freshman and less strong than the older guys, I can now bump into them with my chest,” Curbelo said. “I can play faster without getting as tired. Fletch is probably one of the best in the country.”

Curbelo’s commitment to getting better and improving has already made a positive impact on his teammates. graduate student guard Tyler Underwood has been blown away with Curbelo’s maturity.

“One thing that has impressed me about ‘Belo is his level of maturity that he’s come in here with,” Underwood said. “I was not that mature at 18. The way he carries himself, he acts like a professional, he works really hard and he asks questions and wants to be coached. He wants to learn.”

It remains to be seen if Curbelo will be in the starting lineup on night one. With Dosunmu and Frazier back, that leaves just one spot for Curbelo or Miller. Miller’s shooting may make him a better fit next to Dosunmu. Curbelo could have success as the offensive creator when Dosunmu sits, which is a luxury for the Illini.

Regardless, Curbelo is excited for the opportunity to play with multiple ball-handlers and isn’t worried about what guard spot he fills.

“We’re so diverse,” Curbelo said. “ We have so many different guys that can do different things. When they’re doing that, I can be more on the wing and be a shooter, just produce in different ways. I don’t need the ball in my hands to do that.”